Conservatives will use Jussie Smollett to hide the truth about hate crimes: They can't

One false police report: Sure, it's bad. But it can't hide the steady drumbeat of violence coming from the right 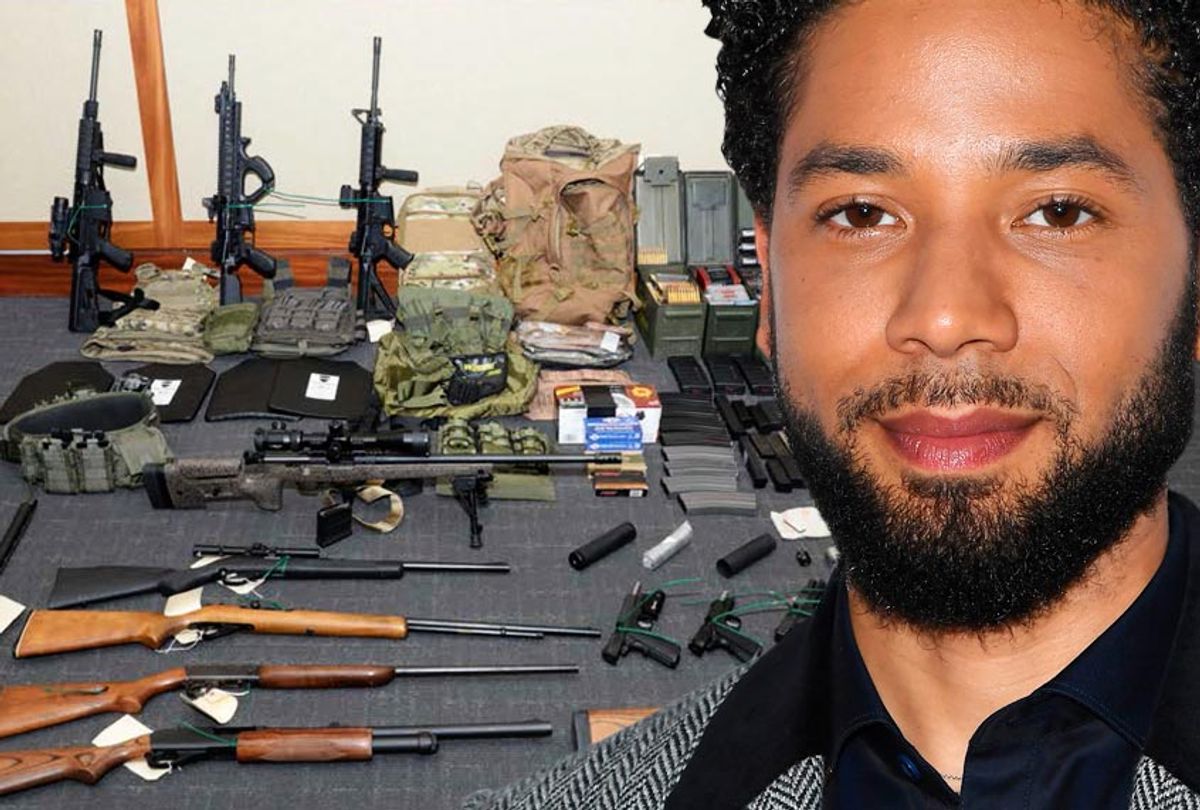 Jussie Smollett; Firearms and ammunition that were in the motion for detention pending trial in the case against Christopher Paul Hasson. (Getty/Angela Weiss/U.S. District Court via AP)
--

The arrest of "Empire" actor Jussie Smollett for allegedly faking a hate crime against himself arrived like an extra Christmas for Donald Trump and his devoted propagandists.

For years, Trump has been mainstreaming overtly racist rhetoric and encouraging political violence. As we should all remember, he even said that those who marched with violent neo-Nazis in Charlottesville were "fine people," and defending the Saudi crown prince who likely ordered a murder of journalist Jamal Khashoggi, a legal resident of the U.S. Right-wing punditry have gone along enthusiastically, with Tucker Carlson and Laura Ingraham in particular gradually increasing the level of white nationalist talking points and themes on their top-rated prime-time Fox News shows.

That all this would lead to an escalation of hate crimes and domestic terrorism was entirely predictable, of course, but that wasn't likely to slow down Trump or his media allies. Instead, the focus has been on minimizing and deflecting these issues, largely by insinuating that liberals are exaggerating or even making things up when they point to the violent consequences. There's also the ever-popular "both sides do it" argument, carrying the implication that, if anything, right-wingers are the real victims here.

So when Smollett was accused of faking a hate crime -- and apparently seeking to blame it on Trump supporters -- the giddiness on the right was palpable. This single case, which has mesmerized the national media, looked like a perfect way to discredit the vast majority of all-too-real hate crimes and bolster the claim that liberals are just making things up. For years to come, right-wing trolls will have a weapon they can use to blast their way out of any serious discussion about the problem of hate crimes.

The troll-in-chief, of course, joined in on the fun:

But before the right had a chance to make Smollett a household name to the Fox News viewership -- who quite likely had never heard of him -- we got a massive reminder that, oh yeah, right-wing terrorism is a real and urgent problem, A Coast Guard lieutenant named Christopher Hasson was arrested in Maryland after federal authorities discovered he was planning a massive right wing terrorist attack. Hasson had amassed a major weapons cache, had planned to murder a number of Democratic politicians and mainstream media figures who have been hate objects for Trump and the conservative media in recent years.

This arrest was a cold reminder of why it's so difficult for conservative pundits to minimize or deny right-wing terrorism: There's just too much of it to ignore.

Angry at having their Smollett-driven denialist narrative disrupted like this, some conservative pundits lashed out. Ingraham complained that "the media has jumped on the story of that whack-job Coast Guard lieutenant who wanted to murder Democrat politicians," which she considered a distraction from the far more important news of a black TV actor story.

At National Review, Kevin Williamson dismissed "the predictable response from the Left" of bringing up Hasson by arguing that since Hasson "is going away for a long time, possibly forever," he's not sure what the "Left" is even trying to say.

Williamson is arguing in bad faith, as is his habit. He knows full well what the "Left" is pointing out: Smollett's alleged crime does not in any way, shape or form invalidate concerns about hate crimes or exonerate Trump and his supporters for sowing rhetoric that encourages hate crimes. It is also worth noting that Smollett has also been arrested and could indeed end up doing time, which makes Williamson's "you can't talk about the larger political implications if the person is arrested" argument almost comically incoherent.

One would think that even people suffering from moral myopia as severe as that afflicting Williamson and Ingraham would stop short of suggesting that it's somehow worse to fake an assault on yourself and file a false police report than to plan a massive campaign of political assassination. But then again, these are folks who don't seem inspired to dial down the bigoted rhetoric even when they know perfectly well that right-wing terrorism is on the rise.

Hasson's reported plans and his apparent white supremacist obsessions fit into a larger pattern that has become numbingly familiar. In 2018 alone, there was a shooting at a Pittsburgh synagogue that killed 11 people, a Trump-loving bomber who tried to murder various journalists and celebrities as well as Hillary Clinton and Barack Obama, a self-proclaimed "sovereign citizen" who murdered four people at a Waffle House in Nashville, a Kentucky white supremacist who killed two black people at a grocery store, and a misogynist who murdered two women at a yoga studio. The school shooting in Parkland, Florida, where 17 people died may be another example, as the shooter appears to have had alt-right obsessions himself.

A new report released just this week by the Southern Poverty Law Center shows that the number of hate groups in the U.S. has risen by 30 percent in the past few years, rising to over 1,000 groups.

But that statistic by itself underrates the seriousness of the problem. Nowadays, white supremacists and other possibly violent bigots are less likely to organize formally through groups like the KKK or the Traditionalist Worker Party. Instead, most white supremacists are loosely organized online. James Fields, the man who killed Heather Heyer with his car at the Charlottesville riot in 2017, is atypical in that he was aligned with a formal group. As the above examples show, many or most hate crimes or right-wing terrorist plots involve individuals who self-radicalize online before they commit crimes.

That fact implicates Trump and his allies in conservative media even more in the rise of right-wing terrorism than would have been likely in the past. Social media researcher Zeynep Tufekci has detailed how people who watch a video by, say, Carlson or Ingraham on YouTube are generally then presented with more videos that are far more hardcore and conspiratorial. Just by clicking "next video," it's only a few steps from hearing Carlson complain about how "elites" are using "immigration" to change "demographics" to hearing an overt white supremacist make the same argument but in language that overtly blames Jews and uses racial slurs or terms like "white genocide."

Everyone in conservative media has a choice. They could stop offering White Nationalism Lite segments on Fox News. They could stop supporting Trump. They could call Trump out when he maligns journalists as the "enemy of the people," characterizes immigrants as criminals, and obsesses over the supposed ingratitude of black athletes who protest against racism or police brutality. They could, in other words, stop feeding an atmosphere of bigotry and hate that leads to more hate crimes.

But they don't want to. Instead, they want to cling to Smollett's alleged misdeed, which was stupid and selfish but thankfully highly unusual, and did not seriously endanger anyone except himself, as a way to deflect criticism away from their own immoral behavior. But the problem of right-wing terrorism in America has become so severe, sadly, that even the most frantic hand-waving from conservative pundits cannot hide the truth.