Sen. Sheldon Whitehouse on boosting the Green New Deal and not running for president (yet) 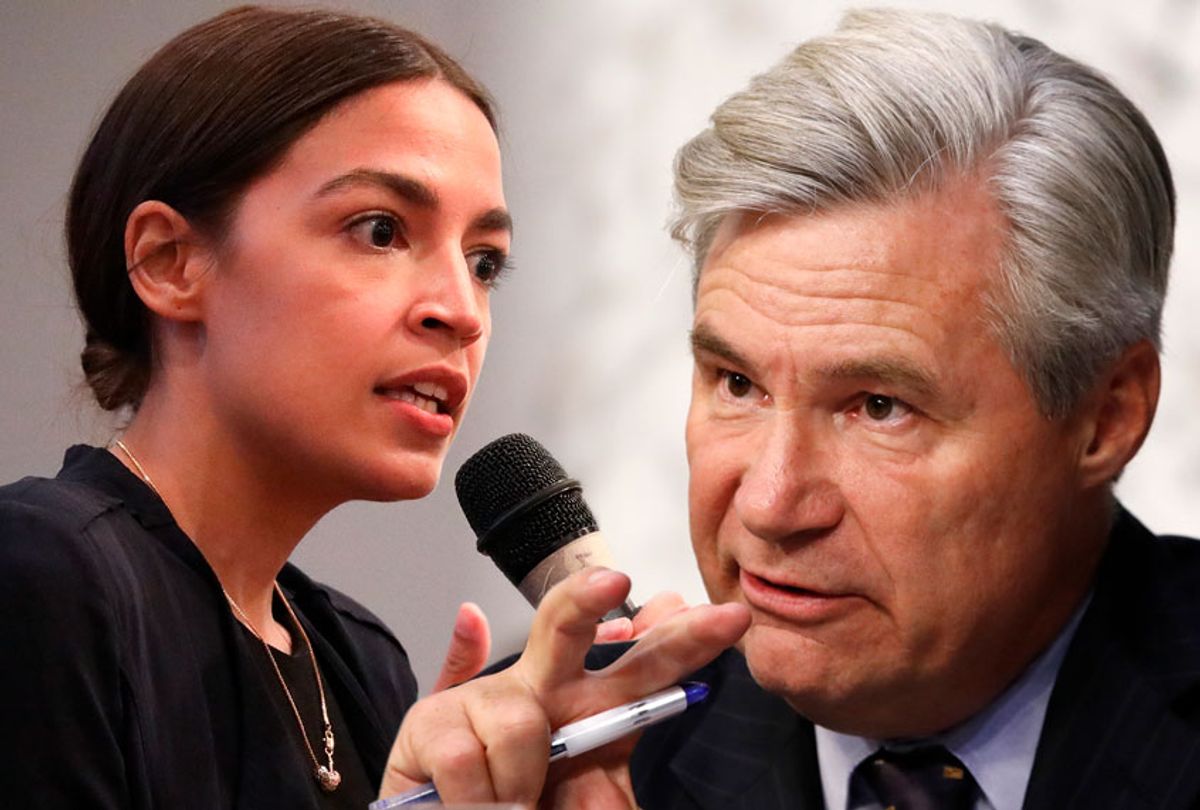 Is Sen. Sheldon Whitehouse, a progressive Democrat from Rhode Island, ready to join the long and growing list of U.S. senators who are running for president in 2020? I asked him this, and his answer was emphatic: "No." The assistant who set up the interview told me the same thing in advance: Despite a surname that practically begs for headlines, Whitehouse isn't running. (At least not this time.)

This isn't to say Whitehouse plans on staying quiet. He has emerged as a leading Senate champion of the Green New Deal, — the ambitious package of environmental and economic reforms recently popularized by Rep. Alexandria Ocasio-Cortez, D-N.Y. In one document posted on Ocasio-Cortez's website (and later taken down), the Green New Deal was defined by a set of goals: achieving "net-zero greenhouse gas emissions," moving America to 100 percent "clean and renewable energy" and realizing Franklin D. Roosevelt's vision of an Economic Bill of Rights by guaranteeing good-paying jobs, health care, education and housing for all, along with economic security for those unable to work.

Not every Democrat supports all those goals, by a long shot. As Whitehouse made clear in our conversation, the Green New Deal is in an early developmental stage and its exact policy content is likely to evolve considerably. But for many progressives, the Green New Deal establishes a positive agenda that can helps the Democratic Party emerge as something more than a catch-basin for everyone who opposes Donald Trump.

Senate Majority Leader Mitch McConnell apparently believes that  forcing an early vote on the Green New Deal may damage Democrats politically, and some Democratic presidential candidates have been notably reluctant to embrace it. Whitehouse believes it's time for his party to seize the moment ... and change the world in the process.

He plans on being there when this legislation is enacted -- but not as the person who signs it.

This interview has been lightly edited for clarity and context.

Republicans have been reacting with -- I think "terror" would be an accurate word -- to the concept of a Green New Deal. Sen. Tom Cotton said the media's coverage of it has been Stalin-like. A deleted summary from Rep. Alexandria Ocasio-Cortez's website was entered into the congressional record. Rep. Liz Cheney has attacking it. Why are they so scared of this/

Well, I think it is significant to watch the Republican heads explode over it and to hear the invective and falsehood that are thrown at it. It reminds me a little bit about when Democrats were trying to set up Medicare years ago, and Republicans who were fighting Medicare insisted it was socialized medicine. This is a little bit the 2019 replay of that same Republican playbook. I do think that the Green New Deal brings new energy to the climate debate.

What [Senate Majority Leader] Mitch McConnell is up to is to try to use the fact that we're still at an early stage in negotiating a climate bill amongst ourselves to try to foment division. When in fact, we have a very strong common Democratic purpose to work together to get a very significant climate bill passed.

What are your specific thoughts on the Green New Deal, in terms of your own individual interpretation of what it means and what should be included?

The Green New Deal at this point is only a resolution that hasn't even approached legislative language. Hearings have not yet been held. In the Senate alone, there are carbon-price bills on the Democrats side, "Keep It in the Ground" bills on the Democratic side -- a variety of smaller bills for different economic sectors that address climate change and the general prospect of a Green New Deal.

Our job as legislators is to walk through those various pieces of legislation, and pull something together that keep the 1.5-degree [increase] climate threshold that is most likely to actually get passed, and that maximizes all the collateral benefits for society in passing it as a significant climate bill.

From what I've read, both on Ocasio-Cortez's website, and in just in general from the progressive commentators, this is about more than just addressing climate change. It's about radically overhauling how ordinary people live, providing a stronger social safety net for people who are in poverty, increasing the standard of living, guaranteeing benefits. It's really trying to realize Franklin Roosevelt's vision as embodied in the Economic Bill of Right from 1944. Is it really possible to accomplish that, in addition to accomplishing the environmental reforms necessitated by climate change?

Well, first of all, let me just back off a little bit on your last comment. I don't think what we're proposing to address climate change is radical. I think what's really radical is the Republican notion that climate change is a hoax, that it shouldn't be addressed, and that they are conveniently ignorant about the science and the facts. That, to me, is an extraordinarily radical proposition, and it may even be a worse than radical proposition once we understand the extent of fossil-fuel funding in the Republican Party.

I'm not going to accept being painted into the radical corner when we try to solve this problem, when I think the radical action here is the way that the Republican Party is misbehaving.

For what it's worth, I don't perceive fighting climate change as being a radical solution. But I believe it's important to try to, one might say, play devil's advocate in terms of acknowledging the arguments that will inevitably be made …

The socialized medicine argument about Medicare. We've seen this game before. We usually power our way through it. To the first part of your question, I would say that the Green New Deal has been expressed in an array of policy recommendations that have an extraordinarily worthy purpose, which is to offset the increasing income inequality in the country, and the increasing share of the country's political power and economic power which is controlled by a smaller and smaller number of extraordinarily wealthy people and families and corporations.

All of that, I think, makes a lot sense. Even Franklin Roosevelt didn't get his New Deal passed in one bill. It was more a statement of purpose. What we have to do, the same way Franklin Roosevelt had to do it, is work together with Congress to pass section-by-section laws that will solve the climate problem before it gets out of hand. After doing that, rebalance what the traditional balance of power has been in American politics and in the American economy. Arrest and reverse the slide in both of those areas of power and money to those that already have the most of it.

There's a reason the Tea Party were serious, and that voters supported Trump, and that voters came out to support Bernie [Sanders] and other authentic — recent in Trump's case — authentic, new and disruptive points of view. That’s because, I think people in America can see and feel and breathe that something is amiss in this country, but they don't have power in Congress any longer. They don't have a fair share of the country's wealth and revenues any longer, and those things are demonstrable and factual.

They're absolutely right to be furious about it, and we need to address that concern. To some extent, the way forward on the climate problem helps address that concern. That’s a very significant plus, not just for liberal politics, and certainly not for "socialism," but for the way America has always worked. It's just -- we're in a Gilded Age.

I'm actually writing my dissertation about The Gilded Age.

Welcome to the new one.

I think we've been in the new one since Ronald Reagan became president.

We’ve been sliding into it since then. It certainly has ended up there in recent years.

Why did you decide you would not try to put Whitehouse in the White House in 2020? I mean, the slogan writes itself.

[Laughter.] I think we have quite enough members of the Senate running for the White House right now. In fact, if anything, I think my best role here in the Senate is to set up a little support group, which could be in a very small room, for all the senators who aren't running for president.