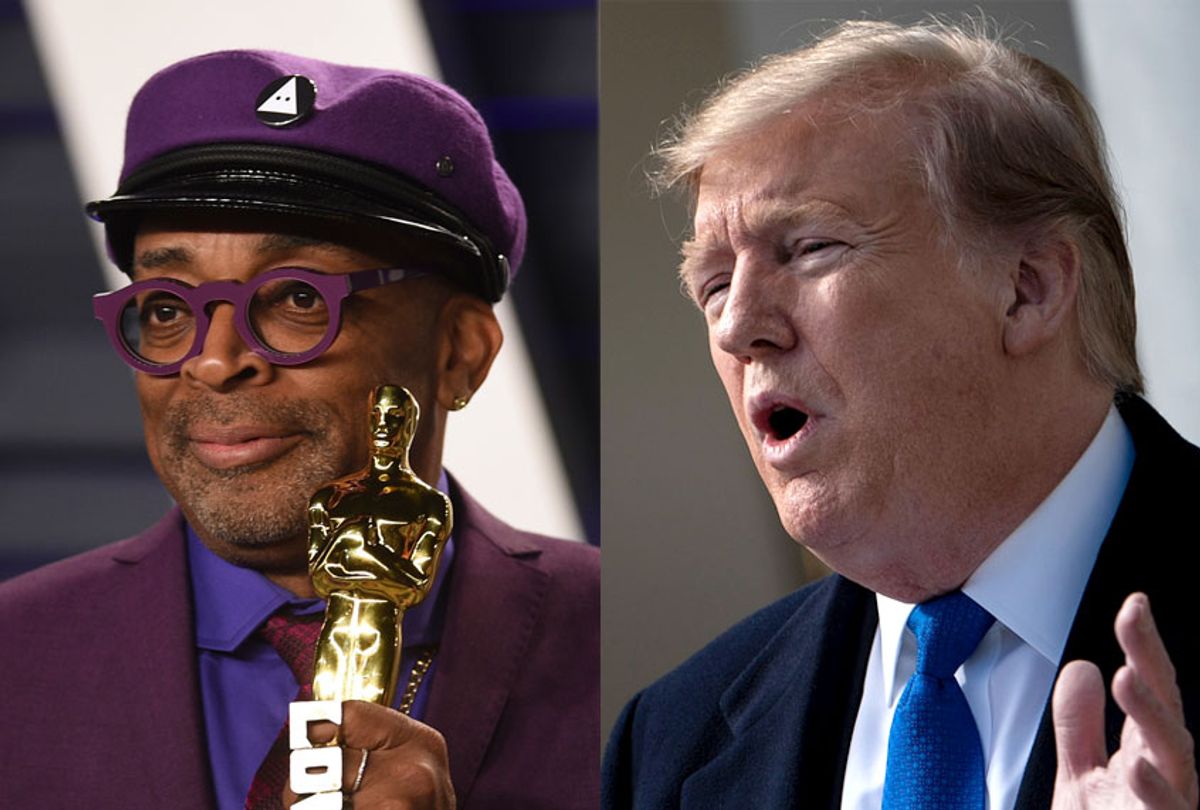 President Trump attacked "BlacKkKlansman" director Spike Lee after the acclaimed filmmaker delivered an Oscar ceremony speech that apparently urged voters to throw Trump out of office in the 2020 election.

"Be nice if Spike Lee could read his notes, or better yet not have to use notes at all, when doing his racist hit on your President, who has done more for African Americans (Criminal Justice Reform, Lowest Unemployment numbers in History, Tax Cuts,etc.) than almost any other Pres!" Trump tweeted early on Monday morning.

In his speech, Lee talked about America's fraught racial history and placed his political comments about Trump within that larger narrative.

"The word today is irony. The date, the 24th. The month, February, which also happens to be the shortest month of the year ... which also happens to be Black History Month," Lee told the Oscars audience. "The year 2019, the year 1619. History, herstory, 1619, 2019. Four hundred years. Four hundred years our ancestors were stolen from Africa and brought to Jamestown, Virginia, enslaved."

From there the director discussed how his ancestors had worked on the land from morning until night, how his grandmother had graduated from Spelman College even though her mother was a slave, how his mother needed Social Security checks to survive and put him through Morehouse College and NYU film school, and how African-Americans built this country even amid the genocide against Native Americans. Then he segued to talking about the 2020 presidential election.

"The 2020 presidential election is around the corner," Lee said. "Let's all mobilize. Let's all be on the right side of history. Make the moral choice between love versus hate. Let's do the right thing! You know I had to get that in there!"

In the unlikely event anyone missed the reference, Lee was recalling his 1989 film "Do the Right Thing," which is now viewed as a classic but won no Oscars that year and was not even nominated as best picture.

This wasn't the first occasion when Lee has denounced Trump while discussing "BlacKkKlansman." In May, when asked a question at the Cannes Film Festival about his decision to include footage of the 2017 Charlottesville protest at the end of the movie, Lee made a broader point about the Trump administration.

"And we have a guy in the White House — I’m not gonna say his fucking name — who defined that moment not just for Americans but the world, and that motherfucker was given the chance to say we are about love, not hate," Lee told the reporters at Cannes. "And that motherfucker did not denounce the motherfucking Klan, the alt-right, and those Nazi motherfuckers. It was a defining moment, and he could have said to the world, not just the United States, that we were better than that."