Is Amy Klobuchar being smeared by sexist "mean boss" stories?

The New York Times joined other outlets in reporting on Klobuchar as mistreating her staff. What now? 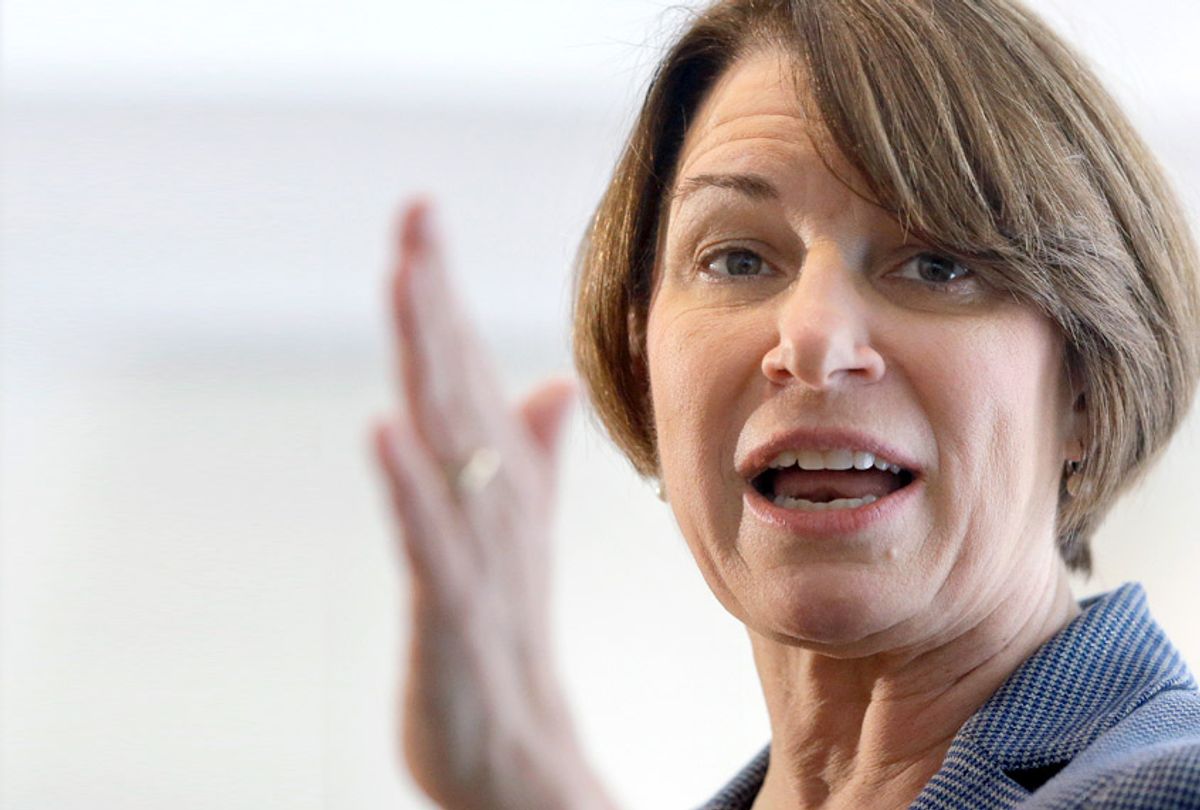 On Friday, the New York Times published a story with a deceptively understated headline: “How Amy Klobuchar Treats Her Staff.” The first implication carried by such a headline is “poorly,” of course — happy workplace families, being all alike, are not stories. The second is “exceptionally so,” positioned as crucial information for voters to have going forward into the interminable Democratic presidential primary.

Is it, though? Or is the question of whether or not voters should care about how aggressively the Democratic Senator from Minnesota manages her staff going to be lost in the fight over the framing, which critics lambaste as sexist axe-grinding while defenders insist it’s a labor issue and therefore fair game?

The Times’ reporting followed scoops from HuffPo and BuzzFeed News that broke earlier this month, describing her as “habitually demeaning and prone to bursts of cruelty” (HuffPo), and framing the stories of her “explosive rage and regular humiliation” (BuzzFeed) as concern over Klobuchar's potential efficacy as president, likening her to Donald Trump:

The first former staffer said they believed it was important for voters to be aware of what went on behind closed doors because they saw echoes of Klobuchar’s behavior in the chaos of the current administration.

“The reason it matters is when I hear the descriptors of our current president and how he lacks responsibility and everyone is to blame, and there’s erratic behavior, name-calling,” she said. “It’s unfortunate, but you’re also describing her.”

It's a stretch to suggest a major problem of the current administration is its chaotic White House staffing, in which the amoral goons and strivers attracted to this particular presidency aren't always allowed to hang around long enough to be truly and horrifically effective. Trump continuing to be an erratic boss ranks somewhere around “chowing down in Ike Perlmutter’s ear during nightly phone time” on my own exhaustive list of his personal and professional disqualifiers, but your mileage may vary.

Dozens of former staffers have pushed back against the negative stories in an open letter published on Medium, claiming that the positive tales they related about working for Klobuchar, whom they say “pushed us to be better professionals, and public servants,” were “not fully reported by the Times and other media.” Noted! Surely they will remain on the holiday card list now. Meanwhile, some of the inside sources are offended over the criticism of the stories as sexist and have pushed back against the backlash.

A bit lost in all of this back and forth is the question of whether the reported behavior truly renders Amy Klobuchar uniquely unfit for the office of President among her peers.

People who see their own workplace frustrations reflected in the reported scenarios will say yes, and maybe even with a little vicarious thrill — who among us hasn’t been tempted at least once to go on record with the war stories we swap discreetly over drinks instead? Those subscribing to the suck-it-up school might be underwhelmed by the evidence, harsh and yet also bordering on slapstick, like the bizarre comb-eating story, the accidental blow from an irresponsibly chucked binder, and the Grimmsian threat to trade multiple aides for one bottle of water on a hot day. The two camps aren’t as far apart as they sound, either, and likely even enjoy significant overlap. As the Drew Carey quote goes, “You hate your job? Oh my god, why didn’t you say so? You know, there’s a support group for that. It’s called Everybody. They meet at the bar.”

The leadership ethos of “break you down to build you back up” is not one that I am personally attracted to, but it would be silly to pretend it doesn’t persist throughout our culture in areas where elite achievements are pursued, from sports to graduate and professional schools and industries led by massive egos with a lot of money and power on the line. Professional or educational hazing is ostensibly designed to weed out the ones who can’t hack it, as they say, while those who do stick it out reap eventual rewards, supposedly. I don’t know if Klobuchar is following this particular philosophy intentionally, as so many leaders have before her, in order to, as one former aide put it to BuzzFeed, “get shit done for Minnesota,” or simply giving into the worst impulses of the personality type that would see running for high office as a thing to do rather than avoid. As it turns out, actual people who have worked for Klobuchar remain publicly split on that front as well.

The stories about Klobuchar's management take pains to point out that yes, sexism in media narratives around women candidates exists, but then dismisses the idea that it is influencing Klobuchar's reputation or the media's desire to report on it. Is it possible that all former aides' accounts are entirely objective, devoid of traces of the ambient sexism that swirls around us every day in a culture that still can't stomach giving women as much power as men, that demands more emotional caretaking from them once they have it, and penalizes them for the exact same (and at times harmful) acts for which men are typically rewarded? Let's hope so. But until every story about Joe Biden’s potential candidacy includes a reference to former aide turned lobbyist Jeff Connaughton's book painting Biden as an “egomaniacal autocrat” who referred to him as “Dumb F**k” at work, contra to the the former vice president’s current image as lovable straight-talkin’ Uncle Joe, a healthy skepticism overall about how much meaning to read into a powerful woman's reported "wrath" can't hurt.

So what are we to do with these tales of one anxiety-riddled workplace, useful as a Rorschach test at best and an irreconcilable The Dress fight at worst? Hopefully we are capable of being alert to how sexism shapes our collective assumptions about women in power while working toward securing workplace dignity for all employees at the same time. We can hold Amy Klobuchar and all candidates to the fire when it comes to setting a policy vision that empowers workers at all levels — not only those in their rarified professional orbits — from the Facebook and Amazon subcontractor employees whose restroom breaks are regulated to a dehumanizing level to retail workers bound by unnecessary, restrictive and punitive noncompete agreements. We can insist that every candidate talking about jobs on the campaign trail — because they will all be talking about job creation — lay forth a clear plan for how we can shape the American workplace into one that is more just, more humane, less discriminatory — and yes, less sexist — than the ones Klobuchar likely came up in, and the one she runs now.