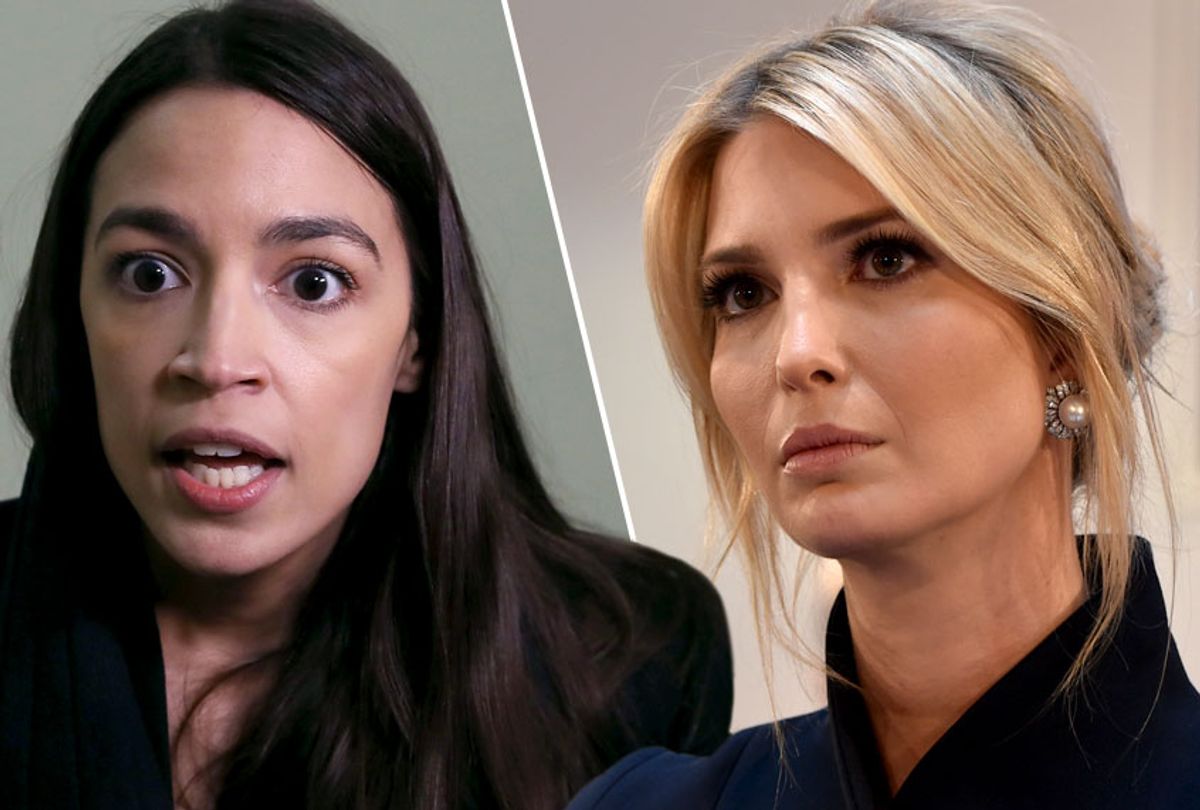 Rep. Alexandria Ocasio-Cortez (D-N.Y.) took a jab at Ivanka Trump after the senior White House adviser said she does not think most people believe in the congresswoman's proposal for universal jobs guarantee.

In an interview released Monday by Fox News, Trump was asked about Ocasio-Cortez's Green New Deal proposal and what she would say to people who are intrigued by the legislation's universal jobs guarantee.  In response, Trump said, "I don't think most Americans in their heart want to be given something."

On Tuesday, the New York Democrat responded to Trump's criticism of a guaranteed living wage by suggesting the president's eldest daughter learned about working for tips and hourly wages second-hand.

"As a person who actually worked for tips & hourly wages in my life, instead of having to learn about it 2nd-hand, I can tell you that most people want to be paid enough to live," Ocasio-Cortez wrote on Twitter. "A living wage isn't a gift, it's a right. Workers are often paid far less than the value they create."

Ocasio-Cortez and Sen. Ed Markey, D-Mass., introduced the Green New Deal proposal along with other congressional Democrats earlier this month. The legislation, co-sponsored by several Democrats running for president in 2020, is designed to combat the threat of climate change by changing the country's environmental policies. It also contains several major economic proposals, including "guaranteeing a job with a family-sustaining wage."

In another Tuesday tweet, Ocasio-Cortez wrote, "In fact, wages are so low today compared to actual worker productivity that they are no longer the reflections of worker value as they used to be. Productivity has grown 6.2x more than pay." The congresswoman linked to an August 2018 report by the left-leaning Economic Policy Institute.

As CNN noted, "Raising the minimum wage has been hotly debated around the country for years. Minimum wage ballot initiatives have won handily in red and purple states, such as South Dakota, Nebraska and Arizona, in the past two election cycles. Initiatives in Florida, Nevada and North Dakota to increase the state minimum wage are already in the works for the presidential ballot in 2020. Congress hasn't raised the federal minimum wage since 2009, when it went to $7.25 an hour."

Trump clarified later on Tuesday that she supports a minimum wage but not "a minimum guarantee for people 'unwilling to work.' "