Can this be real? Trump meets the North Korean dictator, while his former lawyer tells Congress he's a criminal 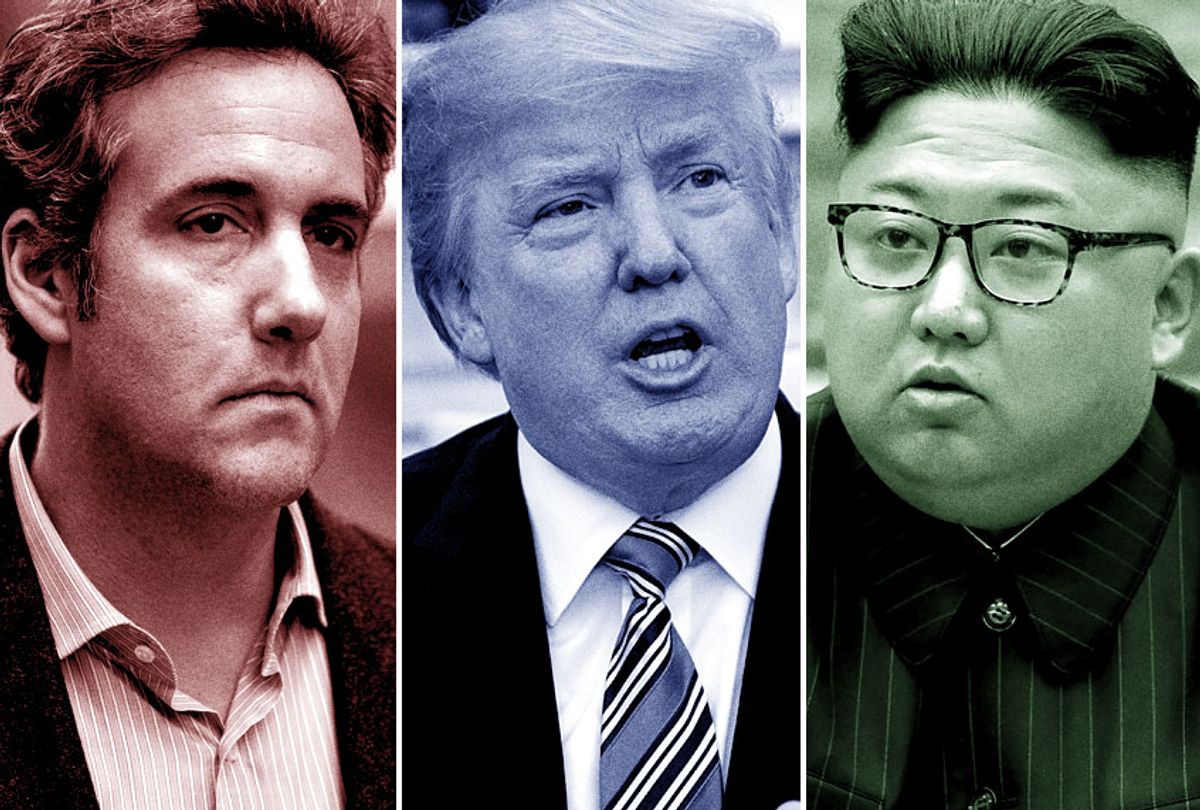 There have been many bizarre moments since Donald Trump came on the political scene. One might even argue that the last three and a half years have been an endless surreal nightmare. But on Wednesday we may reach a Dadaesque pinnacle of strange as we watch a momentous split-screen event unfold, with one side in Washington and the other one halfway around the world in Vietnam. The president is meeting in Hanoi with his BFF, North Korean dictator Kim Jong-un, while his self-proclaimed "fixer," former Trump Organization executive vice president Michel Cohen, testifies before the House Oversight Committee about what he terms Donald Trump's "dirty deeds."

Trump is excited to see his good buddy:

He obviously believes that Kim's motivation is to find opportunities to build condos and golf courses just like him. That's unlikely. As the Wall Street Journal reminds us, Trump's friend "ordered the execution of his uncle, the assassination of his half-brother and is keeping some 100,000 political prisoners locked up in harsh gulags." Trump doesn't care about that. He says they have "chemistry" -- and there are all those beautiful love letters.

There are no great hopes for a breakthrough at this summit, however. It's another Trump international pageant, a spectacle he seems to enjoy almost as much as his campaign events. Even he has uncharacteristically kept expectations somewhat subdued, although we know he'll tout whatever "deal" he makes as the greatest diplomatic breakthrough in human history. Some experts seem to think that this would be the right time to turn up the heat on Kim rather than take Trump's love-bomb approach, but Trump is so over his head that at this point we just have to hope he doesn't decide to give Kim advanced military equipment as a token of his trust and affection.

But as thrilled as Trump may be to see his good pal, he'll be sure to tune in late at night Hanoi time to watch Cohen speak before  Congress. Trump's ebullience may dissipate rapidly when he hears Cohen's prepared testimony, which was released on Tuesday evening:

Oh, my. As the former U.S. attorney for the Southern District of New York has put it:

Cohen says that he witnessed Donald Trump Jr. telling his father, "The meeting is all set" and Trump replying, "That's good, let me know" right around the time of that infamous Trump Tower meeting in June 2016. He also makes clear that Trump was planning that Moscow Trump Tower deal from the beginning and stayed in the loop the whole way. Remember the big brouhaha over the BuzzFeed article alleging that Trump directed Cohen to lie about that project, which special counsel Robert Mueller's office then denied? Well, it turns out Cohen had told the prosecutors that Trump "directs" people to do things without actually saying it. He says that Trump's lawyers reviewed the statement that formed the basis of his guilty plea for lying to Congress before he testified.

Cohen is scathing toward his former boss, saying:

He is a racist.

He is a conman.

He is a cheat.

This is not news. But the onetime fixer is apparently bringing some evidence with him, such as a check signed by Donald Trump dated in 2017, after he was already president. It was allegedly part of Trump's repayment for the Stormy Daniels hush money. Cohen says Trump told him to take out a personal mortgage to do the payout during the campaign, so the money couldn't be traced back to the candidate.

Cohen will also reportedly turn over financial documents that he says Trump used to deflate and inflate his net worth in order to obtain bank loans. If that is true, the president of the United States has committed fraud.

As for the allegations of racism, Cohen relates some ugly anecdotes, none of which are surprising and all of which are undoubtedly the tip of the iceberg. He says that Trump was desperate to keep any of the schools he attended from releasing his records. That's particularly rich considering that Trump made a fetish out of Barack Obama's academic record, even promising to pay a million dollars to Obama's charity of choice if he'd release them, once again proving the theory that most of Trump's insults or personal attacks are projections of his own insecurities onto other people.

Michael Cohen is going to testify that the president of the United States is a criminal. Trump and his supporters, of course, are going to say that since Cohen is an admitted liar nothing he says should be believed. But it's hard to see what Cohen has to gain from lying this time around. He's already going to jail, he's been disbarred and his life as he knew it is gone. He's reportedly talked to Mueller's team and the prosecutors of the Southern District for more than 70 hours, and they aren't playing games with perjury. For him to keep on lying now would be suicidal.

The Republicans seem to understand this on some level, because one of Trump's most loyal henchmen, Rep. Matt Gaetz, R-Fla., tweeted what appeared to be a personal threat intended to get Cohen to back out of his testimony.

Hey, @MichaelCohen212 - Do your wife and father-in-law know about your girlfriends? Maybe tonight would be a good time for that chat. I wonder if she'll remain faithful when you're in prison. She's about to learn a lot ...

Gaetz later apologized and deleted the tweet, but he had accomplished his mission. It failed. It does not appear that Cohen will back off and one supposes he's at least prepared for these despicable personal attacks now. So it's not clear that Gaetz did anything to help his president's cause.

We can expect to see some fire and fury from Trump's Twitter feed once he hears about all this. There's little doubt he will be distracted and on edge during the Kim summit. Fortunately, that won't make much difference in the outcome. Trump is no more likely to make a bad deal if he's unfocused and angry than if he's engaged and upbeat.

But if anyone had told me four years ago that we'd be watching President Donald Trump cavorting with Kim Jong-un in Hanoi at the same moment his longtime personal lawyer told a congressional committee that the president was a racist criminal, I would have told them to sober up and get some sleep. But here we are, watching the most surreal reality show in history unfold on a split screen, and wondering if it's ever going to end.