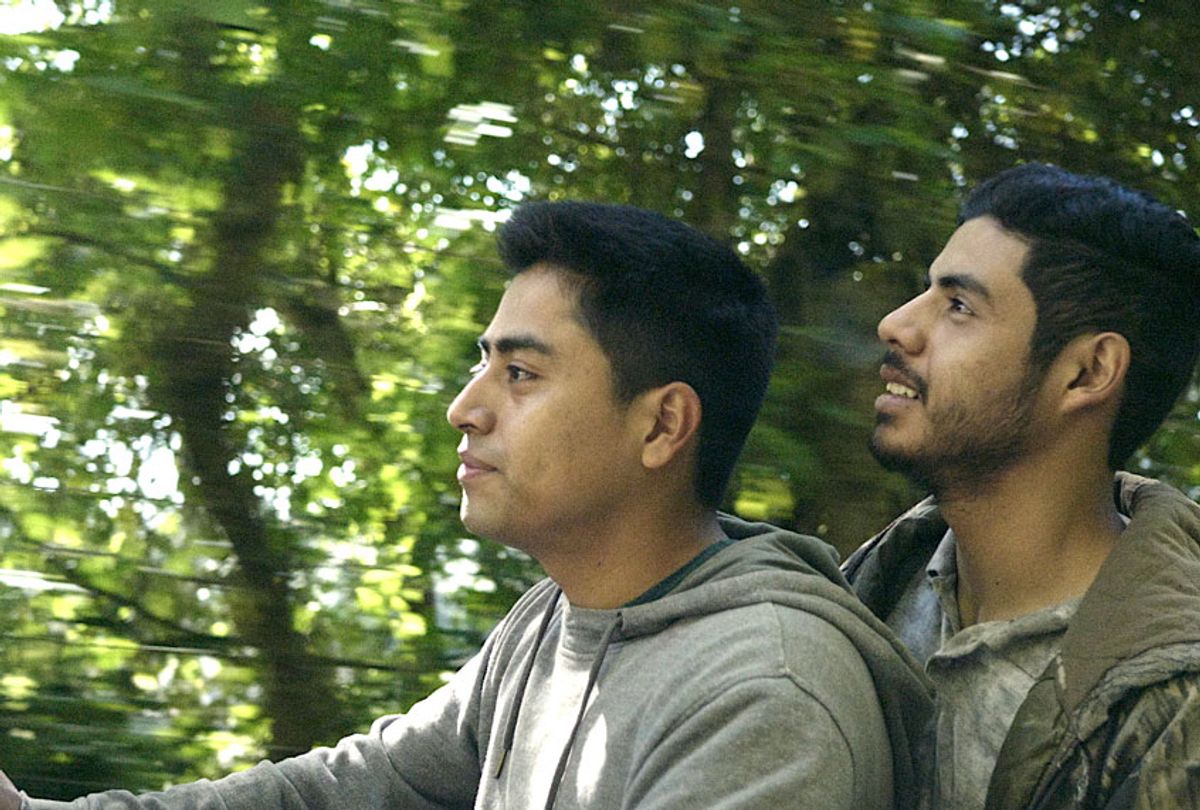 “José” is a remarkable, striking drama about the title character (Enrique Salanic), a 19-year-old gay Guatemalan who lives with his single mother (Ana Cecilia Mota) in a poor neighborhood. He runs food out to cars to earn money, and secretly hooks up with guys for sex. One encounter, with Luis (Manolo Herrera), a construction worker, however, develops into a passionate romance. José then must choose between running off with Luis and remaining at home with his mom who needs him.

Directed by Li Cheng (who co-wrote the film with George F. Roberson), “José” won the Queer Lion at the 2018 Venice Film Festival. It just had its American premiere at the Miami International Film Festival this week, and will be screening in other U.S. festivals, including Latino film festivals in Chicago and San Diego, as well as fests in Hollywood, Boston, and other cities. (The film is currently seeking distribution).

Cheng, who grew up in China, moved to the U.S. 20 years ago to study biology at Rutgers University. He took a job working for a biotech company in Denver before he met Roberson and they went off to make films. (“José” is his sophomore feature). While at the Miami Film Festival, he spoke via FaceTime with Salon about making “José.”

A romantic drama about a poor, gay Guatemalan teenager seems quite removed from your background. Why did you want to tell this story?

There are many reasons for it. I could spend a whole day talking about why. I wanted to make a film where I had something I wanted to say about society and the situation in the world. We talked to a hundred young, poor, and gay guys in Latin American cities. I felt a lot of pain in their lives. I wanted to speak for them, and many were passionately in love and heartbroken and they suffered from depression and trauma. I wanted them not to feel alone. This is a love story about two men that was forbidden and tender in a rough, violent, and homophobic world.

I wanted to make a Latino classic and something different from “Brokeback Mountain” and “Happy Together,” but just as classic as those two movies. When we started shooting, that was what we were aiming for. If “José” was set in Mexico City or New York City, it would be a coming out struggle for someone middle class. When we traveled in the Latino cities, and saw ethnic groups, Guatemalans are 80 percent dark skin, and the native people are always in supporting roles in life and films. That is unfair for the working-class and poor people. They are modest and I want to tell a story about them.

The film has a tremendous sense of place. Can you talk about immersing viewers in the atmosphere and lives of these characters?

We lived in Guatemala for two years, and every month, before we started organizing cast and crew, we lived in different zones and neighborhoods. We’d take long walks in the city and see many dramatic, cinematic places. The first scene of José walking to work has a bus, metro station and a chicken bus station. It’s a crossroads. There’s prostitution, drug dealers, a market and it’s dangerous at night; it’s a mix of everything. It’s a big transition place. We saw these iconic places and how people are living their lives. They take two hours to go from the slums to get to the city early in the morning to make money. I know more of Guatemala City than my cast and crew! I wanted to create a kind of reality—where and how these characters lived their lives. We wanted to respect the people and their dignity.

The early scenes employ a largely fixed camera that allows viewers to eavesdrop on José. It isn’t until Luis shows up before the camera moves, and when it does, it heightens the emotions. Can you discuss your visual approach to your film?

For the fixed camera, I like the idea — it’s Hsiao-Hsien Hou's idea — that the camera is back and the characters emerge in front of it. There are no sudden cuts or close-ups. Anytime we’d pan or tilt, I was afraid. Why pan? Keep it still. There’s no reason to move the camera. I was careful in creating desire to not interrupt the moment or have the audience be mindful of the movement or editing. I want the audience to participate in feeling the emotions.

There is tremendous emotion, particularly in a scene where José and Luis kiss after sex…

We talked for an hour about that scene! The guys were sweaty and naked and fragile and after the first take, I covered them with a blanket and reset everything. The blanket created a tender moment, so we added that scene where they covered each other and kissed each other. Enrique [Salanic], who is Mayan, said that there are two gay kings in Mayan society, and there’s a famous picture of them hand in hand and posed in the bed, so we covered them, and the guys kissed like these two kings.

There is considerable sex and nudity in the film. What decisions did you make about how explicit the content would be?

For the sex scenes, many gay films are afraid to show a penis, or a complete sex scene. They cut to someone’s face or show a side butt. We need to be honest with gay sex scenes and make them like straight sex scenes. We should see a man’s sex organ like a woman’s. We insisted on this when we prepared with the actors. They were nervous and afraid, but they were bold. For the motorcycle scene, we had the actors sit behind each other, and touch each other. My direction was, “You need to get a hard on. Be intimate with each other,” so that’s what we prepared.

In the internet era people have sex and that’s it—a one-night stand. I’m fine with that phenomena, but I wanted to use this film to show that sex with love is more attractive, and valuable, and passionate.

Jose is loyal to his mother. Can you talk about the mother/son relationship in the film in particular and Latin culture in general?

The mother/son relationship is very interesting to me. I’m Chinese and I spent 20 years in China and 20 years in the U.S. Latino cultures are similar to Asian culture and how mothers are very controlling of their sons and in extreme ways. The mother in “José” is not a villain, she’s realistic. In Guatemala, there are many single mother families. [Well over half] of women are unmarried mothers. So, this kind of mom suffers her whole life. They are poor, separated, or unmarried. It’s a difficult life. For José’s mom, she wanted to hold on to her youngest son [José]. If she let go of him, he could get into drugs or a gang, so she keeps eye on him. I don’t want her to be extreme, or hysterical like Xavier Dolan’s mother in “I Killed My Mother” or as supportive as the mother in “Call Me by Your Name,” who was very middle class and liberal. The actress who played José’s mother is a single mom. . . .  She had a tough life.

What observations do you have about Latino men and machismo?

In Mexico City, the Latino boys and girls are touching each other all the time for hours. They are very passionate. Even boys kiss each other and walking hand in hand in public. They are very bold. To understand machismo, I will tell this story: A guy was riding a motorcycle and some girl said to him “You have two rear view mirrors—that’s not macho! You aren’t afraid of death!” Here’s another thing about machismo—the victim of machismo is often a woman, and she is also the one who raises the machismo. Not to stereotype, but many ladies told us that when they had a family dinner, the boy will get leg of a chicken if they have one, while the girl gets the wings. I have that scene in “José.” It’s not obvious unless you understand the culture.

One striking scene has José fantasizing disrupted by the harsh reality of an earthquake. Can you talk about creating that balance of reality and fantasy?

I wanted to make an epic story, so we had a lot of dream sequences and fantasy sequences and flash forwards and flashbacks but when we went to edit, we wanted to make it short and simple, and that’s what we did. But I thought we can have one dream sequence where José is missing Luis. I wanted to show him having a wet dream about Luis. I thought we could afford to have this one sequence in a hyper-realistic movie. To me, the earthquakes were so frequent in Guatemala that they were a symbol. People feel threatened all the time, the crime rate is high, but when the earthquake is over, everything returns to normal.