Why did it take 10 years for America to leave Michael Jackson's Neverland? 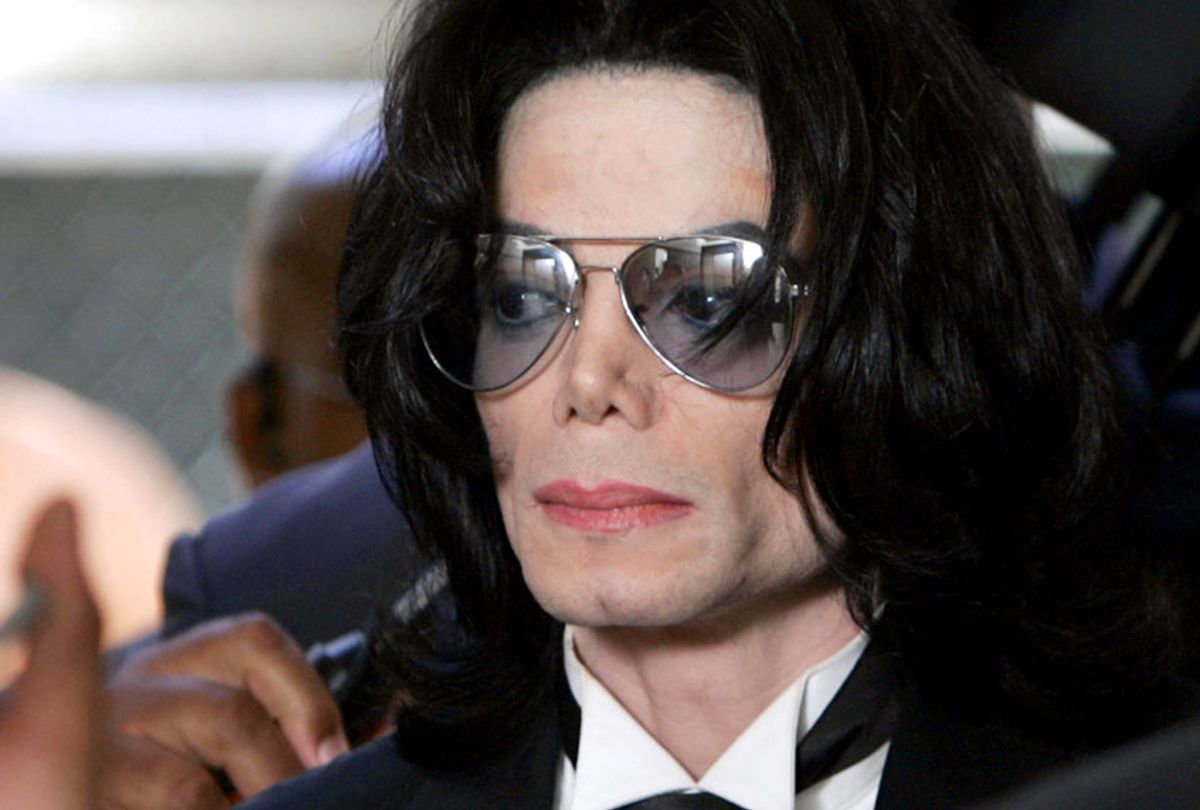 Had enough of Michael Jackson's never-ending afterlife here on earth? I figured I’d had more than enough as soon as it began, with his passing, in 2009. But some 31 million people watched his memorial service then on 19 channels, and Chris Hedges explained why that was scary in a brilliant, scathing column back then.

So, not all of us have had to wait for “Leaving Neverland,” the new HBO documentary, in order to leave Neverland. Not all of us have had to wait for two of Jackson’s alleged victims’ wrenching, new testimony that he abused them as young boys for us to have insisted, a decade ago, that Jackson was accelerating American commercial culture’s abuse of millions of people’s dignity and, yes, that millions were seduced into abusing themselves and others. Wesley Morris’ powerful review/essay on “Leaving Neverland” in the March 3 New York Times is as valuable as the documentary itself, and both are more than a decade overdue.

Consider what Hedges wrote in 2009:

"In celebrity culture we destroy what we worship. The commercial exploitation of Michael Jackson's death was orchestrated by the corporate forces that rendered Jackson insane. . . .  He became a commodity, a product, one to be sold, used and manipulated. He was infected by the moral nihilism and personal disintegration that are at the core of our corporate culture. . . He was a reflection of us in the extreme."

Hedges then damned the corporate minions among us:

"Those who created Jackson's public persona and turned him into a piece of property, first as a child and finally as a corpse encased in a $15,000 gold-plated casket, are the agents, publicists, marketing people, promoters, script writers, television and movie producers, advertisers, video technicians, photographers, bodyguards, recording executives, wardrobe consultants, fitness trainers, pollsters, public announcers and television news personalities who create the vast stage of celebrity for profit. They are the puppet masters."

Hedges visited his preacherly wrath upon us spectators:

"We measure our lives by these celebrities. . . . We escape the messiness of real life through the fantasy of their stardom. . . . We try to see ourselves moving through our lives as a camera would see us, mindful of how we hold ourselves, how we dress, what we say. We invent movies that play inside our heads with us as stars. . . . Neal Gabler, who has written wisely about this, argues that celebrity culture is not a convergence of consumer culture and religion so much as a hostile takeover of religion by consumer culture."

Yet for all its passion, Hedges’ denunciation seemed to come from a Jeremiah without a God or any actual community of believers. He was preaching mainly to casual website visitors — as I, too, am doing right here. Partly that’s because most corporate media wouldn’t have carried Hedges’ denunciation of everything it gropes us for. But with tens of millions of us worshiping false gods, it'll take something more than impassioned anti-capitalism to save us.

I sympathize with Hedges' predicament. He grew up in Maine and rural upstate New York, where his father was a Presbyterian minister in a tough, Calvinist, working-class, New England Yankee culture with which I have a somewhat intimate if testy acquaintance; I grew up six miles north of the spot in Enfield, CT, where the Puritan theologian Jonathan Edwards preached "Sinners in the Hands of an Angry God" in 1741, and some of my own Yankee schoolmarms seemed to me to have been writhing in the congregation when he preached it. They looked not just at us students; they looked into us, morally, in ways that a nine-year-old doesn’t forget.

Small wonder that Hedges, a one-time Harvard Divinity School student himself, erupts at times as Edwards did, in sermons that get under your skin until you're writhing in conviction of sin and are ready to abandon the City of Destruction for stony pathways to redemption. America might have been worse off without such preachments: Calvinist tropes steeled Lincoln in his melancholy determination to assist the divine inexorability of bloody justice. It fired up Harriet Beecher Stowe to write "Uncle Tom's Cabin," the novel that Lincoln told her had "started this great war." It fortified Martin Luther King, Jr. and others to face fire hoses, police dogs and death.

Show me a neocon or a neoliberal who can do that, instead of provoking moral proxies to do it. And yet we’re approaching a time when it will need to be done again. Say what you will about Barack Obama's former pastor, the Rev. Jeremiah Wright, but he understood this. His United Church of Christ and Wright's own first name come straight from the Puritans. Similarly, Hedges calls the Jackson death dance a "spectacle to divert a dying culture from the howling wolf at the gate." Hedges' wolf is the Satan in millions of Americans’ broken hearts and empty hearths.

Wright and King addressed covenanted congregations with an indomitable faith. Lincoln spoke to an America that G.K. Chesterton would call "a nation with the soul of a church.” But Hedges is addressing no community or country waiting to be mobilized like a Church Militant or the Civil Rights Movement. His jeremiad leaves too many in despair and impotent fury.

Depending on how you grew up, you may have a perverse inclination to writhe in self-reproach, at least ritually, like penitential Puritans under the minister's glare or certain liberals and leftists in thrall to those they adopt as guilt-processors — Fanon, Fidel, Foucault or the jihadi du jour. Hedges hands out the hair shirts and whips, but he stops short of naming the Teacher or Savior or Way.

Still, he wants us to rise up and smite the money-changers of finance and corporate capital who are driving and insinuating decadence into our private and public lives. So do I. But our remonstrance seems futile against a people whose false gods include the biblical golden calf of capitalism itself. Our failure to offer a convincing alternative is a serious, dangerous default. People who are stressed and dispossessed may be thrown into despair and rage by great oratory and may become susceptible to the demagogic appeals of corporatist national socialism, national-security-statism, or to fanatical theocrats' calls for their submission.

Angry economism alone can’t offset this. John Maynard Keynes, who outflanked the left's dialectical materialism by spreading capitalist materialism, noted decades ago that the economic opportunity and equality he'd promoted couldn't free the human heart from evil, perhaps especially in prosperity. Vital to freedom though his work had been, he confessed he'd been wrong to think that economic progress would herald "a continuing moral progress by . . . reliable, rational, decent people . . . who can be safely released from the outward restraints of convention and traditional standards and inflexible rules of conduct."

Keynes even concluded that he and his cohort had "completely misunderstood human nature, including our own. It did not occur to us to respect the extraordinary accomplishment of our predecessors in the ordering of life . . . or the elaborate framework which they had devised to protect that order."

He meant the order of Victorians, Calvinists and Hebraists who emphasized conduct, duty and strictness of conscience over romantic and materialist rebellions, dialectical and otherwise. Here in America, the Calvinist theologian Reinhold Niebuhr too warned that liberals and leftists overlooked the "demonic and the primal in man's collective behavior." He added that alongside our depravity is an irrepressible dignity that can make a way out of no way, but only if people have enough spiritual wisdom and discipline to humble original sin, which he defined as the tendency in all individuals to make much more out of their own individual desires and accomplishments than any objective or moral view would justify.

Overcoming that tendency requires a faith stronger than threats of death and than capitalist temptations — deeper and more powerful, that is, than the punishments and blandishments of those powers,  from Fox News to Donald Trump and the predatory promoters of Michael Jackson, that trade day and night on our weaknesses and magnify them.

Who now has a secular-humanist equivalent to that faith that's religiously deep, even if not religious? Might love of the American republic (not the national security state) as a trans-national, civic-republican experiment run that deep? Observing the best of the Civil Rights and Anti-War movements of the 1960s, the German philosopher Jurgen Habermas marveled at the depth of what he called Americans' "constitutional patriotism." In 2008 Obama re-wove that civic faith's Puritan, Hebraic, and humanist strands into a lifeline for the republic, convincing millions of Americans to take "constitutional patriotism" back from the flag lapel pin poseurs and to re-ground it in something vaguely civic-republican.

But lately I’m wondering if young Americans loved Obama's campaign because they mistook it for an extended Michael Jackson performance. It'll take more than a Keynes or even a Jeremiah to tease the truth out of us as we turn now to face our wolves.