No justice for Stephon Clark: Yet another case of police cleared for shooting an unarmed man 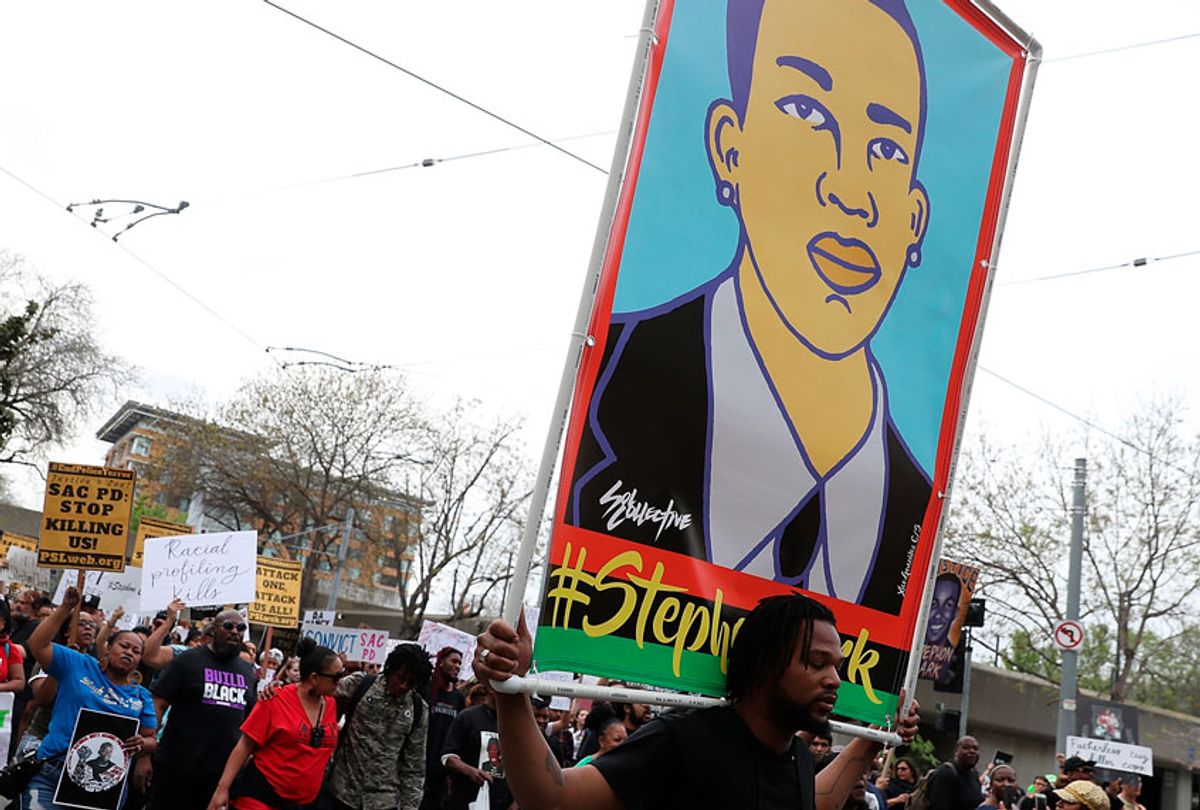 On April 4, 2018, over 100 Black Lives Matter protesters rallied during a day of action outside of the Sacramento district attorney office demanding justice for Stephon Clark, an unarmed black man who was shot and killed by Sacramento police. (Getty/Justin Sullivan)
--

It’s now 2019, and police officers are still getting away with taking the lives of innocent black people. Maybe one of the 2020 progressives vying for the Democratic presidential nomination will address this issue in a real way. This time, it's the police officers responsible for shooting and killing Stephon Clark, a 22-year-old Sacramento man, in his grandmother's backyard last March.

Officers responded to a 911 call of someone breaking car windows. According to ABC News, deputies in a helicopter reported seeing a man with a “toolbar” – and directed the officers there. There’s no report that any such implement was found. Clark did have a cell phone, which police thought was a deadly weapon.

In the aftermath of Clark's death, another familiar pattern emerged. Body camera footage, released three days after the shooting, featured no audio after the shooting, leading to suspicion that the cops may have tried to cover something up. Such a camera shutoff would likely be in violation of department policy: the city has 16 instances in which the camera needs to be activated, and officers do have some discretion to turn the camera off, but there's nothing in the policy about muting the recording. So why was it muted?

Almost a year after Clark was gunned down we still don't have answers about the muted video. On Saturday, Sacramento District Attorney Anne-Marie Schubert finally announced that the two officers who killed him, Terrence Mercadal and Jared Robinet, will not be charged.

"We know Clark fled from the officers after being told to stop, we know that he continued into the backyard, and we know that when he continued into the backyard, he rounded that corner, and he went to the end of that yard and he turned around," said Schubert, justifying the officers' use of deadly force. "He didn't continue to flee. He turned around and he was in a shooting stance with his arms extended."

Instead of focusing on the incompetent cops who killed Clark, and where they went wrong, Schubert took a play out of the racist handbook and placed the victim — Stephon Clark — on trial, pointing out a domestic dispute he had with his girlfriend and his toxicology report, which found evidence of codeine, marijuana, cocaine and Xanax in his system.

“She wants to go on a smear campaign on his character and his actions,” said the victim's mother, Sequette Clark. “That is not a permit to kill him.”

Knowing that the charging of police officers involved in shootings of unarmed people is normally left up to state and local districts would make you think the outcome would lead to mixed results, with some cops charged and some walking. But they are rarely charged; even when indicted, they are not usually found guilty.

According to CNN and Bowling Green State University researcher Philip Stinson, 80 officers have been arrested for off-duty murder or manslaughter between 2005 and April 2017, with only 35 percent convicted, or with cases pending, at the time of the study. The National Police Misconduct Reporting Project analyzed 3,238 criminal cases against officers, on- and off-duty, from 2009-10, and still the conviction rate was only 33 percent, with only 36 percent of those convicted actually serving jail time.

I understand that cops are people with dangerous jobs. But they get it wrong too many times, especially with black people, and are almost never held accountable when they do. They know this, so they are relatively free to act carelessly and be sloppy, leaving families like the Clarks to pick up the pieces while being sold the same BS over and over again.

This is a great opportunity for all of the candidates to address police violence in their campaigns and policy proposals. Voters who live in communities where police officers out-crook the crooks want answers. As I write this, neither Bernie Sanders nor Cory Booker, two Democratic Senators and presidential front-runners, have made any statements about the news on Clark’s shooting. This is completely unacceptable and says a lot about them and their campaign priorities.

After the announcement, California Senator and presidential candidate Kamala Harris — a former state Attorney General — addressed the outcome on Twitter, saying, "Stephon Clark should still be alive. Today's news is a tragic and all too painful reminder that our criminal justice system is deeply flawed and lacks accountability. Our fight for justice continues."

It’s cool that Harris acknowledged the ruling on Clark's killing, but did she say anything new and definitive? Of course it’s tragic. Of course the system is flawed. We know this. Words without action mean nothing. State and local districts have proved time and time again that they don’t know how to handle police violence. It’s time for federal answers. What do the candidates propose to do to hold cops accountable across the country in meaningful ways? When will they step up and start providing real solutions?