Kim Jong Un, or "Little Rocket Man," is not the only dictator or authoritarian Trump has shown an affinity for 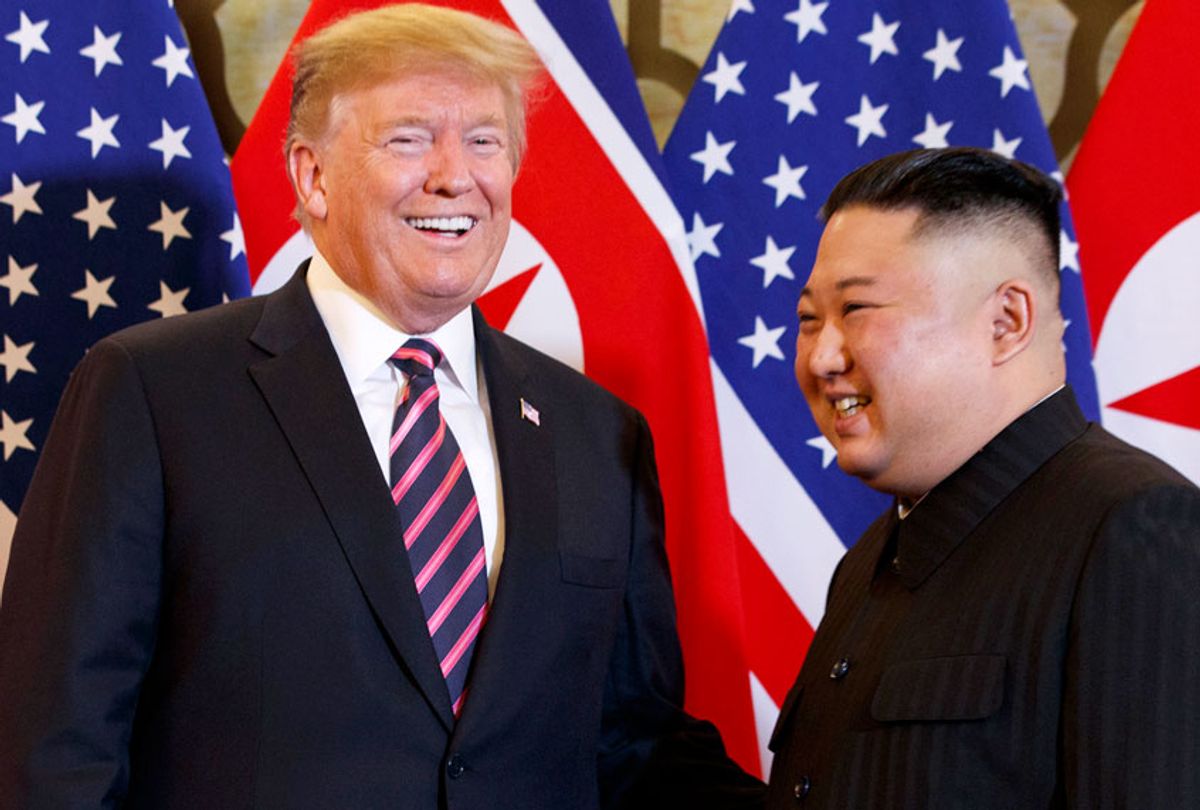 President Donald Trump used to speak disparagingly of Kim Jong Un, repeatedly mocking North Korea’s communist dictator and describing him as “Little Rocket Man.” But when Trump met with Jong Un in Hanoi, Vietnam this week, it was obvious that the contempt he once expressed for the strongman was a thing of the past—and that he has since grown fond of him. On the surface, Trump’s fondness for Jong Un seems odd: Trump considers himself a hyper-capitalist, and Jong Un leads one of the world’s few remaining communist dictatorships. But Trump respects power and strength as much as he despises what he views as weakness, and he sees Jong Un as a symbol of strength.

Trump even defended Jong Un over the death of Otto Warmbier, an American college student who spent 18 months in a North Korean prison (where he was tortured and suffered severe brain damage). Warmbier was imprisoned for allegedly stealing a propaganda poster, and he died after his release. In Hanoi, Trump said that Jong Un, “tells me he didn’t know about (Warmbier), and I’ll take him at his word.” Even former Pennsylvania Sen. Rick Santorum—usually a Trump sycophant—was appalled, telling CNN, “This is reprehensible, what (Trump) just did. He gave cover…. to a leader who knew very well what was going on with Otto Warmbier…. I am disappointed, to say the least, that he did it.”

Brazil’s new far-right president, Jair Bolsonaro, has been described as “the Trump of the Tropics” by South American journalists—and, to be sure, there are some definite parallels between the two. Bolsonaro has a long history of making racist and misogynist comments, and his 2018 campaign had an aggressively nationalist theme. Trump has been an enthusiastic Bolsonaro supporter: on New Year’s Day, Trump tweeted, “Congratulations to President @JairBolsonaro who just made a great inauguration speech – the U.S.A. is with you!”

Bolsonaro is so anti-gay that in a 2011 interview with Playboy, he asserted, “I would not be able to love a gay son. I would rather he die in an accident.” And he has commented that the greatest flaw of Brazil’s military dictatorship of the 1960s and 1970s was that it spent too much time torturing people and not enough time killing people.

CIA Director Gina Haspel has stressed that Saudi agents were likely acting on direct orders from Saudi Crown Prince Mohammed bin Salman, a.k.a. MBS, when they tortured and murdered journalist and Washington Post columnist Jamal Khashoggi inside the Saudi Consulate in Istanbul, Turkey on October 2. Haspel has studied the evidence carefully and listened to an actual recording of Khashoggi’s murder; Salman, however, has maintained that he had nothing to do with the killing—and Trump has chosen to believe him rather than Haspel, stressing that he still considers MBS an important ally of the United States.

Technically, Philippines President Rodrigo Duterte isn’t a dictator: he was democratically elected in 2016. But he is most definitely an authoritarian. According to Human Rights Watch, more than 12,000 people have died as a result of the militarized Philippine War on Drugs. Regardless, Trump has boasted of his “great relationship” with Duterte, praised Duterte’s anti-drug bloodbath and asserted that the U.S. should impose the death penalty on drug dealers.

During much of the 20th Century, Turkey was one of the more liberal countries in the Islamic world and prided itself on being a secular state. But that changed under the leadership of Recep Tayyip Erdogan, who served as prime minister from 2003-2014 and was elected president in 2014 and reelected in 2018. Like Duterte, Erdogan technically isn’t a dictator: he was voted into office and didn’t come to power through a bloody coup. But Erdogan has restricted civil liberties, undermined freedom of the press, jailed countless journalists and weakened the Turkish government’s system of checks and balances.

Despite all that—or perhaps because of it—Trump has expressed his admiration for Erdogan and made it clear that he prefers Turkey over other members of the North Atlantic Treaty Organization (NATO). During a NATO summit in July 2018, Trump was highly critical of Germany and other long-time NATO allies of the U.S. but gave Erdogan a friendly fist bump and said he “does things the right way.”

Russian President Vladimir Putin is another example of a president who, technically, isn’t a dictator and has been voted into office but is clearly an authoritarian. According to Reporters Without Borders, Russia ranks 148th out of 180 countries in terms of press freedom. Regardless, Trump has had much better relations with Putin than his predecessor, President Barack Obama, and after Trump met with Putin in Helsinki, Finland in July 2018, the late Sen. John McCain lambasted him for being so favorable to the Russian president. McCain angrily declared, “President Trump proved not only unable, but unwilling, to stand up to Putin. He and Putin seemed to be speaking from the same script as the president made a conscious choice to defend a tyrant against the fair questions of a free press—and to grant Putin an uncontested platform to spew propaganda and lies to the world.”