“A-plus treatment” for Alabama tornado victims: Trump decides which lives matter — and which do not 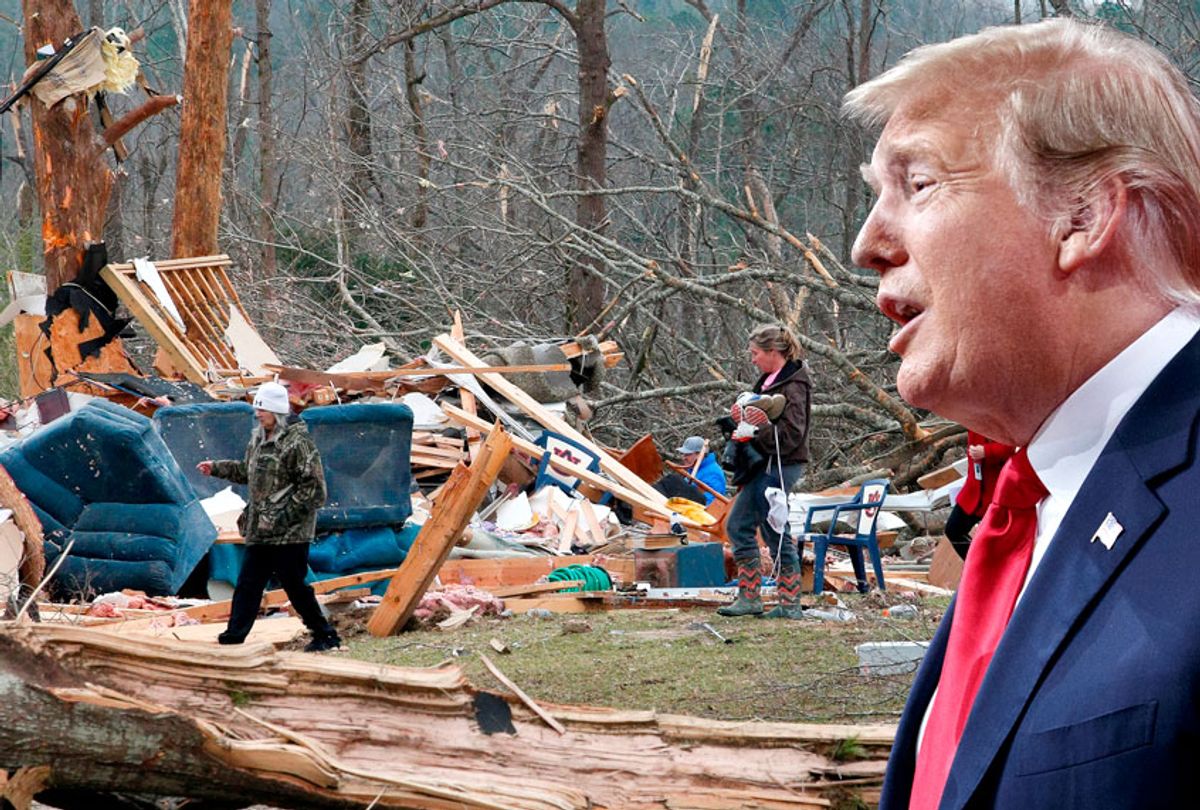 Residents look for belongings March 4, 2019 at a home after it was destroyed in a tornado in Beauregard, Alabama. (AP/Getty/Salon)
--

Correction: An earlier version of this story incorrectly reported that 25 people died in the Camp Fire. The correct death toll stands at 85. The story has been changed to reflect that fact.

How a person responds in times of tragedy and hardship reveals their true character. I’m not talking about made up tragedies like the ludicrous national emergency the president recently declared at the southern border of the U.S., though that too speaks volumes about the president’s character. I’m talking about actual tragedies, like the deadly tornadoes that swept through it Alabama, Georgia and Florida on Sunday killing as many as 23 people. President Trump's response to this tragedy in comparison to his response to other natural disasters such as the California wildfires and Hurricane Maria very much reveals his true values.

On Monday morning, our tweeter-in-chief had this to say on Twitter: “FEMA has been told directly by me to give the A Plus treatment to the Great State of Alabama and the wonderful people who have been so devastated by the Tornadoes. @GovernorKayIvey, one of the best in our Country, has been so informed. She is working closely with FEMA (and me!).”

Let’s begin with what’s absent from the president’s tweet: any expression of sympathy and sorrow for the families of those who have lost loved ones.

The president instead goes right to work making this tragedy all about himself, bragging that he has instructed FEMA to give Alabama “A Plus treatment” and literally exclaiming (notice the exclamation point) that Governor Kay Ivey is “working closely with FEMA (and me!).” This A Plus narcissist apparently never gets tired of making everything about himself.

Still, while singing his own praise, Trump does manage to give a shout out both to the state of Alabama and its Republican governor. Trump, of course, likes states that voted for him during the 2016 election and he won the state of Alabama with 62.1 percent of the vote.

California, by contrast, was won by Hillary Clinton with an equally impressive 61.7 percent of the vote. So, it really wasn't a surprise that when that state was devastated by wildfires in November 2018 that the president tweeted: “There is no reason for these massive, deadly and costly forest fires in California except that forest management is so poor. Billions of dollars are given each year, with so many lives lost, all because of gross mismanagement of the forests. Remedy now, or no more Fed payments!”

It is difficult not to notice how Trump blames the state of California for the tragedy that befell it and then complains about how much it’s going to cost. The Camp Fire in Northern California killed 85 people, but the president makes no reference to the tragic loss of human life.

Trump’s response to the tornadoes in Alabama is also remarkably different than his now infamous response to Hurricane Maria in Puerto Rico. While Puerto Ricans are American citizens, they don’t actually vote in presidential elections. Not surprisingly, Trump's administration was slow to respond to the crisis on the island.

Worse still, as the scope of the tragedy in Puerto Rico later became clear, the president actually contested how serious the tragedy was:

It is unconscionable that a president would argue over the number of deaths in Puerto Rico and then blame Democrats for inflating those numbers. We have long understood that the president is a callous narcissist. But the juxtaposition of his response to the tragedy in Alabama and the tragedies in California and Puerto Rico suggest that not all lives matter equally to him. And, so, we are left with the realization that the president’s rhetorical response to human tragedy is tragically inhumane.

This is typical of how the president consistently treats people in his rhetoric. Those that support him are worthy of his support; they are true Americans. Those who don’t support him aren’t really people at all, and they’re certainly not Americans.

Brian L. Ott is Professor of Communication Studies and Director of the TTU Press at Texas Tech University. He is an award-winning scholar, who has spent more than 20 years studying rhetoric, media, and their intersection. His latest book, co-authored with Greg Dickinson, is "The Twitter Presidency: Donald J. Trump and the Politics of White Rage."