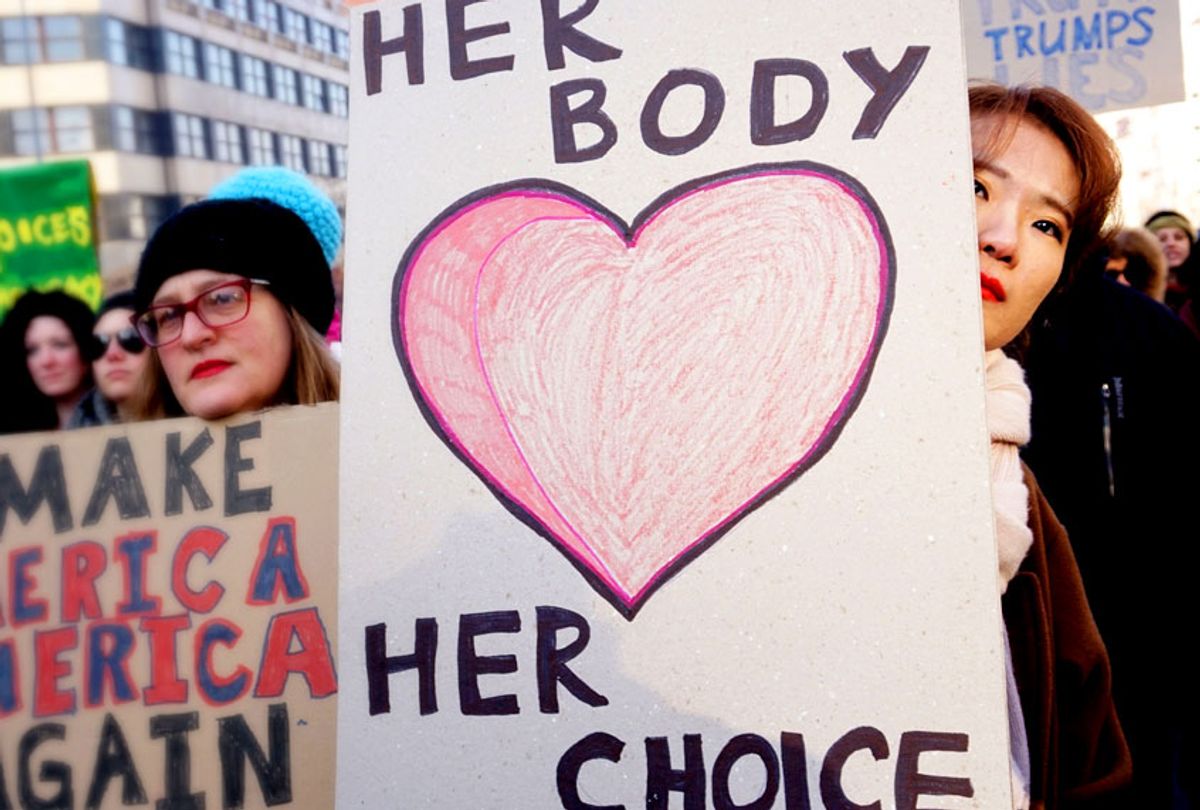 It was always about putting women's bodies under male control.

In November, voters in Alabama passed a law granting fertilized eggs "personhood" status, effectively elevating the "rights" of embryonic potential human beings over actual living women. The law couldn't end abortion rights altogether, since Roe v. Wade, the 1973 Supreme Court decision that guarantees abortion rights, still stands for the moment. But anti-choice activists in the state got to work immediately looking for other ways to exploit this law in order to gut women's rights.

And one of the first moves they made — perhaps the first one — was to seek to give men ownership rights over women's bodies. In February, a group called Personhood Alabama — which appears, from tax filings and URL registration, to have been launched this year — filed suit against the Alabama Women’s Center and the pharmaceutical company that makes abortion pills on behalf of a man named Ryan Magers. He is angry that the abortion clinic granted an unnamed "girlfriend" an abortion over his wishes.

This week, under Alabama's new personhood law, the court declared that Magers had a right to sue.

Magers' argument is simple: He wanted his girlfriend to have the baby. She didn't. He believes that men have a right to force childbirth on women they've laid claim to.

"I'm here for the men who actually want to have their baby," Magers told the press when he filed suit.

This is for "other fathers, other future fathers," he added when the court granted him the right to sue. This essentially makes clear that the goal here is to force clinics, under fear of lawsuit, only to grant abortions to women who have the permission of their male sexual partners.

Magers would "have been the father of a child, and he was doing everything within his power to have that come about," said his attorney, Brent Helms, but "unfortunately because he has no say ... he’s left without a child."

It's flatly untrue that Magers had no say, even by his own account. On the contrary, he has told the press that he made his wishes known to his girlfriend at great length.

Since persuasion didn't work, Magers and his supporters clearly believe that greater force is justified.

It shouldn't be surprising that the religious right's move, straight out of the gate, is to use this new personhood law to force women into unwanted relationships with controlling men. Despite protestations to the contrary, the anti-abortion movement has never been about "life" or "sexual morality" or "family." It's about taking away women's freedom and putting them under men's control. The fact that unwanted childbirth traps women in bad relationships or makes it harder for them to succeed at work or school isn't a side effect of anti-choice activism — it's the goal.

This is part of the reason why the religious right has been so fiercely supportive of Donald Trump, a thrice-married adulterer who has paid off at least two women in the sex industry to keep silent about their (alleged) affairs. Trump may not perform the public sanctimony of Vice President Mike Pence, but what he shares with the religious right is a deep contempt for women and a belief in male dominance.

Trump was caught bragging on tape, infamously, that he likes to "grab them by the pussy." In state legislatures and courts across the country, the religious right is trying to change the law to accomplish the same goal.

Last month, the evangelical Christian world was rocked by a series of reports in the Houston Chronicle and San Antonio Express-News on widespread sexual abuse and resulting cover-ups within the Southern Baptist Convention.  The scandal was reminiscent of the one that's been tearing up the Roman Catholic Church around the world for more than a decade: Hundreds of men over many years taking advantage of their roles as church leaders to sexually abuse congregants. In at least 35 cases, the offenders were rehired by other churches. In the past, activists have asked church leadership to do something to stop this, but were rebuffed.

Salon reported on a similar history within evangelical universities last June. Schools have been accused of covering for sexual harassment and even rape. While these kinds of abuses happen in secular organizations as well, these reports suggest that the religious adherence to traditional gender norms can often make the situation worse, with more efforts to make excuses for male misbehavior and shift blame onto victims.

For all the posturing that conservative religious leaders do about sexual morality, the evidence shows that their true ideology is simply male domination. As much as some would wish otherwise, there's simply no way to separate anti-abortion ideology from a culture of protecting sexual abusers and shunning their victims. Both are rooted in a view of male entitlement to women's bodies, and a loathing of women who try to claim freedom and autonomy for themselves.

It's telling that the same anti-abortion press that routinely holds forth on the supposed evils of fornication did not utter a word of judgment against Magers for having premarital sex or offer any hint that if he wants to be a father so badly, maybe he should find someone who wants to marry him first.

This is in line with the larger approach taken by anti-choice websites when dealing with the issue of men and abortion. Religious right literature routinely warns women that premarital sex can lead to abandonment and heartbreak. But for men who have sex with a woman who decides to reject a pregnancy and usually a relationship, there is no warning about the wages of sin, only anger that women have the right to say no.

There's good reason to believe that Magers won't get far with his lawsuit, but that the court is even letting it go forward at all is troubling. The Supreme Court has one judge already who is on the record as believing that women should be forced to notify their husbands of an abortion. The court has already ruled in favor of a suit arguing that a woman's boss should be able to manipulate insurance coverage to veto her birth control preferences. Brick by brick, the religious right and its allies in the judicial branch are building the case that a woman's uterus belongs not to her, but to her husband, her boss or her boyfriend. This is just another move in that direction.