"After Neverland," R. Kelly's CBS meltdown, and the insidious patterns we refuse to see 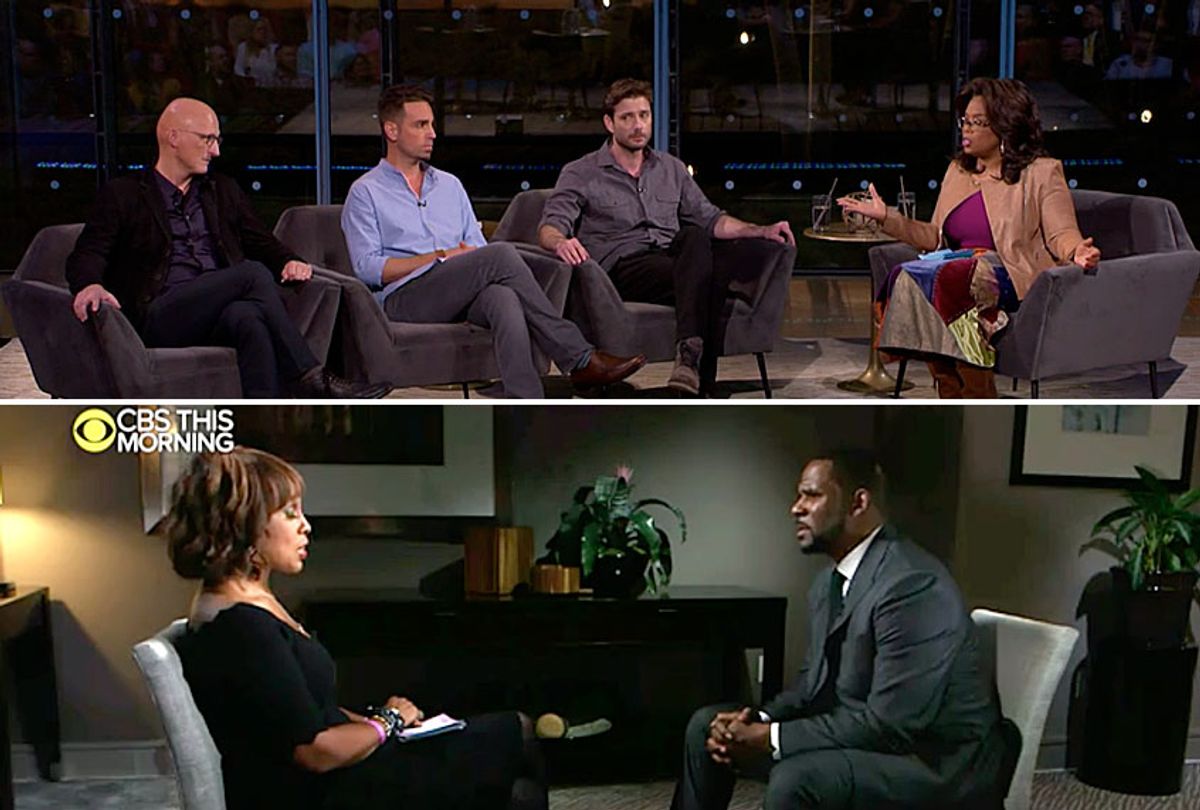 “Celebrity supersedes criminality,” Dowd writes, and when Oprah repeats those words before an audience composed primarily of rape and sexual abuse survivors, a hushed “ooh” ripples the air in Manhattan’s Times Center auditorium. Oprah nods knowingly. “Mmm-hmm. If you love that line,” she adds, “You’ll love this one: 'How can you see clearly when you’re looking into the sun? How can an icon be a con?’”

Some may be asking themselves that very same question with regard to R. Kelly, in spite of the pile of testimony against him, much of it provided in the court of public opinion by way of Lifetime's docuseries "Surviving R. Kelly." On Wednesday Kelly’s unhinged explosion during an interview with Gayle King aired on “CBS This Morning,” revealing a man so out of touch with public perception and so in denial about his alleged behavior that one had to wonder what possessed him to go on national TV in the first place. (Then again, see: Jussie Smollett. Seems that yet-to-be-named "itis" going around these days.)

King interviewed Kelly at his home in Chicago’s Trump Tower — where else could he live but Trump Tower? — where, at the time, he was free on bond and awaiting trial on 10 charges of aggravated criminal sexual abuse involving four victims, three of whom were minors at the time they allege that they had sex with him.  Hours after the interview first aired Kelly was taken into police custody due to a failure to pay more than $161,000 in child support.

King's cool comportment during the interview has earned her high praise among her peers.  As Kelly leaps out of his chair in a rage gesticulating wildly and cursing, King stares straight ahead throughout her subject’s tirade, unfazed and barely blinking.

Not once does she raise her voice. “Robert,” King says evenly as he stabs the air above her with his forefinger, “we have to have a conversation. I don’t want you just ranting at the camera.”

Rant he does, to the point that King and the production team pause for a moment while Kelly’s publicist calms him down. When he finally settles back into his seat, he declares, “I need help.”

“What kind of help?” King asks, to which Kelly responds, “This is the kind of help I need…I need somebody to help me not have a big heart.”

This is the stuff that makes late night hosts and the writing staffs of those series, along with “Saturday Night Live,” sharpen their verbal harpoons. But returning to Dowd’s quote, the lesson here is not to be blinded by the light but to see, with sharp-edged clarity, what we can learn about our culture’s relationship with and understanding of abuse.

Winfrey’s “After Neverland” debuted on HBO and OWN after part two of Dan Reed’s documentary aired, and her special has been in the works at least since the end of February. There was no way to know back then that Oprah's best friend would air an interview with another famous alleged abuser of minors within a day or two of "After Neverland"'s debut. But it's a good thing that they are on the airwaves in close proximity: they are coincidental companion pieces, educating the audience about the rolling effects of abuse and the common traits of abusers.

The crossover is obvious with regard to subject matter, although Oprah cogently opines that the word "abuse" lacks accuracy and is confusing. She points out that survivors such as Wade Robson and James Safechuck, the central subjects of “Leaving Neverland,” didn’t realize they’d been abused until much later in life, which is typical of many survivors.  Whether Kelly's live-in girlfriends Azriel Clary and Joycelyn Savage will say the same one day is unknown. On Thursday CBS aired their interview with King, in which they defended the singer and accused their parents of trying to extort the star, with Clary going as far as to claim her parents encouraged her to take sexual videos with him to blackmail him.

Clary's and Savage's parents appear in "Surviving R. Kelly," which shows their attempts to extricate their daughters from the singer's orbit. Their families describe them as "brainwashed." To King, Kelly claims that Clary and Savage handed their daughters over to them: "What kind of father, what kind of mother, would sell they daughter to a man? How come it was it OK for me to see them until they wasn't getting no money for it?" (After Wednesday's interview aired, however, Savage connected with her family in a phone call after having been out of contact since 2017.)

In "After Neverland," Robson uses the term “training” to describe how Jackson allegedly molded their psyches. From night one, Robson says, Jackson told him he loved him, and what he was doing was an act of love, and that God brought them together. He was around seven years old at the time he alleges the abuse began. Jackson would have been 31. Robson observes that through this and subsequent encounters over the years, he was trained to protect Jackson.

Robson also observes of Jackson, “the grooming had started long before we ever met him, you know? Because he was who he was. He was such a massive figure who represented himself as an angel." Robson adds, "long before ever meeting him the first time, so much had been set up already that I was, and I think my mother, my whole family, was already surrendered before I met him.”

“After Neverland,” Oprah explains, was conceived of after she saw Dan Reed’s documentary and realized he demonstrated in four hours what she says she could not do in the 25 years of “The Oprah Winfrey Show,” over the course of which she taped 217 episodes on sexual abuse. “I tried and tried and tried to get the message across to people that sexual abuse was not just abuse,” Oprah explains. “It was also sexual seduction.”

She goes on to explain that seduction doesn’t merely refer to the victims themselves but, in Jackson’s case, their families. “The reason the idea of Michael Jackson or any major person committing sexual abuse against children challenges so many people is because in every family you have to face that some things are not the way they appear to be,” Oprah observes. “And what people have to accept in their own families is that people can do good things, they can be loving and helpful, and also be an abuser and a person who does bad things. Both can be true.”

Jackson is not family, although to millions of people who have profoundly integrated their love for his music into their lives, he might as well be. The same can be said (albeit on a much smaller scale) of Kelly, whose reputation for seducing underage girls and allegedly keeping women as sex slaves received a deep exploration in “Surviving R. Kelly.”

Kelly is known to the mainstream population as the creator of the inspirational single “I Believe I Can Fly,” but R&B fans also know him as the man behind such sexually suggestive hits as “Ignition” and “Bump n’ Grind.” Never has Kelly been expressly associated with innocence by a wider audience; in fact, unlike Jackson, I’d wager that before he was acquitted on child pornography charges in 2008, most pop music consumers didn’t think much about him at all. Afterward the case became comedic fodder for the likes of Dave Chappelle and the cartoon series "The Boondocks." Never mind that the case concerned a film allegedly featuring Kelly having sex with a girl who may have been as young as 13 at the time.

But if we have Kelly on the brain now, it’s because of the multiple claims of illegality have been dragged into the light so many times over the years that it became impossible for authorities to refrain from taking action. Kelly did not participate in “Surviving R. Kelly,” which is just as well. Like “Leaving Neverland,” that series was a means of giving his victims, including his ex-wife Andrea Kelly, a voice.

King’s CBS News interview, on the other hand, shows America classic abusive behavior acted out by a star. Kelly claims that the more than 50 people in the Lifetime series, including a former tour manager who confirms he enabled Kelly's controlling behavior, are "lying on him."  He yells, histrionically weeps and accuses the public and his former spouse of engaging  in character assassination. Answering King’s query about his reputation for preferring young girls, Kelly says, “I don’t look at ‘much younger than me…I just look at ‘legal.’”

He speaks to the camera, and to men specifically using “guys” and “man” as he rails at Americans who believe the allegations against him.

“That’s stupid, guys!  Is this camera on me?” he asks King, who replies, somewhat exhaustedly before he takes off, “Yes, it’s on.”

He follows his tearful declaration about having too big of a heart with, “My heart is so big, people betray me and —” he punches his palm for emphasis “— I keep forgiving them.”

A number of people cited also noticed these traits last fall during another significant news event, Brett Kavanaugh's high-strung, tearful response to Christine Blasey Ford’s testimony before the Senate Judiciary Committee, answering her detailed account of her claim that he attempted to rape her the 1980s, when they were both in high school, with spite-filled rage and tears at his reputation being forever besmirched.

He was confirmed to the Supreme Court nevertheless, because those inclined to believe Kavanaugh (i.e. those with a vested interest in what he can do to support their political position) framed his aggressive behavior as passionate defense and a natural result of frustration.

Kelly's sphere of influence is minuscule in comparison, although he was once reportedly well-connected in the music community and, according to the docuseries about him, within local police departments. That level of pull doesn't come close to the power afforded to a well-connected white Yale graduate who has steadily ascended in national politics. At any rate, even that appears to be amply diminished.

But people who have some experience with abuse and abusers of any strain, whether physical, verbal, psychological, sexual — each adopts plays from the same book — may have recognized a few classic tactics in Kelly's eruptive display.

Wouldn’t it be interesting for CBS to call this out during the prime-time special devoted to Kelly’s case , scheduled to air Friday at 8 p.m. on the network? According to a CBS's release about the special, it will include as-yet un-aired portions of King’s 80-minute interview with Kelly, adding "CBS News journalists will explore the allegations of abuse against Kelly, his denials and more." It could provide one of those teachable moments that Oprah strives to pass along.

Alas, there remains that matter of the blinding sun. Many are still dazzled by Kelly despite the legal weight pressing down on him. The reason King was able to interview Kelly in his home this week is because on Monday a 47-year-old  woman posted the $100,0000 bond for the 52-year-old singer, identifying herself on the record as “a friend.”

The meme-ability of Kelly’s eruption has already taken hold of social media, inevitably lampooning his showing-out for its entertainment value as opposed to examining it as a symptom of what Oprah refers to in “After Neverland” as “this insidious pattern that’s happening in our culture that we refuse to look at.” Millions are bound to be drawn to CBS' coverage of Kelly's evolving reckoning. But for a number of reasons, it's highly doubtful that the larger audience will at last agree on what it is that we should be seeing.