Republicans freak out over HR1: They don't want America to have fair elections

Conservatives are in panic mode over HR1, the House bill that would make it easier for all Americans to vote 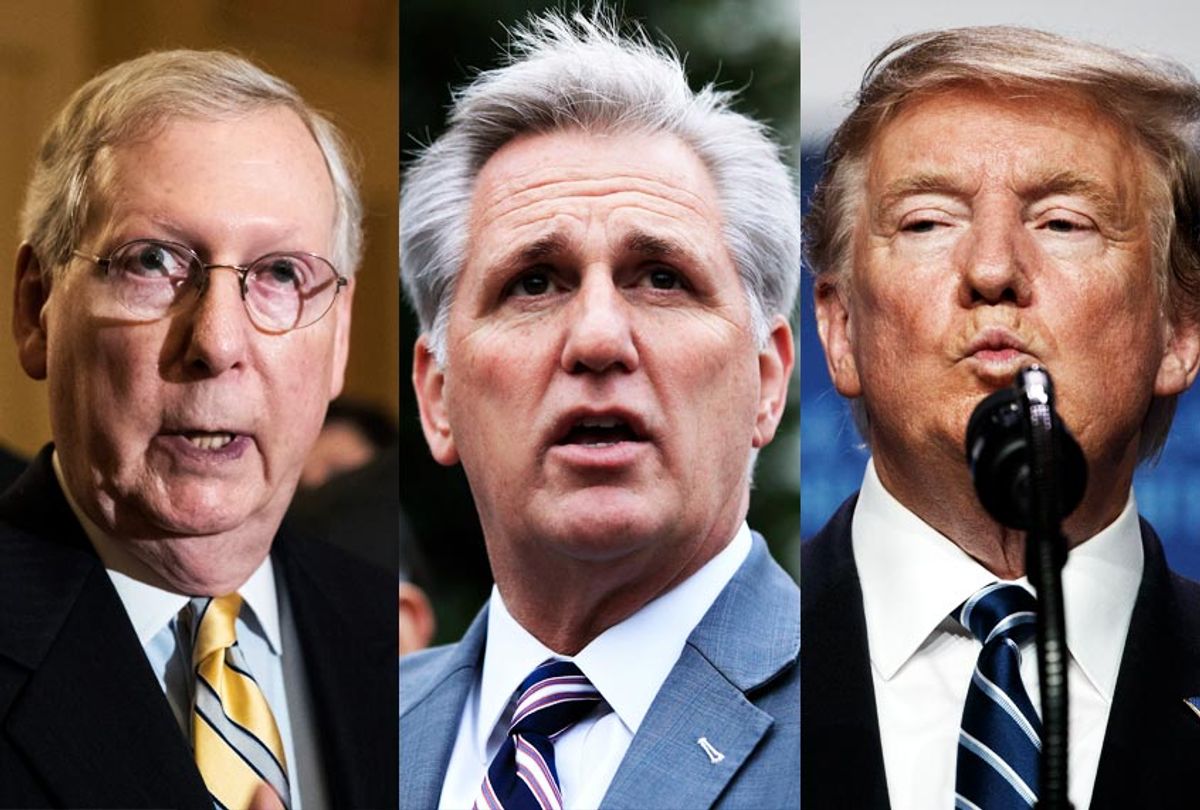 On Friday, the Democratic majority in the House of Representatives passed a hefty, but badly needed, omnibus bill aimed at restoring American democracy after the beating it's taken lately from big money and authoritarian interests. HR1, also called the "For the People Act," has a series of provisions aimed at protecting the right to vote, muting the impact of big money spending on politics and strengthening ethics requirements for political candidates.

This bill's aims are broadly popular with Americans. Its provisions to make voter registration essentially automatic -- you can opt out, but you won't have to opt in -- are supported by 65 percent of Americans. Provisions to make voting easier enjoy similarly high levels of support. Campaign finance reform is also wildly popular, with healthy majorities supporting it. And when it comes to the power of lobbyists, well, they come last in polls where Americans ranks professions by ethical standards.

But while the public very much likes the provisions in this bill, Republican politicians and conservative activists very much don't. The reason is simple: Conservatives know they're not likely to win a fair fight, and so they want a system that makes it easy for them to cheat.

Senate Majority Leader Mitch McConnell has been aggressively demonizing this bill, characterizing it as a "radical, half-baked socialist proposal" -- which is peculiar, since it doesn't address economic issues at all -- and "a political power grab".

“One senator said this is a power grab," said Rep. Zoe Lofgren, D,-Calif, in a Friday morning press conference, without mentioning the majority leader's name. "Yes it is. It’s a power grab for the American people.”

"Leader McConnell, we’re proud we want more people to vote. Why are you ashamed of it? Why do you run away from it," asked Minority Leader Chuck Schumer on the Senate floor, taunting his Republican opponent.

Not only is McConnell refusing to bring the bill up for a vote in the Senate, he is reportedly waging an all-out campaign to intimidate any Republican senators out of backing it in public.

McConnell is supported in these efforts by a wide array of conservative groups, who are eagerly spreading misinformation about what's actually in the bill in their efforts to kill it. The Conservative Action Project released a letter signed by dozens of right-wing leaders and organizations that misleadingly characterizes the bill as an attack on the First Amendment and "individual voter integrity."

This complaint depends heavily on distortions and deceptive scare tactics. The letter claims, for instance, that the bill would "allow the Federal Election Commission to track and catalogue more of what Americans are saying." In fact, what would be tracked is not speech but spending — who gives money to support which candidates. The letter further complains that HR1 "reasserts the ability of the federal government to micromanage state elections," while failing to acknowledge why the feds have to step in, which is because certain states continue to enact Jim Crow-style laws designed to keep black people from voting.

The letter's signatories fully capture the breadth of right-wing interest in keeping Americans from voting and keeping dark money spending in politics. There are the groups that explicitly exist to serve the interests of the wealthy against everyone else, such as Americans for Tax Reform and Citizens United, working to preserve the "rights" of rich people to anonymously dump large sums of money into elections in hopes of buying themselves lower taxes. But the list also include a large number of religious right luminaries, such as the anti-abortion group SBA List and the James Dobson Family Institute.

It shouldn't be a big surprise that activists from every corner of the conservative world oppose fair and free elections: Their agendas are widely and increasingly unpopular, and they cannot win without cheating.

With Americans suffering under soaring wealth inequality, it's no wonder that groups that represent the interests of the hyper-rich would be afraid of fair elections. But that's equally true when it comes to the religious right agenda. Seven out of 10 Americans want to preserve the abortion rights guaranteed by Roe v. Wade, and nearly as many support same-sex marriage. The only way for conservatives to win is to keep as many Americans away from the polls as possible.

This over-the-top hostility to HR1 is even more striking in light of what the bill doesn't do to curtail the significant and unfair advantages Republicans enjoy in the American electoral system. HR1 does nothing to change the fact that rural and suburban areas are disproportionately represented both in Congress and in the presidential election. It does nothing to address the way that Fox News, which is a propaganda outlet rather than a legitimate news organization, has become the dominant source of information for millions of voters.

The bill doesn't even limit the amount of money that rich people can spend on elections. It just makes it harder to spend that money anonymously, and kicks some money over to small dollar donors so they can compete on a more even playing field.

It says a lot about how unpopular the Republican agenda is — and how clearly Republican activists and politicians understand this — that they're in full-blown panic mode at the idea of having even a fraction of their unfair advantages taken away. Apparently it's not enough to have an entire TV network blanketing the nation with right-wing propaganda, a billionaire class willing to spend ungodly amounts of money on misleading ads supporting Republican candidates, and an electoral system set up so that even when Democrats get millions more votes, Republicans win anyway. No, Republicans clearly believe they also need anonymous spending, voter suppression and toothless election laws in order to keep on winning.

Republicans don't just believe they have to cheat; they believe they have to cheat a lot. They're probably right about that. Without the two-ton thumb on the scale in favor of Republicans, they wouldn't, in their current form, win anything much except regional elections in the Deep South and some parts of the Midwest. Rather than moderate or adjust their views to win elections in a rapidly changing America, they have embraced a darker agenda: trying to crush fair and free democratic elections.