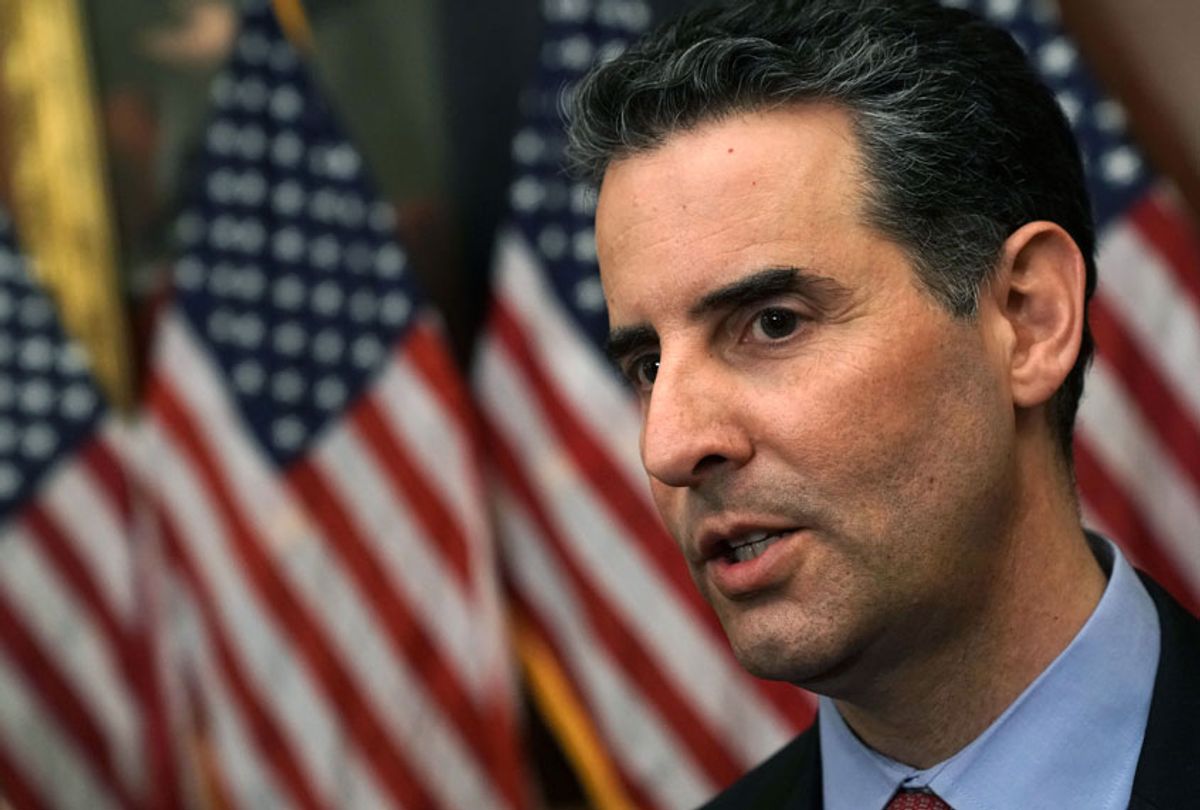 Rep. John Sarbanes (D-MD) speaks to members of the media after a news conference held to introduce H.R.1, the 'For the People Act, at the U.S. Capitol January 4, 2019. (Getty/Alex Wong)
--

President Trump's government shutdown, as he admitted to congressional leaders on Wednesday, is all about preserving his ego and refusing to admit the border wall was always a ridiculous, racist fantasy. But forcing a shutdown serves Trump's ego in other ways as Democrats take charge of the House of Representatives this week. Inducing a national emergency for no good reason allows Trump to control both the media narrative and, to a degree, the agenda of the brand new Congress, by forcing Democrats to take time out to deal with this shutdown crisis instead of moving onto their planned agenda items.

On Friday, Democratic leaders indicated that they would not let Trump simply rip up their existing timetable, but instead would plow forward with plans that have been in effect for months. They're kicking off the 116th legislative session with a "good government" agenda aimed at protecting and expanding voting rights, as well as reducing corruption and corporate influence in politics.

On Thursday, House Democrats unveiled their first piece of legislation this session, an ambitious bill that would take major steps toward rolling back Republican assaults on our democratic systems.

“We heard loud and clear from the American people that they feel left out and locked out too often from their own democracy, that they want us to fight the culture of corruption, they want us to clean up Washington, fix the system and give them their voice back," Rep. John Sarbanes of Maryland, who spearheaded the legislation, declared during a Friday press conference unveiling the bill.

The bill, called the "For the People Act" and now designated as HR1, is divided into three buckets: Ensuring voting rights, pushing big money interests out of politics and strengthening ethics regulations on politicians.

These kinds of "good government" policies,  while voters tend to support them in public polls, have a history of not really firing up the public as election issues. That may have changed in the Trump years, and not just because his extensive personal and political corruption dominates the headlines on a regular basis. The somewhat dry issue of voting rights has become more prominent in both media coverage and in the minds of voters over the past year.

The 2018 election was dominated by a series of horror stories about how badly broken our voting systems are. As a result, the public is becoming more aware that such brokenness is not accidental. Indeed it's by design, the result of a series of choices made by Republican leaders who actively fight to keep young voters, people of color and people in urban areas — who all overwhelmingly tend to vote for Democrats — as far from the polls as they can.

The most prominent example was seen Georgia, where Democrat Stacey Abrams quite likely lost the gubernatorial election to Republican Brian Kemp due to Republican cheating. Kemp -- who ran the state election system as Georgia's secretary of state while he was running for office -- and his allies pulled every trick in the book to suppress voter turnout: Using red tape to slow down voter registrations, intimidating people who tried to show up at the polls, labeling naturalized citizens as "non-citizens" and suspending tens of thousands of legitimate voter registrations for disingenuous reasons. The list goes on.

Georgia's problems stood out the most, but horror stories poured in from all over the country, particularly in Texas, North Dakota and Florida.

“I truly believe, deep in my heart, in my soul, the way votes were not counted and purged in Georgia, in Florida, in other states, changed the outcome of the last election," Rep. John Lewis of Georgia said. "That must never happen again in our country.”

This new bill lays out a series of robust policy responses that would go a long way to counteract these voter suppression efforts, and short-circuit many of them. It's not just that HR1 would effectively ban some of the more outrageous voter suppression tactics. It would also require states to have two weeks of early voting, to use paper ballots, and offer same-day registration to voters.

Perhaps most ambitious is the bill's provision requiring states to automatically register voters.

"Automatic voter registration creates an 'opt-out' instead of 'opt-in' voting system," Rep. Marc Veasey, D-Texas, told Salon. "All eligible citizens of voting age who interact with government agencies will be registered to vote, or have their existing registration information updated, unless they affirmatively decline."

Veasey estimates that this move could add two million voters to the rolls in Texas, a state where Democrat Beto O'Rourke, only lost to Republican Sen. Ted Cruz by 200,000 votes in the November election.

HR1 also includes a series of provisions to hamper the power of corporate lobbyists or slow down the influx of dark money into politics, a major Democratic concern ever since the disastrous  Citizens United decision handed down by the Supreme Court in 2010. Other provisions, however, seem like direct responses to Trump's unprecedented corruption during the campaign and since he took office in 2017. For instance, the bill would force all presidential appointees to recuse themselves from any matter of substantial interest to the president or his children -- clearly a response to Trump's firing spree of Justice Department officials who refused to shut down investigations into his potentially criminal behavior.

This move is the first signal since Thursday's swearing-in ceremony that House Democrats intend to focus heavily on investigating and exposing Trump in 2019. Rep. Elijah Cummings, D-Md., who will chair the House Oversight Committee in the new Congress, made this point explicitly during Friday's press conference.

“Over the last two years, President Trump set the tone, from the top of his administration, that behaving ethically and complying with the law is optional," he said, announcing that with his new oversight powers he will push back aggressively.

Of course, there's little hope that this ambitious bill will get past the Republican-controlled Senate, much less Trump's desk. But it's a useful exercise anyway: Democrats are forcing Republicans to stand against not just the right of all Americans to vote, but against limiting corruption in politics.

Sarbanes has been working this kind of legislation for years. As Trump's unpopularity increases, particularly with the shutdown, odds continue to rise that Democrats can potentially regain control of both houses of Congress and the White House in the 2020 elections. Should that happen, this bill, having already passed the House, will give Democrats an opportunity to reverse years of damage to our democracy wrought by Trump and his party.