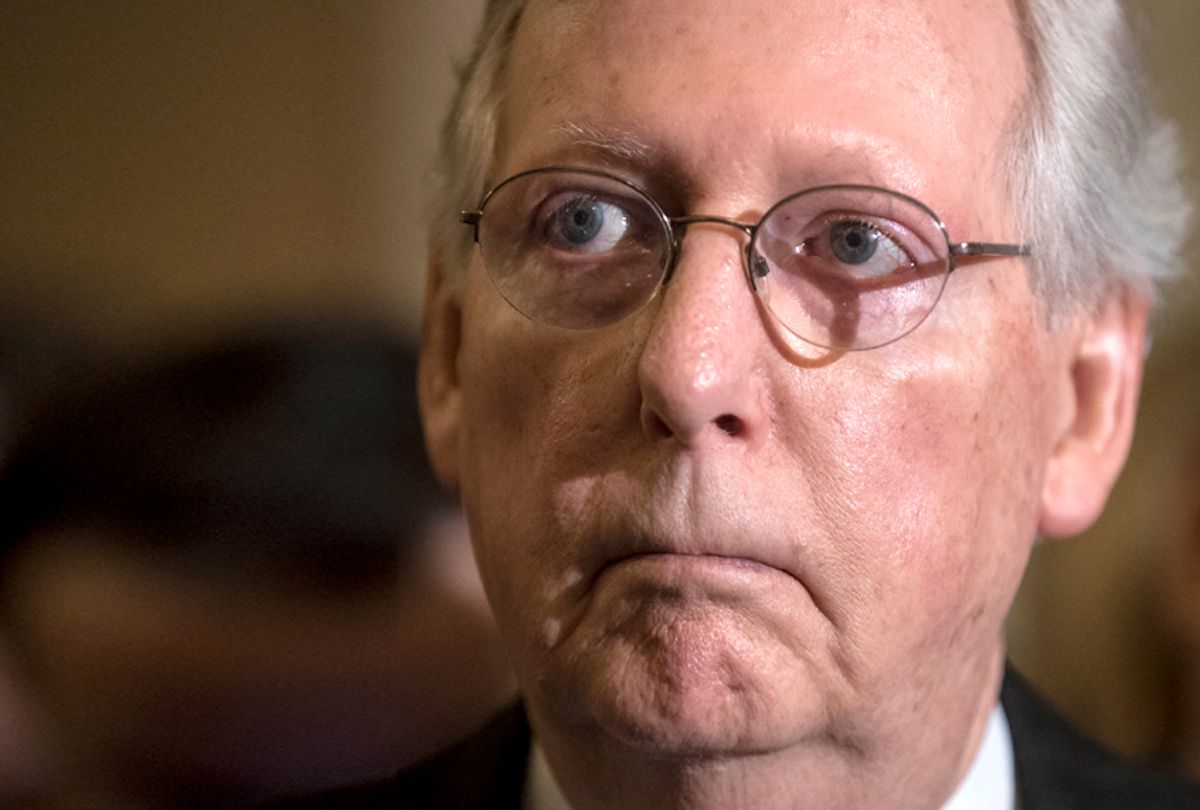 Constitutional treasure hunters, stay on your toes these next few days, because they reveal a giant "X marks the spot" on our collective expedition back to that lost democratic paradise: a Congress that represents the will of the people.

Here's what's happening: The Democratic House passed a bill to prevent President Donald Trump from using his power to declare a national emergency in order to fulfill his campaign promise of constructing a 2,000-mile vanity wall across the southern border, which automatically sent the bill to a vote in the Republican Senate, where it has just garnered the votes to pass. Checks: balanced.

Did you catch the golden distinction right there in the middle? The National Emergencies Act contains a crucial provision: When one Congressional chamber votes to override an emergency declaration, it automatically goes up for a vote in the other chamber. That makes this the rare occasion Senate Majority Leader Mitch McConnell, R-Ky., cannot stand in the way of our representatives voting on a popularly-supported bill by just not scheduling it for a vote.

Let me simplify: If you take away the Senate majority leader's power to schedule or not schedule votes, government works. Open sesame.

Let's back up. In the throes of the longest government shutdown in U.S. history – over funding for the president's campaign promise of a border wall to his base – Rep. Alexandria Ocasio-Cortez, D-N.Y., seemingly spotted the keystone that would topple the wall between us and functioning democracy. "We have secured enough Republican votes in the Senate to reopen the government," she wrote. "Our obstacle now is Mitch McConnell, who won't call the vote."

McConnell was using his power to determine the schedule of votes to singlehandedly veto any popularly-supported legislation that would have reopened the federal government. McConnell and the other senators who came before him who had the title "leader" in front of their names have used this impenetrable power to stall progress for decades. Might we even deploy capital letters and brand it the "Scheduling Veto?"

In case it wasn't abundantly clear: McConnell himself circled, highlighted and double-underlined the problem of his "Scheduling Veto" so you couldn't miss it. Responding to a question Thursday about why the Senate wouldn't be taking up a House bill to fix partisan gerrymandering, increase voter turnout, and get big money out of electoral politics, McConnell answered with his trademark grin, "Because I get to decide what we vote on."

Recent years are littered with wreckage of progress blocked by this "Scheduling Veto." In 2013, for example, during the last period when the House and Senate were held by opposing parties, comprehensive immigration reform was popular (supported by between 70 and 80 percent of Americans), bipartisan (passed the Democratic Senate with significant Republican votes) and had a real possibility to become law (President Obama said he had the votes in the House to pass it). However, then-Speaker of the House John Boehner refused to schedule a vote in his chamber.

In that same session, the Employment Non-Discrimination Act (ENDA), a bill that would have made it illegal to fire Americans based on their sexual orientation or gender identity, was popular (about 70 percent of Americans supported it), bipartisan (it passed the Senate by a margin of 32 votes), and had a real possibility to become law (it had several House GOP co-sponsors). But Boehner wouldn't schedule a vote.

But perhaps the most awful, egregious, anti-Democratic of them all was this: In 2016, when President Obama nominated the popular and moderate Judge Merrick Garland for the Supreme Court, whom conservative Republican Senators like Utah's Orrin Hatch praised effusively, McConnell declared that he would not schedule a vote on Garland under any circumstance.

Climate change legislation, gun safety measures and criminal justice reform are just a few matters that have been stalled by the "Scheduling Veto" at one point or another. The battle to pass the latter of these provided perhaps the starkest illustration last year. As the AP reported, "[Senator Chuck] Grassley says more than two-thirds of the Senate supports [criminal justice reform]. But McConnell is refusing to bring the legislation forward . . .  'What's holding it up is our leader, the majority leader,'" Grassley said at the time.

During that fight, Senator Rand Paul, R, Ky., Described the situation in far more blunt terms ". . . Sen. McConnell — he has all the power to allow it or not allow it."

How is it possible that one man, for whom odds are neither you nor I voted, has absolute control over the ignition switch to our country, as well as the brakes, the gas, the wheels, the seats and the windows? After a bloody revolution to escape monarchical rule, our Congress was designed to be a conference of extraordinary citizens representing a polity of constituencies as equals, pushing and pulling our country towards the truest manifestation of the popular will. It's why we call it the People's House. But instead, "Mitch and Nancy" and their predecessors have enjoyed unchecked rule.

It wasn't always like this. The Speaker of the House role, for instance, was initially quite objective, gradually consolidating powers via the adoption of new House rules until the early 1900s, when a pair of Republican speakers – Illinois Rep. Joseph Gurney Cannon and Ohio Rep. Nicholas Longworth – took full control of the House's legislative agenda along with the coercive power to appoint committee chairs and members. Majority leaders in the Senate, on the other hand, weren't even conceived of until 1920, let alone did they wield such imperatorial powers.

In a democracy, what comes to a vote should be determined by a process, a system, a democratic mechanism – not the whims of one person. If a bill fulfills some reasonable procedural trigger point, it should automatically go up for a vote by the entire body.

While there are no signs of improvement on the Senate side, baby steps in the House were recently taken that at least recognize the problem. Under its new Democratic leadership, any legislation that achieves 290 co-sponsors will automatically get a floor vote in the House. That threshold, however, is exceedingly high and not so different than the almost never used "Discharge Petition," which already allows the House to force a vote if an absolute majority of 218 members sign a petition for it. A democratic process should be regular order – not an act of defiance.

In lieu of voluntarily disarmament, the matter could be taken up in the courts. Just as the Supreme Court took away former President Bill Clinton's "line-item veto" on the grounds that it gave the presidency unconstitutional legislative authority, they should take away this unconstitutional "Scheduling Veto" from both the speaker of the House and Senate majority leader, as well. It can be done: in the United States v. Ballin case of 1892, the Supreme Court ruled that while Congress may have significant deference to determine its own rules, those rules may not violate the Constitution or fundamental rights.

This won't fix all this of the problems of our democracy alone, but it could have an outweighed impact. There are numerous, near-universally supported policies that would likely pass if only they could be brought up for a vote. Universal background checks, a pathway to citizenship for DREAMERS, the ability for Medicare to negotiate down drug prices, are a few. Lives would be saved and enriched; our country would be healthier and safer. Except for the will of the majority leader

It's not uncommon for political commentators to advocate reigning in the powers of the presidency. Far less common is a serious conversation about recalibrating the powers of both the speaker of the House and the Senate majority leader, who all but single-handedly control what has the chance to become law in this country. Now is the time to make our way back to democratic order, and vanquishing the "Scheduling Veto" is an obvious first step on that journey.