In the wake of The National Climate Assessment report some Green New Dealers dismiss a carbon tax. They are wrong 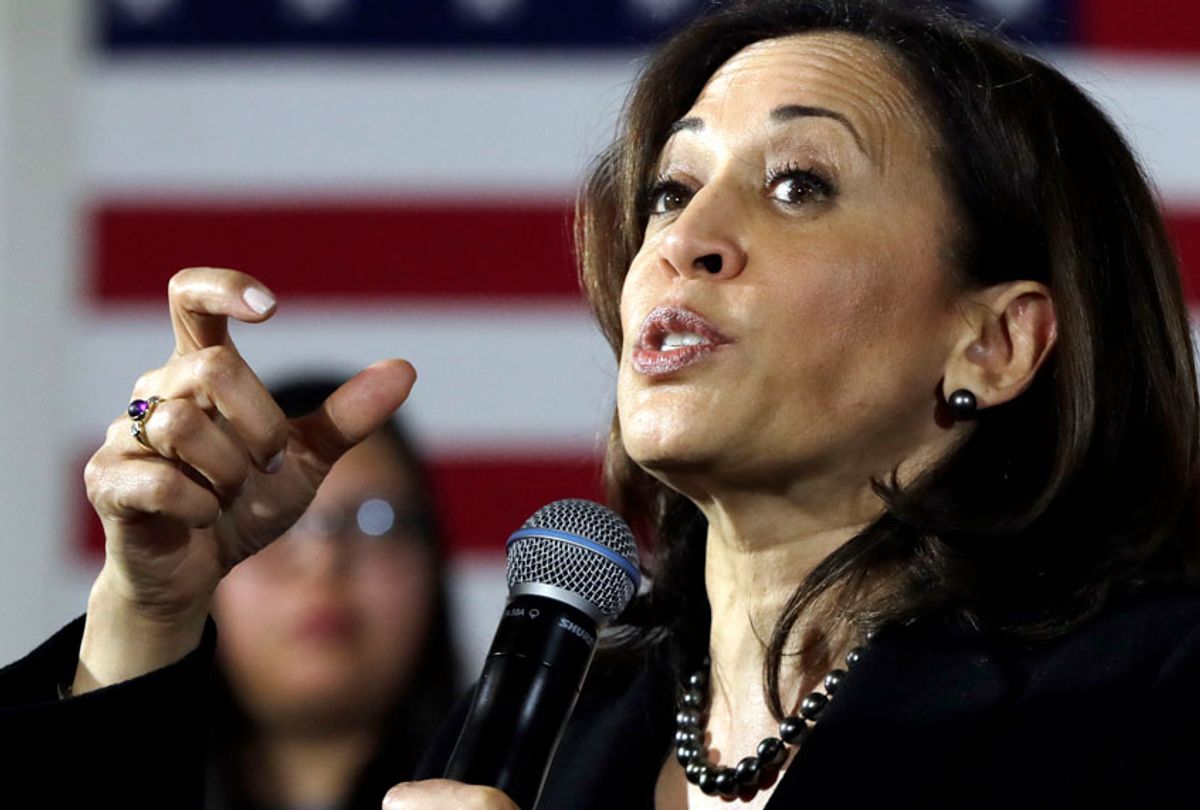 No Democrat is going to win the 2020 presidential nomination without a position on climate change. It was hardly a surprise, then, when in her first-of-the-season town hall on CNN, candidate Kamala Harris was asked if she would endorse the hottest new thing in Democratic environmental politics — the Green New Deal (GND).

Harris’s answer was a firm “Yes,” but like the GND itself, it needed some fleshing out. Climate change is an “existential threat,” she said. “Children need to breathe clean air and drink clean water,” “we have to invest in solar and wind,” she went on. These are not surprising sentiments from a Democratic candidate, but as Brett Hartl,  government affairs director for the Center for Biological Diversity, recently told the Washington Examiner,  “Just saying you support the goals of the Green New Deal is better than nothing, but it really does matter what those details are.”

One detail that definitely matters is the role for a carbon tax in the GND package. Rep. Pramila Jayapal (D-Wash.), co-chair of the Congressional Progressive Caucus, recently spoke about carbon taxes and GND to E&E News, a news organization focusing on energy and the environment. Progressives have been “a little bit all over the place” on a carbon tax, she said. “No one wants to take it off the table,” she continued, but “at the same time, we want to recognize that there are some challenges.”

Some GND supporters, it seems, see a carbon tax as too timid, like trying to fight a forest fire with a garden hose. They have just read the latest U.N. report and the new National Climate Assessment. They see the clock ticking on global catastrophe. A carbon tax may be a nudge in the right direction, they say, but it is still just a nudge. They want to make big changes, and make them fast.

My answer to those fears is that a carbon tax can be a lot more than a tweak or a nudge. It can be as powerful a tool as Green New Dealers are willing to make it. In fact, it should be the centerpiece of a GND package. Here are some ideas how the too-timid kind of carbon tax you may have been thinking about could be made much bolder.

If you think a carbon tax is not enough, then raise it

The most obvious action for those who think that a carbon tax is not enough is to raise the rate. Many proposals envision a carbon tax of $40 or so per ton of CO2, based on estimates of the social cost of carbon conducted during the previous administration. As a rule of thumb, each $1 of tax per ton of CO2 would raise gasoline prices by about one cent per gallon. That means a $40 tax would add 40 cents a gallon to the price of gasoline, with similarly modest effects on other nonrenewable energy prices. Considering that the effective price of gasoline is currently at a historic low, such an increase very well might not have the kind of impact the Green New Deal is calling for.

Backers of doing more and doing it faster can point to estimates that place the social cost of carbon much higher than $40 a ton. For example, a study by Katharine Ricke and colleagues published last year in Nature Climate Change took note of estimates ranging from $10 to $1,000 per ton. Using a variety of socio-economic scenarios, economic damage functions, discount rates, and climate models, their median estimate for the global social cost of carbon was $417 per ton. A carbon tax of $400 per ton would put U.S. gasoline prices roughly on a par with those in European countries like the Netherlands, Germany, or the U.K., where people already choose more efficient cars and use public transportation a lot more than Americans do.

In short, a carbon tax is a flexible policy instrument that can be set at levels reflecting the goals of those who want to take relatively gradual or more aggressive action against climate change. Furthermore, raising the level of a carbon tax is not the only way it can be made more effective. Here are more ideas.

Many proposals limit carbon taxes primarily to fossil fuels. The tax would be levied at the point of extraction and passed along to the consumer through higher prices at the gas pump or the electric meter. Although fossil fuels account for about three-quarters of all human greenhouse gas emissions, emissions from nonfuel industrial sources like cement plants are just as bad, and should also be taxed. So should carbon emitted when goods are produced abroad for consumption in the United States. A border tax could take care of those.

And don’t forget methane, an even nastier greenhouse gas than CO2. About a third of methane emissions come from production and distribution of fossil fuels, especially natural gas but also coal and oil. Those should be taxed at a price reflecting their CO2 equivalent. In the event that some emission sources, for example, leakages from natural gas pipelines, remain under direct regulation, the social cost of carbon used by the EPA in setting regulatory standards should be harmonized with the level of the tax.

Even more methane — more than 35 percent of the total — comes from agriculture. Of that, livestock accounts for as much as 80 percent, through enteric fermentation, manure left on pastures, and land cultivated for livestock feed. A really bold version of a carbon tax, then, would extend to agriculture, especially the livestock sector.

Removing carbon from the air and sequestering it or recycling it as fuel could potentially have a huge impact on climate change. It can be done, but with current methods it is costly. Until recently, estimates were running as high as $600 per ton of CO2. However, there are new methods on the horizon that could bring the cost of direct air capture down substantially. Those technologies could get an immediate boost from a carbon tax that worked both ways — you pay the government if you emit, the government pays you if you sequester.

Even if the carbon tax itself were initially below the cost of carbon sequestration, you could jump-start removal by offering a premium rate for removal for a limited period. For example, if the carbon tax is initially targeted at $400 a ton, but the cost of removal is $600, offer a 2-for-1 bonus for carbon removal, phased out over a 10-year period. The removal process would be profitable immediately, and as the technology matured, costs would drop enough to keep it going without the bonus.

An aggressive carbon tax would make it uneconomical to construct new fossil-fuel power plants while encouraging purchase of more efficient airliners and automobiles. However, both industrial managers and consumers would ignore the sunk costs of previously purchased equipment when deciding whether to continue operating what they already have. Based on fuel costs alone, obsolete vehicles and factories might remain in service for years.

To handle that problem, part of the revenue from a carbon tax could go into a buy-back program to accelerate the retirement of old, emission-intensive equipment. California’s Cash for Clunkers program, which pays up to $4,500 for vehicles that have failed the state’s stringent emissions tests, provides a model that could be applied to everything from obsolete refrigerators to giant coal-fired power plants.

The case for tech-neutral solutions

The above proposals have a one key feature in common: They are all tech-neutral. They don’t try to guess in advance whether algae diesel is more deserving of a subsidy than small modular reactors or advanced energy storage or anything else.

It is easy to underestimate the difficulty of picking winners from among the wide spectrum of new green technologies that are being pursued. When there is no way to know what will work, it makes more sense to offer modest but equal incentives for all alternatives through a tech-neutral mechanism like a carbon tax than to guess which competing fix might work best.

A broad, tech-neutral incentive would also help defuse the danger of opening the choice of winners to influence by special interests. At the same time, it would reduce the risk that that dead ends would never be abandoned, even when they are shown to have failed. The Renewable Fuel Standard, which mandates the use of corn-based ethanol as a motor fuel, is a classic case in point. Environmentalists fell out of love with ethanol long ago, but agribusiness has not.

In contrast, putting a price on carbon emissions is the ultimate in tech neutrality. A price signal would provide unbiased, neutral pressure across the full spectrum of potential methods for cutting emissions. It could be dialed up or down depending on your assessment of the urgency of the climate threat. It could be implemented narrowly to cover fossil fuels only or broadly to encompass industrial sources, farming, carbon removal, and anything else you want to include.

So, Green New Dealers, what’s not to love about a carbon tax?

Addendum: On Feb. 7, the office of Rep. Ocasio-Cortez released a revised draft of a House Resolution calling for a Green New Deal. The GND resolution does not explicitly call for a carbon tax, but it does include a placeholder that could easily be filled by such a tax. Specifically, Sec. 4(B),  found on p. 11 line 22 of the draft, calls for “ensuring that the Federal Government takes into account the complete environmental and social costs and impacts of emissions through (i) existing laws; (ii) new policies and programs.” Clearly, a carbon tax would be one such new policy. However, there appears to be some difference of opinion within the GND camp about the importance of such a tax. Notably, in an FAQ on the GND that was posted on Feb. 7, but then quickly taken down, Rep. Ocasio-Cortez stated that “we’re not ruling a carbon tax out, but a carbon tax would be a tiny part of a Green New Deal.” (What appears to be an authentic copy of the deleted FAQ page can be found here.)