Demolishing Erik Prince: One TV interview shows how to deal with Trump's allies 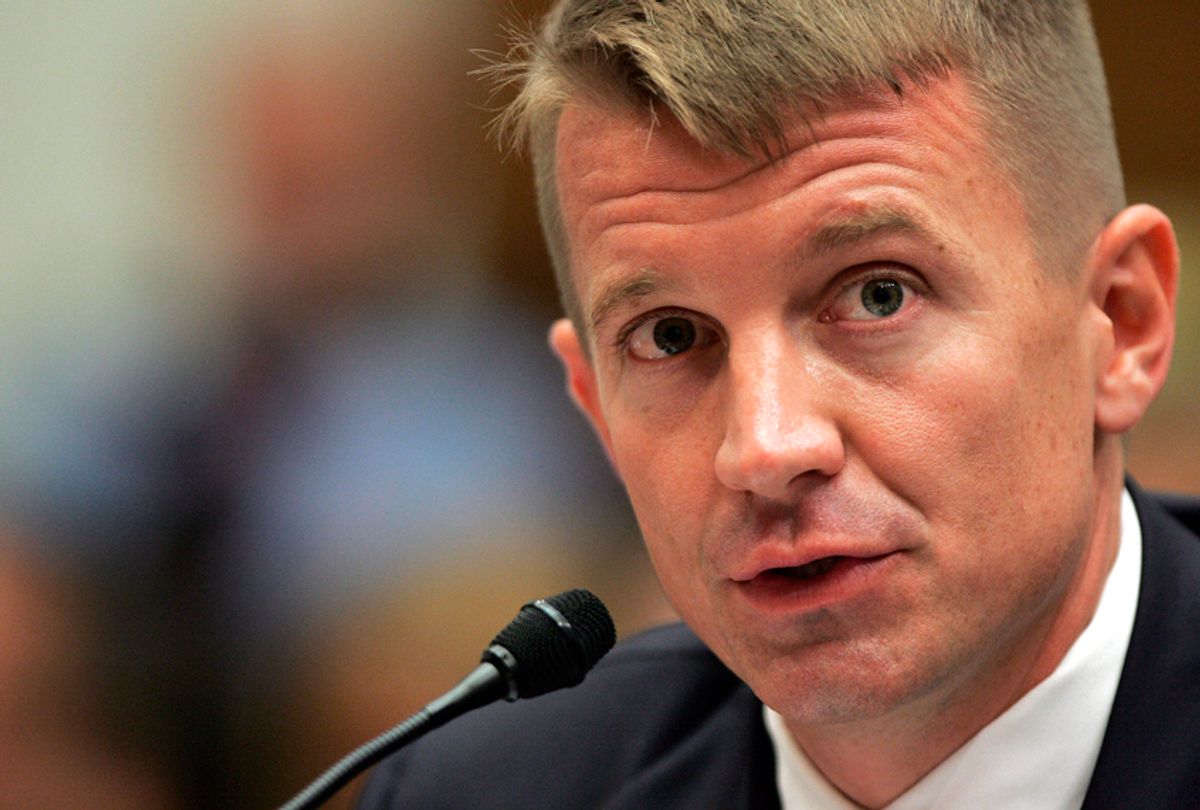 Unusual times demand unusual solutions. If you value Salon's original reporting and commentary, we invite you to support our writers directly. You can make a direct contribution to support Bob Cesca's work here. All funds go straight to our writers.

“He can’t keep getting away with it!” was one of the lines from "Breaking Bad" in which Aaron Paul’s award-winning acting talents were on full soul-crushing display. In the climactic scene from season five, episode 12, Paul’s Jesse Pinkman cries out in mid-nervous breakdown over the fact that Bryan Cranston’s Walter White indeed keeps getting away with one murderously bad decision after another.

Somehow, Donald Trump and his crew of mostly incompetent co-conspirators seemingly keep getting away with it -- flooding the zone with one trespass after another, against the rule of law or against democratic norms or against common decency. To varying extents, we’re all Jesse Pinkman these days, raging for justice and fighting against the slowly metastasizing normalization of Trumpism.

With the exception of a few fearless White House reporters, the press has mostly been hectored into submission when directly challenging the Trump team. Credit where credit is due: Playboy’s Brian Karem and CNN’s Jim Acosta have each risked their posts by refusing to be silenced mid-question by Trump’s stumpy-fingered bullying. Likewise, Rachel Maddow and Lawrence O’Donnell have been particularly relentless in their coverage of the Trump crisis. The print press has provided volumes of reporting along these lines too, but too many White House journalists continue to lose their nerve when battered by Trump’s cowardly aggression against what he calls “the enemies of the people.” (Everything he says and does telegraphs his guilt.)

Into this void comes Mehdi Hasan of Al Jazeera English, host of the program “Head to Head.” Erik Prince, the former Blackwater CEO, Trump lackey and brother of Secretary of Education Betsy DeVos, made the wonderful mistake of appearing on Hasan’s show. I’m sure he regrets the hell out of it now. Here’s why.

In little more than two minutes, Hasan not only illustrated how the press should be confronting the Trump crime family, he also worked his way through Prince’s series of excuses, the likes of which the rest of us commonly refer to as “gaslighting,” the tactic most often employed by Trump and his loyalists to make us feel like up is down, black is white, and we’re losing our minds.

Every observable indicator proves their collective guilt, including and especially Trump’s tweets, yet these ghouls continuously deny it, using childishly flimsy “who me?” excuses that only serve to worsen the appearance of guilt. Again, they can’t keep getting away with it.

Hasan began by quizzing Prince about his November 2017 congressional testimony in which he denied having any contacts with the Trump campaign -- no “official or unofficial” role in the Trump campaign save for posting some yard signs and writing “papers.”

It turns out, however, that among other behind-the-scenes schemes -- including an alleged meeting in the Seychelles to establish back-channel communications with the Russians -- Prince attended an August 2016 Trump Tower meeting in which reps from an Israeli firm, the Psy Group, briefed Prince, Donald Trump Jr., Stephen Miller and George Nader about using social media to manipulate voters.

Hasan asked Prince why he didn’t disclose that meeting in his congressional testimony. Prince replied point-blank, “I did.” Without flinching, Hasan directly quoted the transcript of Prince’s testimony in which Prince flat out said other than the usual yard-sign crap, no, he played no role in the campaign.

This is where the gaslighting gets brutally thick. Prince, apparently taken off guard by the questioning, grinned and said, “We were there to talk about Iran policy.” Hasan asked if perhaps he should have disclosed that to the House Intelligence Committee. Prince: “I did.” Hasan hit back: The testimony doesn’t show any mention of Iran. So Prince scrambled for another preposterous excuse, saying with a grin, “I don’t know if they got the transcript wrong.”

I don’t know if they got the transcript wrong. Seriously. We’re supposed to believe the then-Republican controlled House Intelligence Committee accidentally omitted some BS line about Iran? Sorry, no. Understandably, the “Head to Head” audience laughed out loud at this stupid, crap-on-a-stick excuse by a conspirator whose motives are clear and whose collusion has been independently verified by numerous publications (here, here and here, for example). I mean, Prince himself admitted to Hasan on video that the meeting was real. We know people from the Psy Group were there, too, and we know the purpose had nothing to do with Iran policy.

Erik Prince was entirely cornered. His only recourse should have been to simply confess: he attended the meeting and then lied about it to Devin Nunes’ committee. Instead, we got the flimsiest of all answers: The transcript is wrong. It’s not unlike the president's and Don Jr.’s experimentation with the so-obviously-guilty-it’s-ludicrous idea of putting the investigators on trial. All told, these are alibis torn from the same playbook as the dog ate my homework.

As Deep Throat says in "All the President’s Men," “These aren’t very bright guys and things got out of hand.” Because the Trump gang are all such obvious nincompoops, it ought to be easier for American journalists to corner the Trumps with the kind of laser-like focus Hasan deployed against Erik Prince. While it’s almost hilariously easy to ensnare them in their own lies, every single one of these entitled, privileged, wealthy white guys still believes he can, in fact, keep getting away with it.

It helps, too, when journalists like Maggie Haberman of the New York Times grant them completely undeserved benefit of the doubt or when jurists like Judge T.S. Ellis sentence them to a wrist-slap cushioned by a gushing series of compliments, in the face of the most corrupt campaign and administration in U.S. history.

They think they can get away with it because the press and most of the Republican Party has allowed them to -- from day one. And while a majority of American voters believe Trump and his men are guilty, and while we’re always hearing about Robert Mueller’s Herculean prosecutorial chops while the Southern District of New York is supposedly gearing up to outflank the White House, I’m not convinced the currently unindicted conspirators will ever face the accountability they so thoroughly deserve.

Money, influence and a compliant press are formidable roadblocks in the pursuit of justice, but not if the diligence of law enforcement and the stonewall fortitude of journalists like Mehdi Hasan continue to establish a benchmark for challenging them. No, they can’t keep getting away with it, and here’s to the men and women of strong will and clear eyes who will make sure of it.