Pelosi is right: Dems can't impeach Trump. She should explain that honestly

Nancy Pelosi is correct on the math: It's impossible to impeach Trump now. But her ethical argument is lacking 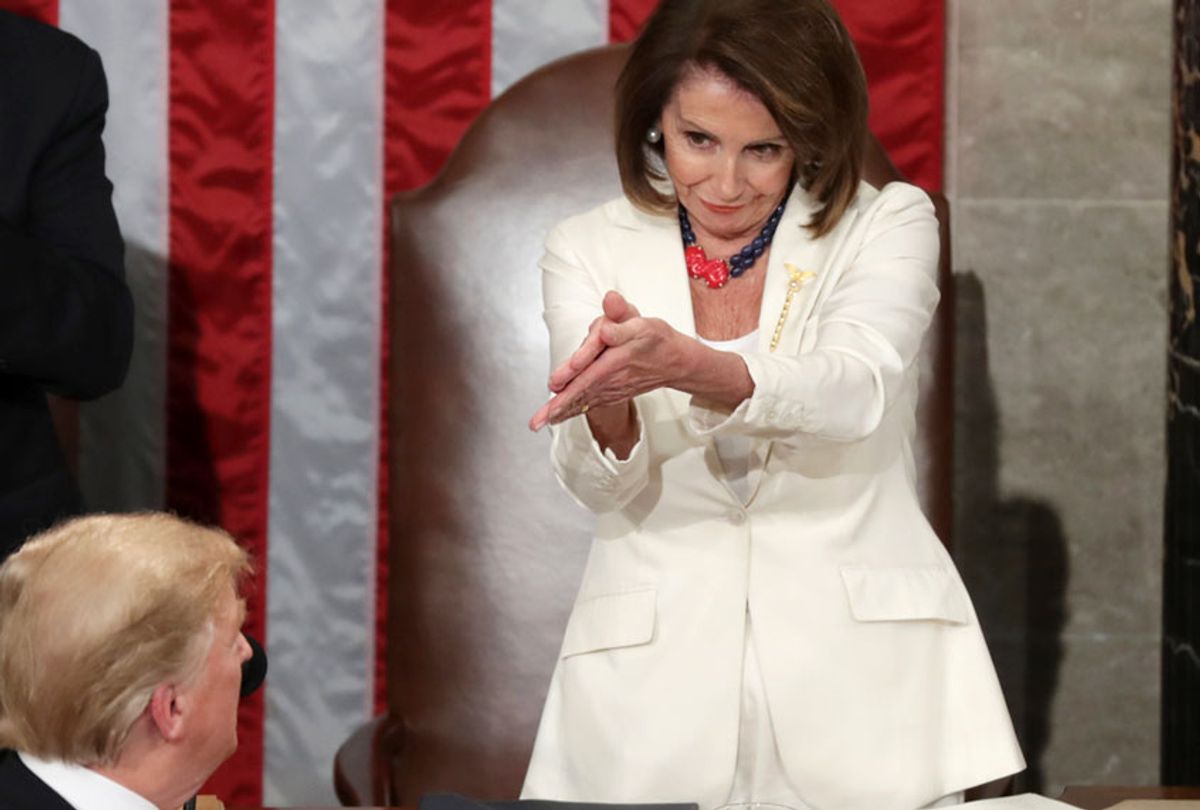 Speaker Nancy Pelosi greets President Donald Trump just ahead of the State of the Union address in the chamber of the U.S. House of Representatives at the U.S. Capitol Building on February 5, 2019 in Washington, DC. (Getty/Chip Somodevilla)
--

House Speaker Nancy Pelosi made a valid point this week about the political impracticality, and likely impossibility of impeaching President Trump. But she expressed it in almost the worst way possible.

"I’m not for impeachment," Pelosi told the Washington Post in an interview published on Monday:

This is news. I’m going to give you some news right now because I haven’t said this to any press person before. But since you asked, and I’ve been thinking about this: Impeachment is so divisive to the country that unless there’s something so compelling and overwhelming and bipartisan, I don’t think we should go down that path, because it divides the country. And he’s just not worth it.

Pelosi's argument can be rebutted in various ways, but Rep. Jamie Raskin, D-Md., put it best, telling CNN that "the Constitution calls for impeachment in cases of bribery, treason and other high crimes and misdemeanors. So the legal case should indeed be compelling, the evidence should be overwhelming and the politics should be bipartisan. He may not be worth it but of course that's not the standard. The country is certainly worth it if the Constitution and the public interest demand it."

Raskin added, "There have, of course, been cases when impeachment investigations have been unifying, as with Richard Nixon."

Those points are valid. Yet there is an undeniable political and mathematical reality in 2019 that was left unspoken by Pelosi but certainly factored into her thinking. Because of the way the impeachment process works, it would be virtually impossible for Democrats to remove Trump from office before the 2020 election.

Technically speaking, "impeachment" is the process by which the House of Representatives decides that the Senate should officially consider removing the president from office. It's roughly equivalent to an indictment in a standard criminal proceeding. If the House votes to impeach (by a simple majority), a trial follows before the Senate, presided over by the chief justice of the Supreme Court. Two-thirds of all senators must vote to convict, meaning they've concluded that the president's crimes or misdeeds warrant removing him from office.

So as a practical matter, 67 votes would be required to oust Trump. There are only 47 Democrats in the current Senate (counting the two independents, Angus King and Bernie Sanders), so at least 20 Republicans would have to vote to convict Trump. To say that's highly unlikely would be an understatement. To say that it might happen if pigs learn to fly and hell freezes solid (on the same day) might be closer to the mark.

So Nancy Pelosi is correct to say that expending significant energy on impeachment would be pointless and divisive. If the Democrats held 55 or 60 Senate seats, or if Republicans weren't so united behind Trump, it might be an entirely different equation. But if Trump is impeached by the House and then acquitted in the Senate (as Bill Clinton was the last time we went through this), Democrats will have offered him a potent political weapon.

Trump would clearly present such an acquittal as a total vindication, and his supporters would eagerly play along, as would at least some swing voters who don't follow the news closely. Hey, the president was acquitted! Therefore he did nothing wrong, it was all fake news, etc. The whole spectacle would divide the country still further -- if that's even possible -- and might well lead to an electoral victory for Trump and the Republicans in 2020.

I don't know why Pelosi didn't make those points directly, since there can be no doubt that she's thought about them already. Perhaps she doesn't want to be perceived as overly focused on raw political calculus and decided she had to find more persuasive moral high ground. "He's just not worth it" wasn't exactly her finest rhetorical hour. But when it comes to the politics of impeachment, she's right: It's a waste of time.