Tucker Carlson is probably safe: He's too valuable to the GOP for Fox to cut him loose

Carlson is good at leveraging bigotry to get viewers to vote against their own interests. Republicans need that 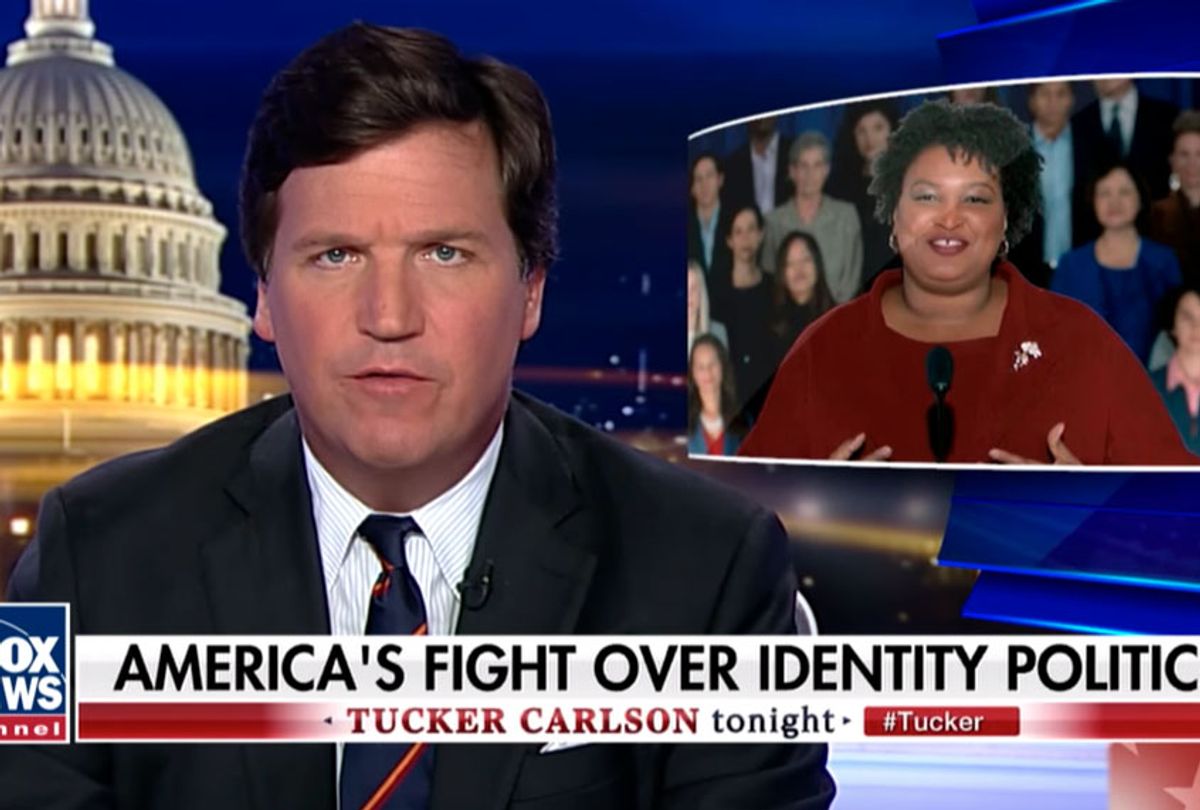 Of course there was more. On Sunday, the watchdog organization Media Matters released its first report garnered from listening to Fox News host Tucker Carlson's multi-year habit of spending an hour a week on the shock-jock show "Bubba the Love Sponge." That made clear how much Carlson enjoyed wallowing in misogyny and also exposed his bizarre defensiveness about forced child marriage. After the 24-hour news cycle, complete with op-ed reactions (including Salon's) and a non-apology from Carlson, Media Matters came in for round two, the blatant racism edition.

Researcher Madeline Peltz, who deserves hazard pay for sitting through so much of the Florida-based "Bubba" radio show, chronicled in this second piece how Carlson called Iraqis "semiliterate primitive monkeys" and said that Afghanistan will never be "a civilized country because the people aren't civilized." Echoing the rhetoric commonly found on white nationalist and neo-Nazi sites, Carlson argued that white men deserve the credit for "creating civilization." (Carlson, who graduated from Trinity College, should know that writing, the city and possibly the wheel were all invented in ancient Mesopotamia, known today as Iraq.) He griped that radio diversity initiatives were "worse than Jim Crow" and said Michelle Obama "got ghetto and started snapping her neck." There's plenty more, but readers will get the picture.

Carlson's Fox News show has already been bleeding advertisers, thanks to previous on-air comments about how immigrants make the country "poorer and dirtier." In response to the Media Matters exposé, activists have renewed the pressure campaign on advertisers, demanding that they stop supporting Carlson's show. On Wednesday morning, a protest outside Fox headquarters in Manhattan is planned to coincide with an advertiser meeting.

In the past, Fox News has dropped hosts like Bill O'Reilly and Glenn Beck after they became too controversial, and progressive activists clearly hope something similar will happen here. But there's a reason that Carlson is digging in, using his Monday night show to paint himself as a victim of political correctness and to rally the right-wing troops to his side. Even if his show starts losing money for Rupert Murdoch's empire, Carlson may be too valuable to the Republican Party for Fox News to take his show away.

While the crassness of the language in the "Bubba" clips might be shocking, the ideology on display — both in the misogynist comments and the white nationalist comments — isn't much different than what Carlson has peddled on his Fox News show since he took over the prime evening slot from O'Reilly. For at least the last couple of years, Carlson has been taking ideas from fringe right-wing movements such as misogynist forums and white nationalist groups, cleaning them up with some euphemistic language, and presenting them as mainstream conservative commentary. That's why neo-Nazis and other white nationalists love Carlson: They see him as the main conduit, perhaps even more than Donald Trump, for making their false conspiracy theories and repugnant ideas seem vaguely normal.

That's also why Republicans need Carlson. The big story of the Trump years has been that of Republicans deciding — or perhaps realizing — that racist and sexist grievances are their best bet for staying competitive in electoral politics. They can't run on their actual policies of massive tax cuts for the wealthy, paid for by slashing programs like Medicare on which their elderly voting base heavily depends. The decline of religious fundamentalism and the corresponding surge in support for abortion rights and same-sex marriage has made it harder for Republicans to run on those kinds of culture-war issues, as well.

All Republicans feel they have left is to inflame white people's fears of increasing diversity and men's resentment of the #MeToo movement and women's growing independence.

That's where Carlson comes in. His combination of opportunism, rhetorical cleverness, bad faith and the total absence of any moral compass makes him uniquely capable of crafting a new conservative language suited for the era of Trump. Carlson knows how to take the incoherent rants of angry white men in internet comment sections and subreddits and rewrite them to sound slightly more educated and borderline acceptable.

Carlson knows that what modern conservatives want is sexism free of the prudery and piety of the religious right. Further more, they're sick of the more coded racism of the past and want unvarnished diatribes about how immigrants are dirty and white people are the real victims, since it's less acceptable than it once was to use overt racial slurs.

Carlson can deliver all that expertly, running segment after segment that normalizes racism and misogyny, usually by portraying those who peddle such ideologies as victims of "political correctness" and the left-wing thought police. In recent months, he's even started to use his audience's legitimate grievances about income inequality and corporate overreach as fodder to get them to vote for Republican candidates, who vigorously support those things.

Carlson has an undeniable gift for making hateful ideologies and irrational attitudes sound smarter and more commonsensical than they are. He employs lofty-sounding terms like "Western civilization" when what he really means is white nationalism. In doing so, he aids Republicans in their endless quest to convince large numbers of white people to vote their resentments over their actual economic self-interest. The GOP needs Carlson, and he knows it.

Fox News is a profit-driven corporation, of course. There have been occasions in the past where that has mattered more than protecting some on-air personality whose name has become toxic to advertisers. So there's some reason for progressives to hope that can happen to Carlson.

But as a recent in-depth expose by Jane Mayer at the New Yorker demonstrated, Fox News is more than a profit-driven corporation. It's the propaganda arm for the Republican Party and now, especially, for the Trump administration. And it's a highly effective one, at that. As political scientists from Stanford and Emory have shown through research, without Fox News, the Republican voter share would have been nearly four points lower in the 2004 election, and more than six points lower in 2008. In other words, Republicans, who often prevail on razor-thin margins in swing districts or purple states, largely owe their share of power to Fox News.

Even if the Fox brass sees the company's profit margins shrink because of the controversy surrounding Carlson, it's likely still worth it to keep on doing whatever it takes to keep electing Republicans, driving down their own tax rates, and empowering corporations and rich people. Carlson could potentially lose half his advertisers without losing his value at driving white voters to the Republican Party.

According to reporting from the Washington Post, News Corp. chairman Rupert Murdoch, the ultimate boss of Fox News, is a proponent of the "never back down" strategy Carlson is employing, and fears "appearing weak in the face of negative public sentiment." Murdoch's approach makes sense for the audience Fox News is trying to cultivate, which is mainly white people -- and especially older white men who view women and people of color as inferior and are sick of being made to feel bad about it. By refusing to back down or apologize for misogyny or racism, Fox News not only appeals to those stubborn attitudes, but plays to the enduring desire to "stick it to the libs" whose very existence makes Fox viewers feel guilty.

That's what the narrative of "political correctness" is all about: Teaching conservative viewers that bigotry is a form of courage, and that politics is about irrationally lashing out at other people instead of lifting yourself up. Carlson peddles this narrative better and more shamelessly than anyone. As long he can keep herding people to the polls to vote for Republicans -- and against their own real-world interests -- he'll likely have a home at Fox News.