U.S. women's soccer gender discrimination suit could be a game-changer for equity in sports 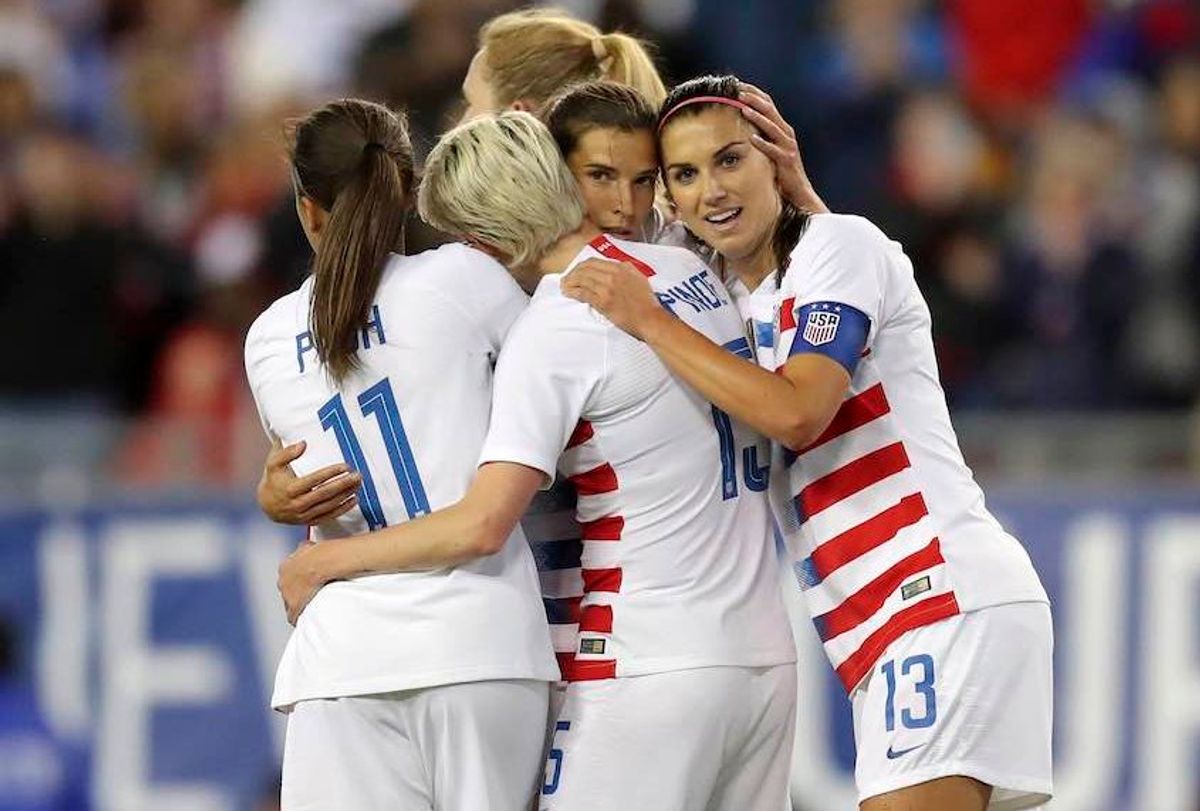 United States' Tobin Heath, second from right, is congratulated on her goal by Mallory Pugh (11), Megan Rapinoe and Alex Morgan (13) during the first half of a SheBelieves Cup soccer match against Brazil in Tampa, Fla. (AP/Mike Carlson)
--

On March 8 — International Women's Day — 28 members of the world champion U.S. women's soccer team filed a gender discrimination lawsuit against U.S. Soccer, claiming that the United States Soccer Federation (USSF) "has utterly failed to promote gender equality." It is the latest push from women's soccer in its fight for equity — both regarding pay and working conditions — and part of a larger groundswell of women athletes speaking up about gender disparities in sports.

"Despite the fact that these female and male players are called upon to perform the same job responsibilities on their teams and participate in international competitions for their single common employer, the USSF, the female players have been consistently paid less money than their male counterparts," the lawsuit, obtained by the New York Times and filed in California district court on Friday, reads. "This is true even though their performance has been superior to that of the male players — with the female players, in contrast to male players, becoming world champions."

The class action lawsuit was filed three months before the U.S. women's national team will defend its title at the Women's World Cup. It highlights several statements from USSF leadership declaring that gender equity is a priority, but that ultimately, the company "has paid only lip service to gender equality and continues to practice gender-based discrimination against its champion female employees."

The women's soccer players say that the gender-based discrimination affects far more than their paychecks, and that USSF also denies them "equal playing, training, and travel conditions; equal promotion of their games; equal support and development for their games; and other terms and conditions of employment," according to the suit. Soccer stars Alex Morgan, Megan Rapinoe and Carli Lloyd, among more than two dozen others, are named as plaintiffs.

The lawsuit, filed under the Equal Pay Act and Title VII of the Civil Rights Act, comes two years after the U.S. women's team reached a collective bargaining agreement with USSF, and most significantly, three years after Morgan, Lloyd, Rapinoe, former goalkeeper Hope Solo, and Becky Sauerbrunn filed a charge of discrimination with the Equal Employment Opportunity Commission. After years of inaction, the EEOC last month offered the go ahead for the players to sue.

"Each of us is extremely proud to wear the United States jersey, and we also take seriously the responsibility that comes with that," Morgan said in a prepared statement to the Associated Press. "We believe that fighting for gender equality in sports is a part of that responsibility. As players, we deserved to be paid equally for our work, regardless of our gender."

The outspokenness and action from U.S. women's soccer players in recent years builds on the momentum of women athletes demanding equality more broadly, from tennis, to the WNBA, to women's hockey, to surfing, to female ski jumpers. In several of these industries, the protests and advocacy have been successful, but in the era of #MeToo and Time's Up where gender-based discrimination is front and center, this lawsuit may be a turning point.

There is already evidence demonstrating the power of it. On the same day that the suit was filed, Adidas pledged to pay the players it sponsors equally and that it would award those on the winning Women's World Cup team with the same performance bonuses as their male peers. "We believe in enabling the next generation of female athletes, creators and leaders through breaking barriers," the company said in a statement.

The Time's Up Twitter account also sent out a tweet in support with the women's soccer players. Hopefully, the U.S. men's team is preparing their own statement in solidarity.

Rapinoe, the U.S. team captain, told the Washington Post that she and her teammates were motivated beyond their own interests. The nature of the class action and collective lawsuit is that it also represents past players for the national team who have been denied equal pay. And, beyond standing up for even just women soccer players, Rapinoe hopes the suit sends a message to girls and women all over the world, in all sectors, to "Fight for what you’re worth. And never accept anything less."

The USSF has declined to comment thus far and it will be telling how they respond to the U.S. women's team, currently ranked number 1 worldwide. Critics of equal pay in sports will often cite profitability, success level, and prestige as reasons why a gender pay should exist; this line of reasoning is often deployed when discussing the enormous pay gap between NBA and WNBA players, in which the minimum starting salary for NBA players is approximately eight times that of a starting WNBA player. What's often left out in these conversations is the systematic inequalities that exist and persist for female athletes, from children to pros, where at every age and stage female leagues are traditionally relegated as second-class, in both funding and support.

"First and foremost, nobody understands better than us the power of winning — the power that we can be as changemakers," Rapinoe told the Post. "The team has always been very willing to use its voice to speak to all women everywhere — to say: 'We are with you. We’re behind you. We support you, and we’re right there in lockstep.'"

It's encouraging that Rapinoe and the other plaintiffs involved are addressing a wide vision for an equal future, and that Time's Up sees its work in concert with the women's team. This lawsuit will test the expansive power of #MeToo as a movement that can grow beyond addressing sexual abuse to work toward eradicating gender inequalities in every industry and in every way.

Standing on the shoulders of trailblazers like Katherine Switzer, Billie Jean King and Venus and Serena Williams, the world champion women's soccer team will likely lay the groundwork for others and in their actions, they are embodying one of King's most iconic quotes: "Everyone thinks women should be thrilled when we get crumbs, and I want women to have the cake, the icing and the cherry on top, too."