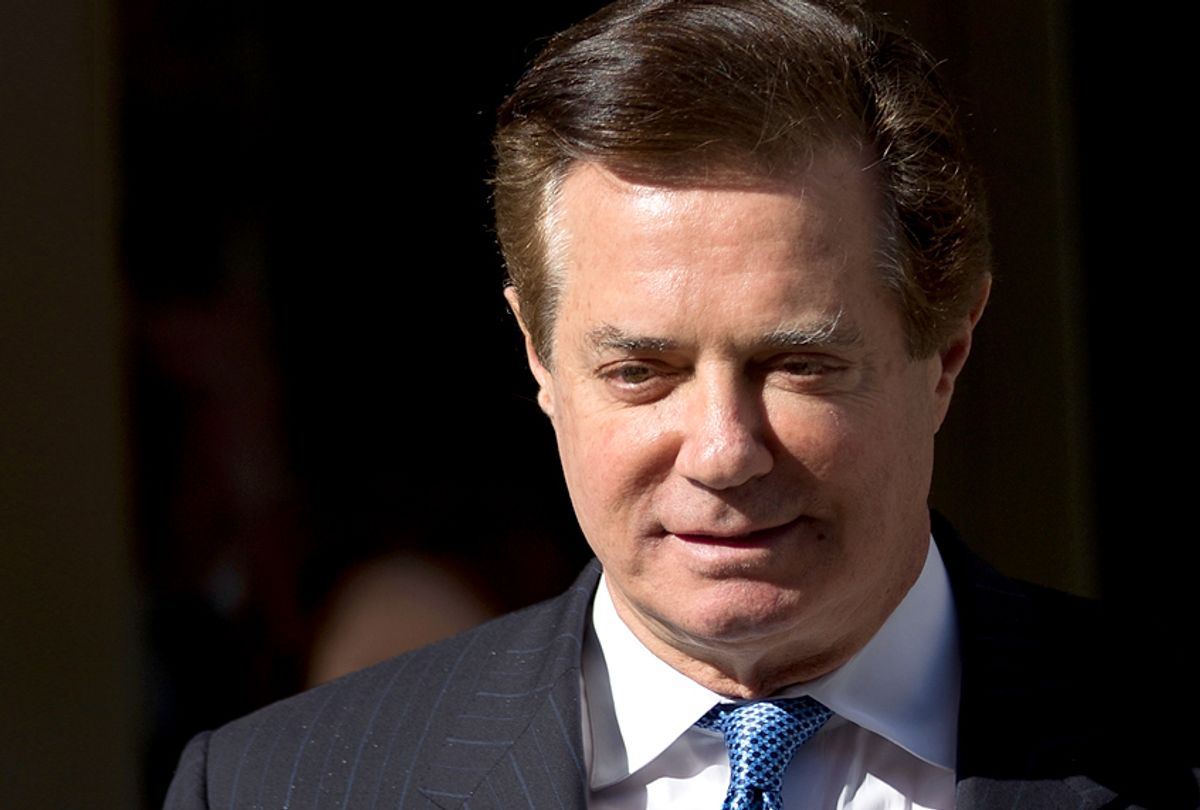 Paul Manafort, the longtime Republican consultant who spent five months as President Donald Trump's campaign chairman during the 2016 election, was indicted Wednesday by the Manhattan District Attorney in connection to a mortgage fraud scheme.

District Attorney Cyrus Vance Jr. announced 16 charges against Trump's former campaign manager, including attempted mortgage fraud, conspiracy, falsifying business records and residential mortgage fraud, within minutes of Manafort's sentencing at a Washington courthouse on conspiracy charges he pleaded guilty to last year as part of a deal. Under the agreement, Manafort said he would fully cooperate with special counsel Robert Mueller's investigation into allegations of collusion between the commander-in-chief's presidential campaign and the Russian government.

In the 11-page indictment, which was filed in New York Supreme Court in New York City, state prosecutors detail a yearlong scheme in which Manafort allegedly falsified business records to obtain millions of dollars in loans. The indictment claims Manafort engaged in the illegal conduct between December 2015 and January 2017.

"No one is beyond the law in New York," Vance said in a statement. "I thank our prosecutors for their meticulous investigation, which has yielded serious criminal charges for which the defendant has not been held accountable."

The new state charges against Manafort stem from an investigation started by investigators in New York in March 2017, Vance said, roughly seven months before Manafort was indicted on a litany of financial crimes by the special counsel's office.

Judge Amy Berman Jackson of the U.S. District Court of Columbia sentenced Manafort to an additional 3.5 years in prison on Wednesday. That punishment marked Manafort's second round of sentencing as part of Mueller's probe. With Jackson's sentence, Manafort is set to serve 7.5 years in behind bars. He was sentenced last week to nearly four years in prison by Judge T.S. Ellis of the U.S. District Court in Alexandria, Va. for crimes uncovered by Mueller, which included illegal lobbying on behalf of pro-Russia political forces in Ukraine, hiding the millions of dollars he made in overseas bank accounts, falsifying business records and lying to banks to keep the cash flowing then urging witnesses to lie on his behalf when he was caught.

Manafort joined Trump's presidential campaign in March 2016 and became his campaign chairman that May before he was forced to resign in August 2016 following reports of his Ukraine lobbying. He was previously thought to be a key witness for Mueller as he investigates allegations of collusion between the campaign and the Russian government. He was indicted in October 2017 along with his longtime business associate and Trump campaign official Rick Gates, who has since pleaded guilty and agreed to cooperate with prosecutors.

Trump and his allies are likely to criticize the timing of Vance's announcement, which came minutes after Mueller wrapped up his prosecution of the former campaign chairman.

Trump has defended Manafort amid his ongoing federal trials, telling reports his former campaign manager "has nothing to do with our campaign, but I will tell you I feel a little badly about it. They went back 12 years to get things that he did 12 years ago."

It remains unclear whether a presidential pardon is in the future for Manafort. Trump has not officially ruled it out and continues to express sympathy for his former campaign chairman. After Ellis handed down Manafort's 47-month sentence last week, Trump said he felt "very badly for Paul Manafort."

While Trump could pardon Manafort for his federal crimes, he does not have the authority to issue pardons in state cases. That is to say, if Manafort is convicted in New York, Trump cannot pardon him, and he could face up to 25 years in prison there.

Manafort's legal team is likely to challenge the new indictment on double-jeopardy grounds, arguing the charges brought against Manafort in New York are the same as the ones the former Trump campaign chairman went on trial for in Virginia.