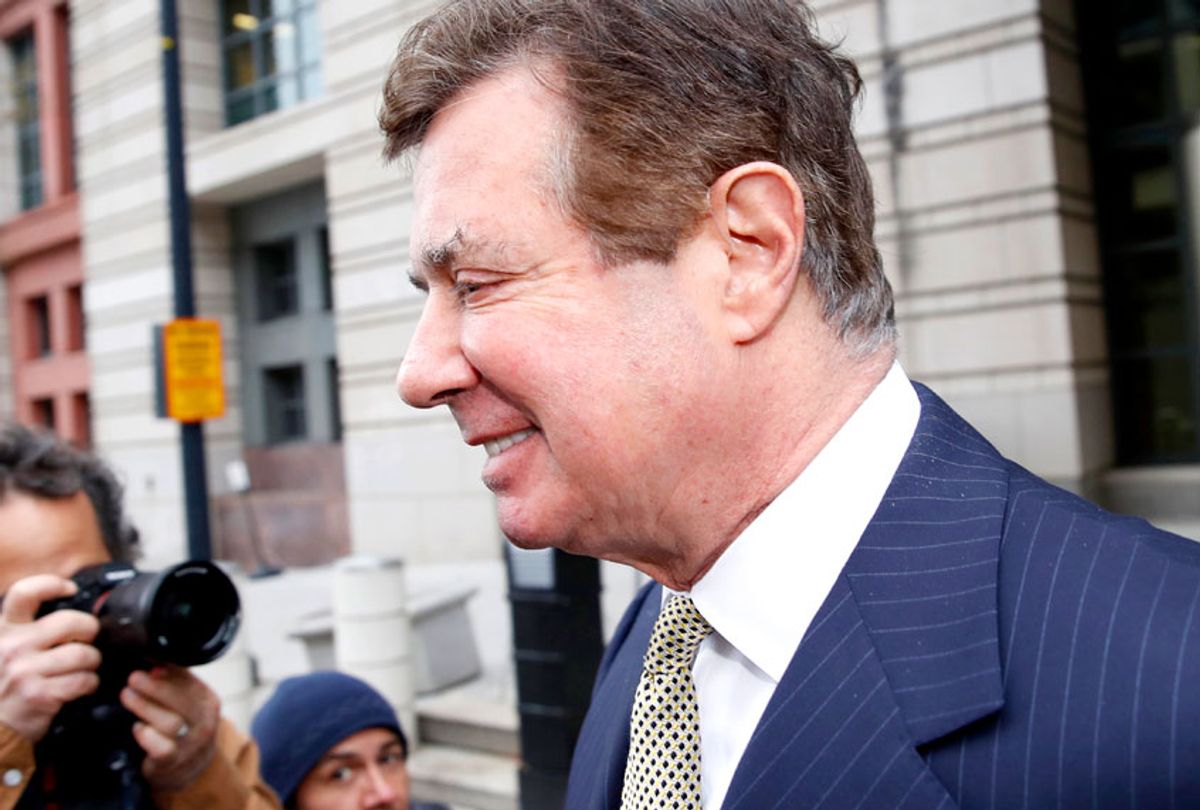 Editor's Note: This story was updated at 19:27 after Manafort's sentencing concluded.

Longtime Republican consultant Paul Manafort, who spent five months as President Donald Trump's campaign chairman during the 2016 election, has been sentenced to 47 months in prison. The sentence was issued by U.S. District Court Judge T.S. Ellis III on Thursday evening. The sentencing concluded the first criminal trial of special counsel Robert Mueller's investigation into allegations of collusion during the 2016 election. It is the longest sentencing to be given to a Trump associate in special counsel Robert Mueller's Russia investigation.

Manafort was convicted in August and convicted of eight felony counts, including filing false tax returns and bank fraud. He is expected to face another sentence in a separate case next week after he pled guilty to illegal lobbying.

The 69-year-old Republican consultant who was found guilty in August of charges that include bank and tax fraud. Though Manafort originally faced a 19 to 24 year prison term under sentencing guidelines — essentially a life sentence given his age — his lawyers asked U.S. District Court Judge T.S. Ellis III for a "significantly" lower sentence given his age, failing health, low risk of reoffending and cooperation with the special counsel's office. They also said Manafort is "truly remorseful" for his conduct — illegal lobbying on behalf of pro-Russia political forces in Ukraine, hiding the millions of dollars he made in overseas bank accounts, falsifying business records and lying to banks to keep the cash flowing then urging witnesses to lie on his behalf  when he was caught — and that he has accepted responsibility for his actions.

Manafort's lawyers also noted their client admitted he was guilty of the other 10 charges of fraud that resulted in a hung jury in his Virginia trial and that he agreed to cooperate with Mueller's investigation as part of a plea deal to avoid a second trial on separate charges brought by Mueller in the District of Columbia. Under the original plea deal, Mueller had agreed to recommend that Manafort serve his Washington sentence concurrent with his Virginia sentence. After Manafort botched his cooperation agreement in the Washington case, U.S. District Court Judge Amy Berman Jackson may decide that Manafort should serve the sentences concurrently or consecutively — a decision that will come in Manafort's second hearing on March 13. Manafort faces a maximum of 10 years for those crimes. Mueller's prosecutors have so far not taken a position on what Manafort's sentence should be, although they are expected to weigh in during the Washington hearing on whether the sentences should be concurrent or consecutive.

In a 17-page court filing submitted late Tuesday to the U.S. District Court in Virginia, Mueller pushed back against Manafort's assertion that he has accepted responsibility for his crimes and deserves a reduced sentence, arguing that the longtime Republican consultant shows a "lack of remorse." "The defendant blames everyone from the special counsel's office to his Ukrainian clients for his own criminal choices," the prosecutor wrote.

"Manafort suggests, for example, that but for the appointment of the special counsel’s office, he would not have been charged in connection with hiding more than $55 million abroad, failing to pay more than $6 million in taxes and defrauding three financial institutions of more than $25 million dollars," Mueller added.

Prosecutors also reiterated Manafort's criminal conduct and argued that even though Manafort admitted his guilt in his plea agreement in a separate case brought against him by Mueller in Washington, he was found by the judge there to have breached that plea agreement by lying to federal prosecutors, the FBI and a federal grand jury. Manafort reached that cooperation agreement with prosecutors to avoid a second criminal trial on separate charges in the nation's capital.

"He neither pled promptly nor provided complete and honest cooperation. He also has not paid back any of the taxes owed," prosecutors said. Manafort, according to the filing, owes the government millions of dollars in taxes. However, the government cannot "be sure of the full extent of Manafort's assets,” because he never submitted a financial statement to any court, which prosecutors pointed out is "yet another example that he has failed to accept responsibility." They also said Manafort owes the U.S. Treasury over $6 million in taxes.

Prosecutors stated that Manafort "poses a serious risk of recidivism," noting his "lies to the government and grand jury are aggravating factors and an additional basis for the denial of any reduction for the acceptance of responsibility."

"Here, a court has already found Manafort lied to the government and the grand jury," Mueller said. "That is not a basis for a lower sentence, but rather a more severe one."

Prosecutors also contended that Manafort was not experiencing the dire health problems he had claimed in previous filings and has failed to submit a report from a doctor or shown that the Bureau of Prisons is unable to treat his medical conditions.

"None of his prescribed treatments or medications indicates that his life is in any danger from a long period of incarceration," prosecutors wrote.

It is now up to Ellis to determine how much time Manafort will spend in prison. Ellis suggested early in the case that Mueller was prosecuting Manafort just to get to Trump, since the charges on which Manafort was found guilty after his August trial were unrelated to the special counsel's investigation into election interference or possible collusion with the Trump campaign.

"Given the investigation's focus on President Trump's campaign, even a blind person can see that the true target of the special counsel's investigation is President Trump, not defendant, and that defendant's prosecution is part of that larger plan," Ellis wrote in a June 2018 opinion that ultimately allowed Mueller to proceed with the case. "Specifically, the charges against defendant are intended to induce defendant to cooperate with the special counsel by providing evidence against the president or other members of the campaign. Although these kinds of high-pressure prosecutorial tactics are neither uncommon nor illegal, they are distasteful."

The sentence imposed by Ellis will likely impact how harsh Jackson is next week in her sentencing. Another plausible outcome could involve a presidential pardon, which Trump said he has not ruled out.

"It was never discussed, but I wouldn't take it off the table. Why would I take it off the table?" Trump said last November. At the time, Democratic Rep. Jerry Nadler of New York, the chairman of the House Judiciary Committee, warned Trump that "even dangling a pardon" for Manafort "would fortify a claim or charge of obstruction of justice."