New York prosecutors are prepared to charge Paul Manafort if he receives a pardon from Trump: report 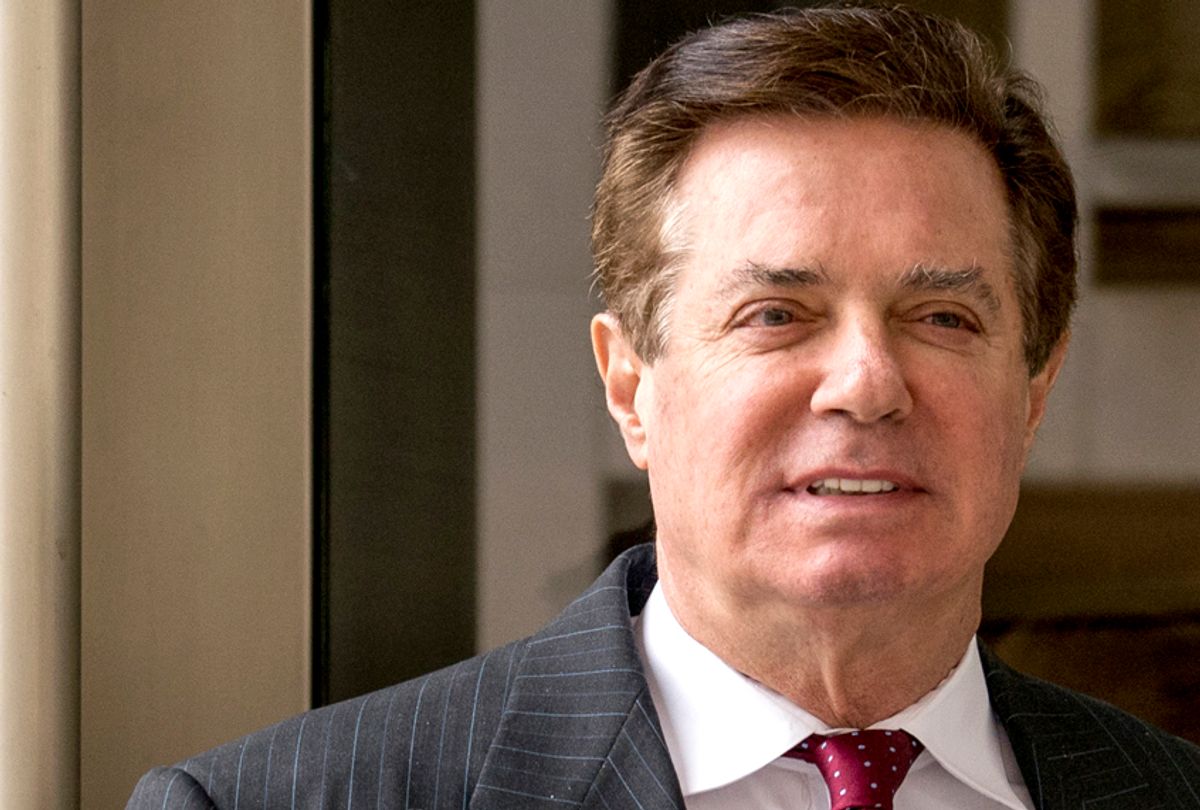 New York state prosecutors are reportedly preparing to file criminal charges against Paul Manafort, the longtime Republican consultant who spent five months as President Donald Trump's campaign chairman during the 2016 election, in the event that he receives a presidential pardon.

Manafort was convicted last year on eight counts of bank and fraud tax, and he pleaded guilty to two more charges of conspiracy and lying to the FBI. He is scheduled to be sentenced next month in two separate federal criminal cases, in Virginia and in Washington, for crimes related to foreign lobbying and advising pro-Russian politicians and oligarchs in Ukraine in the years before he joined Trump's presidential campaign.

Prosecutors working for special counsel Robert Mueller, who brought the case against Manafort and is investigating allegations of collusion between Trump's presidential campaign and Russia, recommended that Manafort serve as long as 24.5 years  in prison in the Virginia case — essentially a life sentence for the 69-year-old. He is scheduled to be sentenced at a U.S. district court in Virginia on March 8, according to a court filing posted Thursday.

Manafort also awaits a March 13 sentencing date in a separate case brought by Mueller in Washington, where he pleaded guilty to conspiracy charges and charges of lying to federal prosecutors and a grand jury. Mueller's office must submit a sentencing memo recommending a length for Manafort's prison sentence to District Court Judge Amy Berman Jackson no later than Friday.

In Virginia, U.S. District Court Judge T.S. Ellis III had scheduled Manafort's sentencing for early February, but the hearing was postponed until attorneys resolved a dispute over whether Manafort had breached his plea deal with Mueller in the Washington case. Jackson ruled last week that Manafort had purposefully lied to the FBI, as well as to Mueller's team, about contacts he had with Trump administration officials and his connections to Russian-linked intelligence officers two months after reaching a plea deal, thus voiding it and allowing Mueller to recommend a harsher sentence.

Lawyers for Manafort claimed in court filings that he did not make "intentional misstatements" and "provided complete and truthful information to the best of his ability" over the course of 12 meetings with government attorneys and federal prosecutors. His defense team also stated that "conditions of Mr. Manafort's confinement have taken a toll on his physical and mental health" and weighed on his "state of mind and on his memory."

"A presidential pardon would not protect Manafort from state-filed criminal charges," Bloomberg News reported. "The longtime Republican operative could be sentenced to two or more decades in prison under federal sentencing guidelines."

Last November, Trump, speaking of a pardon for Manafort, said he "wouldn't take it off the table." At the time, Democratic Rep. Jerry Nadler of New York, the chairman of the House Judiciary Committee, warned Trump that "even dangling a pardon" for Manafort "would fortify a claim or charge of obstruction of justice."