Nadler warns Trump: "Dangling a pardon" in front of Manafort is "dangerously close to obstruction"

Rep. Jerry Nadler will lead the House Judiciary Committee when Democrats take back control of the House in January 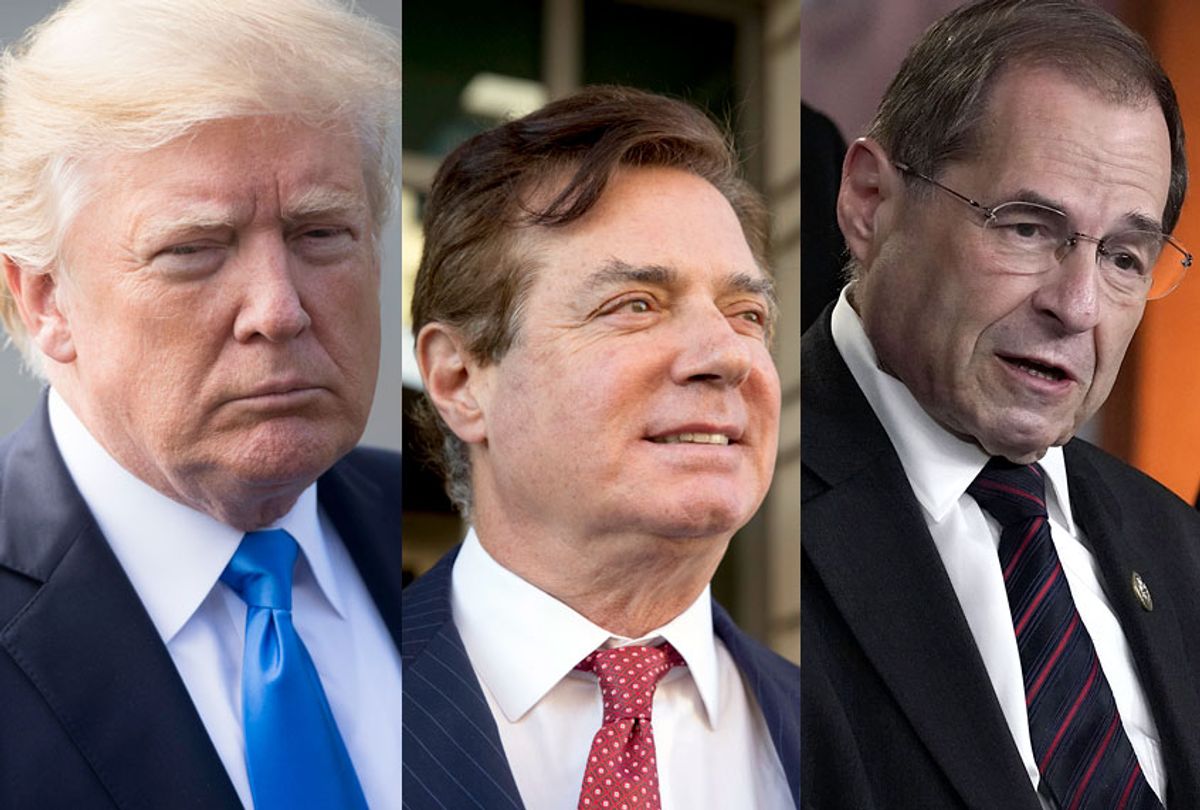 Rep. Jerry Nadler (D-N.Y.), who will head the House Judiciary Committee when Democrats take back control of the House of Representatives this January, warned President Donald Trump that "even dangling a pardon" for his former campaign chairman Paul Manafort "would fortify a claim or charge of obstruction of justice."

"I suspect they're dangling a pardon in front of Manafort," Nadler said Tuesday during an appearance on CNN. "But the president should understand that even dangling a pardon in front of a witness like Manafort is dangerously close to obstruction of justice and would just fortify a claim or a charge of obstruction of justice against the president."

Robert Mueller, the special prosecutor investigating allegations of collusion between Trump's 2016 presidential campaign and the Russian government, informed a federal judge on Monday that he has voided his cooperation agreement with Manafort, the longtime Republican consultant who spent five months as Trump's campaign chair during the 2016 campaign. Mueller said Manafort lied to the Federal Bureau of Investigation, as well as his team, two months after reaching a plea deal in the Russia probe. Manafort was previously thought to be the star cooperator in the special counsel's ongoing federal investigation.

Manafort pleaded guilty to conspiracy and witness tampering on Sept. 14, almost a year after he was first charged and following his conviction by a federal grand jury in a separate but related case on eight counts of various tax and bank fraud charges.

"Any attempt to get him to change his testimony or not to testify by dangling a pardon would be very, would be obstruction of justice," Nadler concluded.

The president on Tuesday appeared panicked after Mueller turned on Manafort.

In a pair of successive tweets, Trump wrote, "….The Fake News Media builds Bob Mueller up as a Saint, when in actuality he is the exact opposite. He is doing TREMENDOUS damage to our Criminal Justice System, where he is only looking at one side and not the other. Heroes will come of this, and it won’t be Mueller and his…" and that "….terrible Gang of Angry Democrats. Look at their past, and look where they come from. The now $30,000,000 Witch Hunt continues and they've got nothing but ruined lives. Where is the Server? Let these terrible people go back to the Clinton Foundation and 'Justice' Department!"

"The Phony Witch Hunt continues, but Mueller and his gang of Angry Dems are only looking at one side, not the other," Trump tweeted Tuesday morning. "Wait until it comes out how horribly & viciously they are treating people, ruining lives for them refusing to lie. Mueller is a conflicted prosecutor gone rogue…."

According to Rudy Giuliani, the president's personal lawyer, the Manafort situation is responsible for Trump's erratic behavior in recent weeks. Giuliani told CNN on Tuesday that the president has "been upset for weeks about what he considers the un-American, horrible treatment of Manafort."