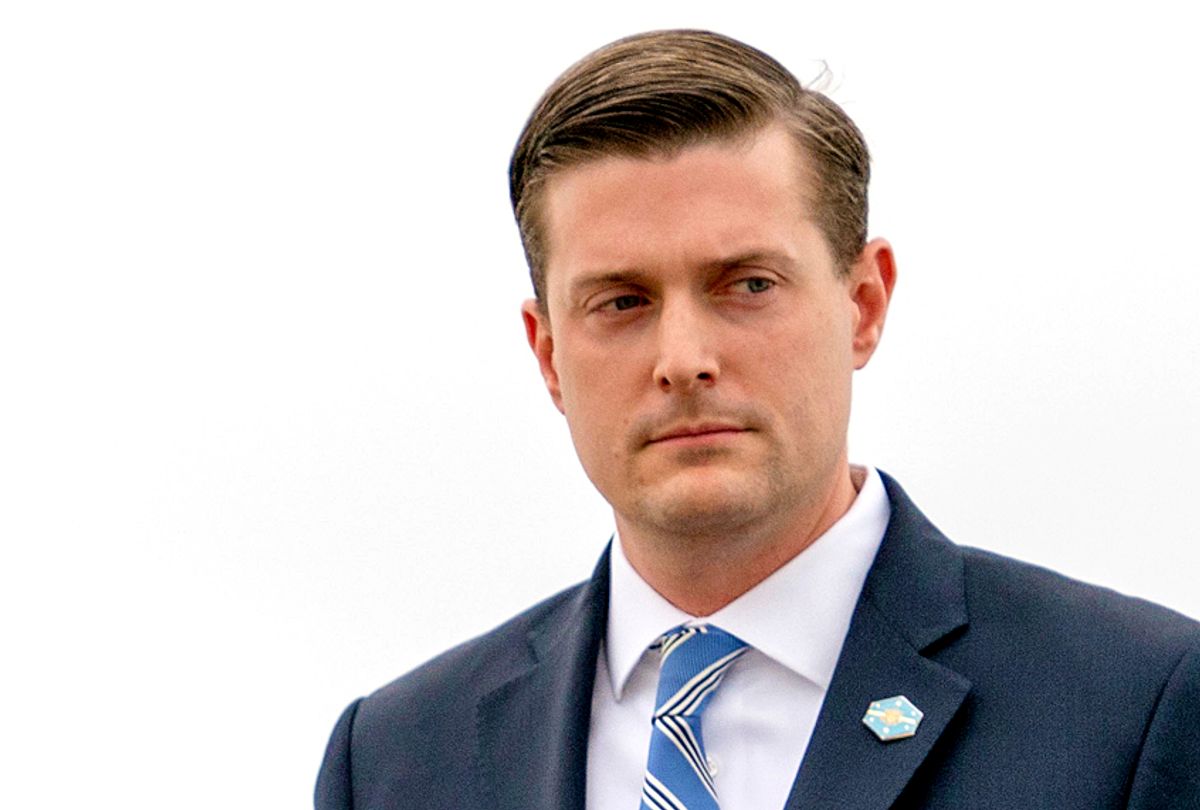 Former White House official Rob Porter reemerged into the political spotlight with an op-ed in The Wall Street Journal in which he praised President Donald Trump's trade policy agenda more than one year after he resigned from his post at the White House in the wake of accusations of domestic violence from two of his former wives.

Porter, who helped manage the president's trade agenda as part of his role as White House staff secretary, wrote in the Journal that Trump has a "series of opportunities to advance the cause of free trade more consequentially than his recent predecessors" – starting by negotiating a deal with China.

"De-escalating tit-for-tat tariffs would encourage markets and help preserve global supply chains," Porter wrote. "Beijing's proposed shopping spree could provide a temporary boost to some American exports such as soybeans and aerospace parts. But it would be shortsighted to settle for discrete purchases to reduce the current bilateral goods imbalance. Absent a change in Americans’ overall saving and consumption patterns, narrowing our export gap with China would only widen our trade deficit with the rest of the world."

Porter said Trump "can inaugurate a new era of U.S.-led trade liberalization" as long as his administration focuses on "strengthening rather than undermining" trade institutions and agreements.

"Having disrupted the global economic status quo, Mr. Trump is now well-positioned to make good on his overarching commitment to help 'restore integrity to the trading system,'" he wrote.

Porter left his post one day after multiple media outlets detailed the allegations of two of his former wives last February. His first wife, Colbie Holderness, released pictures of herself with a black eye that she alleges Porter gave her by punching her in the face. Porter's second wife, Jennifer Willoughby, claimed she filed for an emergency protective order against him. Porter denied the allegations.

The accusations surrounding Porter sparked several scandals in 1600 Pennsylvania Avenue, as senior administration officials came under intense scrutiny for their handling of the abuse allegations after it was revealed that they knew about accusations against Porter for months yet allowed him to remain in the administration. Porter's ex-wives said they were interviewed by the FBI while Porter's background check was ongoing, revealing to law enforcement officers that Porter had been violent during their marriages. That information allegedly traveled up the chain to then-Chief of Staff John Kelly, who reportedly dismissed the red flags.

But the White House's security clearance process has recently faced backlash again after it was revealed that Trump overruled career officials and granted security clearances to administration officials on or about 30 occasions despite recommendations from White House security specialists. That list reportedly includes Ivanka Trump, the president's eldest daughter and senior adviser, and Jared Kushner, his son-in-law and senior adviser.