Leftists were called paranoid for seeing the OK sign as a coded white nationalist signal. Turns out they were right 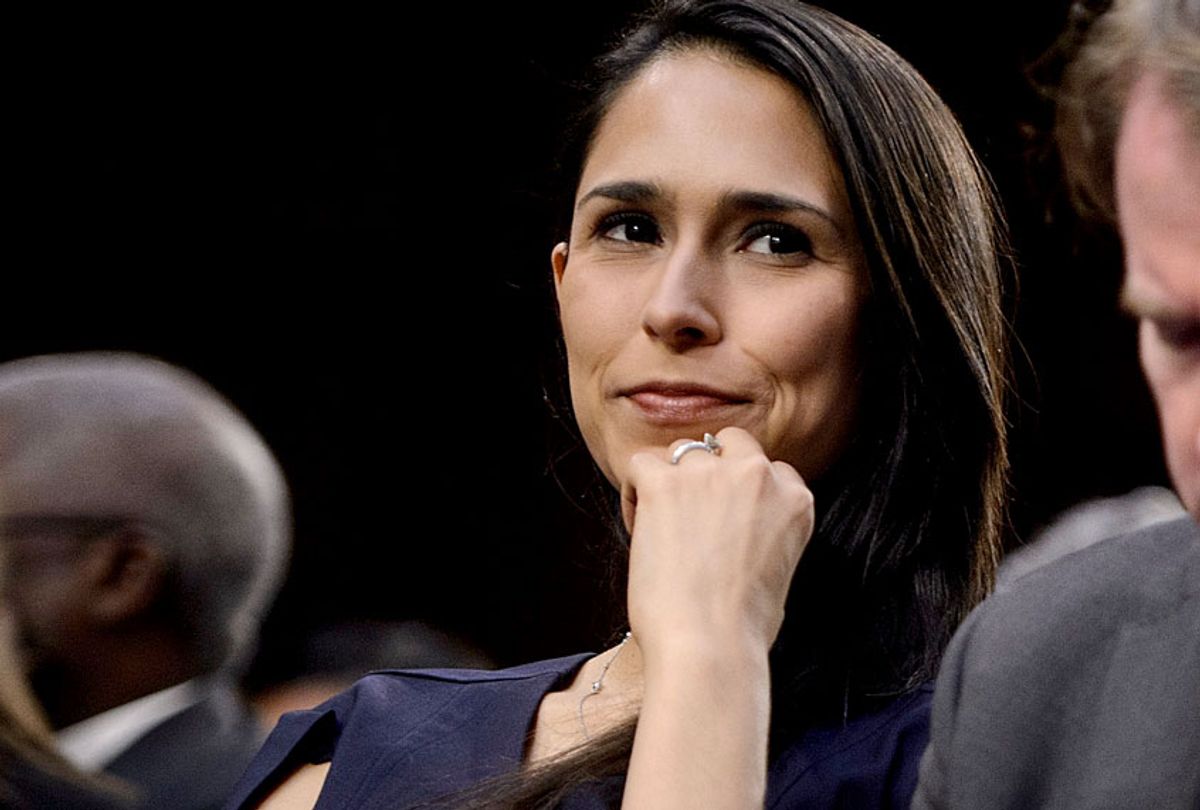 Zina Bash listens during the hearing of the Senate Judiciary Committee on the nomination of Brett Kavanaugh to the US Supreme Court September 4, 2018 in Washington, DC. (Getty/Brendan Smialowski)
--

It might seem like a lifetime ago in today's political climate, but it was only six months ago that Zina Bash, a Republican operative who was sitting behind Judge Brett Kavanaugh during his Supreme Court confirmation hearings last September, flashed a white nationalist hand gesture. It was during the latter half of the week of Kavanaugh's hearing when Bash, with deliberation, looked directly at the camera, lifted her hand, and made the "OK" symbol — which white supremacists had been using as an identifier for more than a year at that point.

Most of the media, of course, did not report the moment that way. Instead, the dominant line of thinking was that Bash was making a joke -- a troll meant to prank liberals, and nothing more.

Earlier that week, a number of people from the fiercely anti-Trump corners of Twitter had taken screenshots of Bash resting her hand on her arm in what appeared to be the "OK" sign, and accused her of trying to subtly signal solidarity to white supremacists who were watching. The response from conservatives and many mainstream journalists was widespread accusations of paranoia. So the next day, Bash reacted to the criticism by deliberately and unmistakably flashing the sign.

One way to read that was that Bash was removing all doubt. But what most journalists chose to believe instead was that she was just kidding around. With white nationalism, like people who kid around do.

"No, a former Kavanaugh clerk didn't flash a 'white power sign'," read the headline at Vox, with reporter Dylan Matthews noting that Bash's husband denied that's what she was doing. Matthews also implied that the association of the "OK" sign with white supremacists was "a prank" to lure leftists into claiming that "an innocuous hand gesture was a secret sign of deep, racist evil," and thereby making them sound crazy.

The Anti-Defamation League declared the episode a "hoax" perpetuated by 4chan and other online trolls to bait liberals into acting stupid. Like Vox, most media outlets left it at that, mocking snowflake leftists for being taken in by this "hoax."

Six months later, a white nationalist from Australia shot up two mosques in New Zealand, killing  50 people. When he appeared in court after the shooting on Saturday, the alleged killer, Brenton Tarrant, flashed the OK symbol at the cameras.

This time, however, the media reports did not frame the OK gesture as a "prank" or a "hoax." Vox, for instance -- yes, the same publication that expended significant energy on framing the gesture as an innocuous gag, simply reported that it was "a white power sign."

Racism is no longer "ironic" when the racists are murdering people. It's not just "trolling" when you shoot dozens of people in the head.

The fact that Brenton Tarrant is likely a mass murderer doesn't mean he's not a troll, however. He is both. He livestreamed his killing spree and posted an online manifesto that is stuffed full of alt-right memes and inside jokes, making it quite clear that one of his main goals in murdering all those people was, in internet parlance, "the lulz." Messing with the libs is what trolls like Tarrant live for, and it turns out that nothing messes with people's heads quite like mass murder.

The fascist strategy works this way: You "shroud your sincere ideas in cartoon characters and memes and then, when called out, you mock your accuser for  being a clueless normie who isn't in on the joke," as vlogger Natalie Wynn explained in her indispensable video "Decrypting the Alt-Right," released after the Charlottesville riot in 2017.

"They benefit from the confusion and the appearance that the left is paranoid," Wynn noted, adding that it's not entirely untrue that the left is paranoid. "Paranoia and self-doubt and questioning of your own is the psychological consequence of being constantly gas-lit by fascists pretending not to be fascists and communicating in code. And it's an intentional consequence."

Punking journalists by tricking them into denying that the OK symbol is a white nationalist signal is also part of the troll. It's important to remember here that white nationalists hate both the progressives who are calling them out and the mainstream journalists who are so defensively eager to call progressives paranoid. So the trolls take pleasure in creating conflicts over apparently trivial issues like the OK sign, which can cause both groups to look a little foolish.

As I noted on Twitter during the controversy over Bash's behavior at the Kavanaugh hearings, "Part of the problem is that if, hypothetically, someone flashed white supremacist symbols at the camera, the point of the stunt would be to get liberals wound up, so they can then claim that liberals are just imagining things."

"That was what the OK symbol was literally invented to do: Both serve at a white supremacist symbol and also one that is just ordinary-enough looking that when liberals expressed outrage, the white supremacist could play the victim of liberal hysteria," I added in a follow-up tweet.

The seriousness of this situation means there is no pleasure in being able to say, "I told you so." At least Tarrant flashing the OK symbol in court removes all the delicious-to-the-alt-right ambiguity around the gesture that made it such an effective troll. If some Republican official did that again, like Bash did in September, it's not likely we would see a bunch of condescending articles accusing the left of being paranoid for seeing white nationalist intent in it.

Instead, the far right and their sympathizers in mainstream politics will move on. They'll surely some other way to troll progressives into launching accusations of white nationalist sympathies, so they can yet again respond by acting huffy and offended. Journalists will once again be stuck between the two, fearful of admitting that progressives might have a point, lest they also be deemed paranoid and hypersensitive.

Donald Trump seems to be playing this game with the New Zealand shooting already. Hours after the mass murder, he made comments suggesting sympathy with Tarrant's views, characterizing immigration from Latin America as an "invasion" and claiming that the country is "bursting at the seams" with new arrivals, in language that echoed Tarrant's white nationalist manifesto and the online forums from which he sprung.

But as soon as progressives objected, Trump and his administration of course played innocent, pointing to his rote condemnations of violence and claiming it was "outrageous to even make that connection between this deranged individual that committed this evil crime [and] the president."

"The Fake News Media is working overtime to blame me for the horrible attack in New Zealand," Trump whined on Twitter, while eliding the fact that the shooter himself credited our president as "a symbol of renewed white identity and common purpose."

There are two possibilities here. One is that the Trump is acting with deliberation, both in signaling support for white nationalist terrorism and in gaslighting the left by denying that he's doing what he's doing. The other is that he's a dotty old bigot who is too self-absorbed to realize  that his use of terms like "invasion" is taken as justification for violence from white nationalists, and that his administration is covering for him because they are too power-hungry to care about the violent consequences.

Considering that Trump had been told, time and again, that his racist language emboldens terrorists, it's hard to imagine that he's acting out of ignorance instead of malice. But there's no way to be sure, so to avoid being perceived as paranoid, journalists must give Trump the benefit of the doubt that he may be too stupid or ignorant to understand that characterizing immigrants as a subhuman invading army is basically inviting people to murder them.

This is why, even though the era of the OK sign as a troll may be over, the larger dynamic behind it is still in effect. Public figures will make gestures of sympathy with white nationalism and then deny that's what they're doing. Journalists, unable to read their thoughts and prove they're lying, are stuck over and over again having to write, "Well, there's no way to know for certain."

Perhaps after this debacle folks in mainstream media will be a little less quick to mock leftists for believing that people on the right are using symbols and other coded gestures to signal their sympathy for a toxic and hateful cause. Remember that famous quote from novelist Joseph Heller: "Just because you're paranoid doesn't mean they aren't after you."