Elizabeth Holmes' all-American scam: HBO's "The Inventor" reveals the science of the con 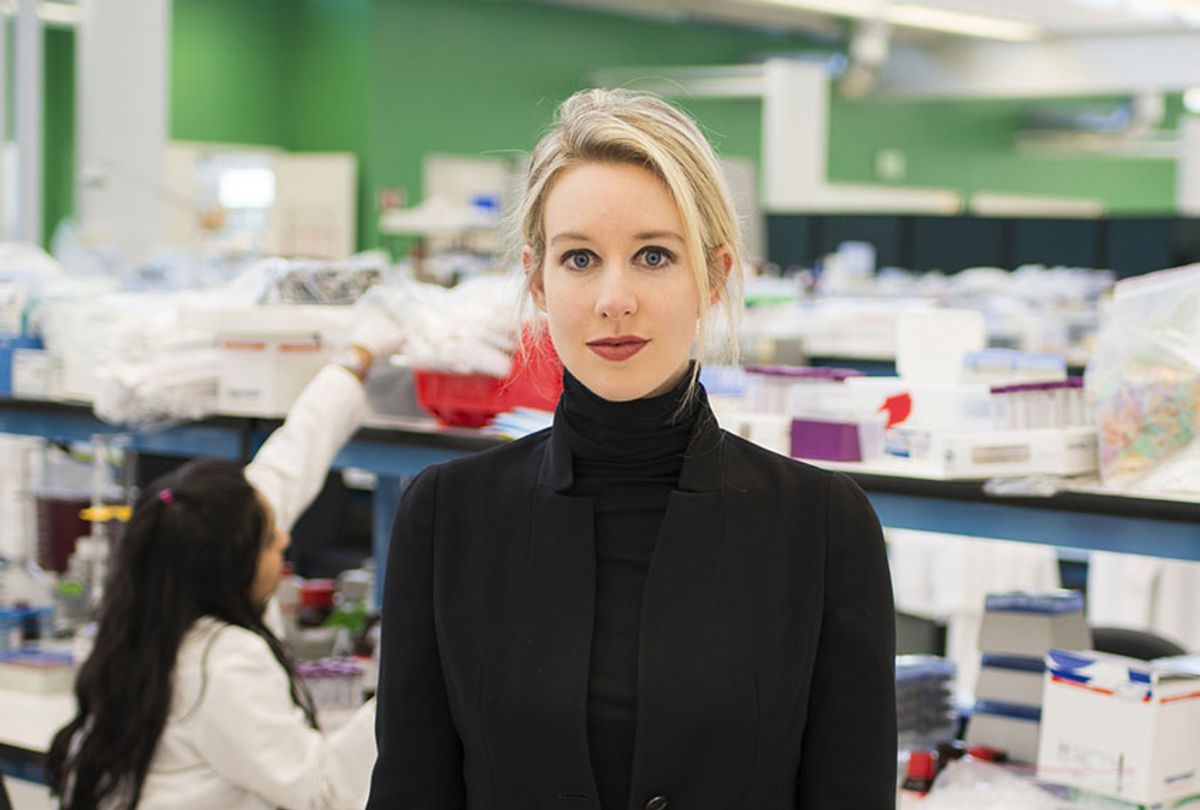 Elizabeth Holmes in "The Inventor: Out for Blood in Silicon Valley" (Courtesy of HBO)
--

Look at me, the con artist says. Watch closely so you can see everything I’m doing. We can’t, of course, because we’re not meant to. Yet we fall for frauds because we so want what they promise to be true: easy money, better solutions, painlessness and efficiency.

Elizabeth Holmes, the woman at the center of the Theranos scandal and the central subject of “The Inventor: Out for Blood in Silicon Valley,” dangled all of these offers in front of the world using showy language, a moving personal story and the appearance of expertise and vision. She parlayed her youth, her intellect, her unwavering commitment to success and her connections to raise hundreds of millions of dollars in venture capital out of air.

By the time she had scammed powerful politicians, wealthy media magnates and an entire drug store chain, she’d amassed enough money to become, for a short time, the world’s youngest self-made billionaire. As in truly self-made, not Kylie Jenner self-made. Holmes did not benefit from the cushion of fame or industry wealth. What she had was a story.

Holmes dropped out of Stanford at 19 and as she charged into the field of biotech, she styled her approach after other great visionaries, such as Steve Jobs and Thomas Edison. She said all the right things and projected the right image. At the height of her company’s fortune, it was valued at $9 billion.

If only that estimated worth was based on a product that actually worked.

“The Inventor,” debuting Monday at 9 p.m. on HBO, is but the latest examination of massive fraud to draw the public’s attention and fascination. We’re still reeling over the college bribery scandal currently dominating the headlines, which broke only a few months after Hulu’s and Netflix’s separate looks at the Fyre Fest long con became top gossip at the water cooler.

One stops short of characterizing these as a sub-trend of our collective true crime obsession, if only because a trend implies that a subject goes out of style. Several of the crown jewels in the filmography of “Inventor” director and producer Alex Gibney were mined from scams, including 2005’s “Enron: The Smartest Guys in the Room”; 2013’s “The Armstrong Lie” (referring to Lance Armstrong, who else); and 2015’s “Going Clear: Scientology and the Prison of Belief.”

In America, we accept scams to be a feature of living in our society as opposed to the occasional bug. The bolder the swindle, the more likely some of us are to buy in regardless of its impossibility, potential damage or its utter silliness. Where would we be without the unwavering confidence of dreamers and their visions?

Mexico was never going to pay for that wall, but millions elected the fraudster making that false promise largely due to the confidence in his delivery. Supermodels were never going to party down with members of the great unwashed on an island in the middle of nowhere, regardless of what a stylish website promised. Yet tens of people were willing to part with thousands of dollars based on that illusion.

And Holmes’ company Theranos was never going to revolutionize blood testing by marrying phlebotomy with nanotechnology. This is not to imply such a thing is impossible, rather that her company couldn’t do it even though she insisted she had. And so many people wanted to believe so very badly that she had, including George Shultz, James Mattis and Henry Kissinger, who sat on her board of directors.

With “The Inventor” Gibney gives viewers an aesthetically appealing view into the story behind Holmes’ rise and fall as an object lesson in deception and hubris masked in humility, assisting us in understanding the science of the con, if not the flaws in the science.

Ultimately that’s not the most important part of the lesson, anyway. What “The Inventor” shows is how susceptible society is to grifts particularly in the realm of technology, a factor that extends back to through the ages to famed inventor Thomas Edison.

Near the beginning of “The Inventor” the narrator explains that Edison himself lied on his way to innovating the light bulb, which he could do in a pre-video, pre-Internet, pre-high tech era. Holmes seductively code-named the machine that promised to provide low-cost, early detection of diseases and infections with a drop of blood The Edison, and preached about her adherence to Edison’s maxim of failing 10,000 times in order to succeed in one’s vision.

The channeling of a legend, the carefully verbalized string of careless lies, the visual signifier of the tech-genius all-black outfit — these are powerful tools in the wielding of power and charisma, the pairing of which provides the fuel for tech innovation.

“There is this idea in Silicon Valley where you, in a very brave way, put the post somewhere really far that you truly have no idea if you can get there,” observes Dan Ariely, a behavioral economist who serves as one of the many voices injecting a sense of humanity into a film that, at times, feels intentionally sterile.

Central to Gibney’s presentation of “The Inventor” are tight shots on Holmes’ wide blue eyes and slight, ever-present upturn of her lips, an expression that hints at a smile but, one infers, is part of the image that coaxed investors into trusting her.

“My first impression was that she didn’t blink,” observes Cheryl Gafner, a receptionist at Theranos. “And so I always wanted to make sure to keep great eye contact, because I didn’t want to be the one who looked away.”

By the time Gafner makes this observation, however, Gibney has already shown what is likely Holmes’ most substantial tell. In a segment of her being filmed featured early in “The Inventor,” a producer off-screen playfully asks, “Can you tell us a secret?” Until that moment, Holmes looks into the lens, and the observer, straight on while delivering her answers expediently and with certainty.

Upon hearing that question, she goes silent and her gaze lowers. “I don’t have many secrets,” she says quietly.

Along with her personal stories, Holmes’ liberal incorporation of technical phraseology into her speeches and pep talks, and her stated ambition to do good in the world, it’s easy to see why a number of demonstratively intelligent people tuned out their inner skeptics and defaulted to pure belief in her fraud.

Perhaps owing to the nature of her deception, the thrill one might have taken in watching the brazenness of Fyre Festival Founder Billy McFarland’s flim-flammery does not exist in “The Inventor” due to the potential harm Holmes’ fraud could have done to ordinary people.

“If people are testing themselves for syphilis using Theranos,” research engineer Tyler Shultz says at one point, “there’s going to be a lot more syphilis in this world.“

What “The Inventor” does effectively, however, is remind viewers to reconsider our portrait of scammers. Not all of them are cheap hustlers sitting at tables at subway stops or in parks, offering you a shot a being the first person ever to win at three-card monte or the shell game. The most dangerous wear the uniforms of greatness and trick you into giving your trust and good sense away. Gibney urges us to look Holmes in the eyes for two hours. Chillingly this only makes a person better understand why her lies passed numerous stages of testing.