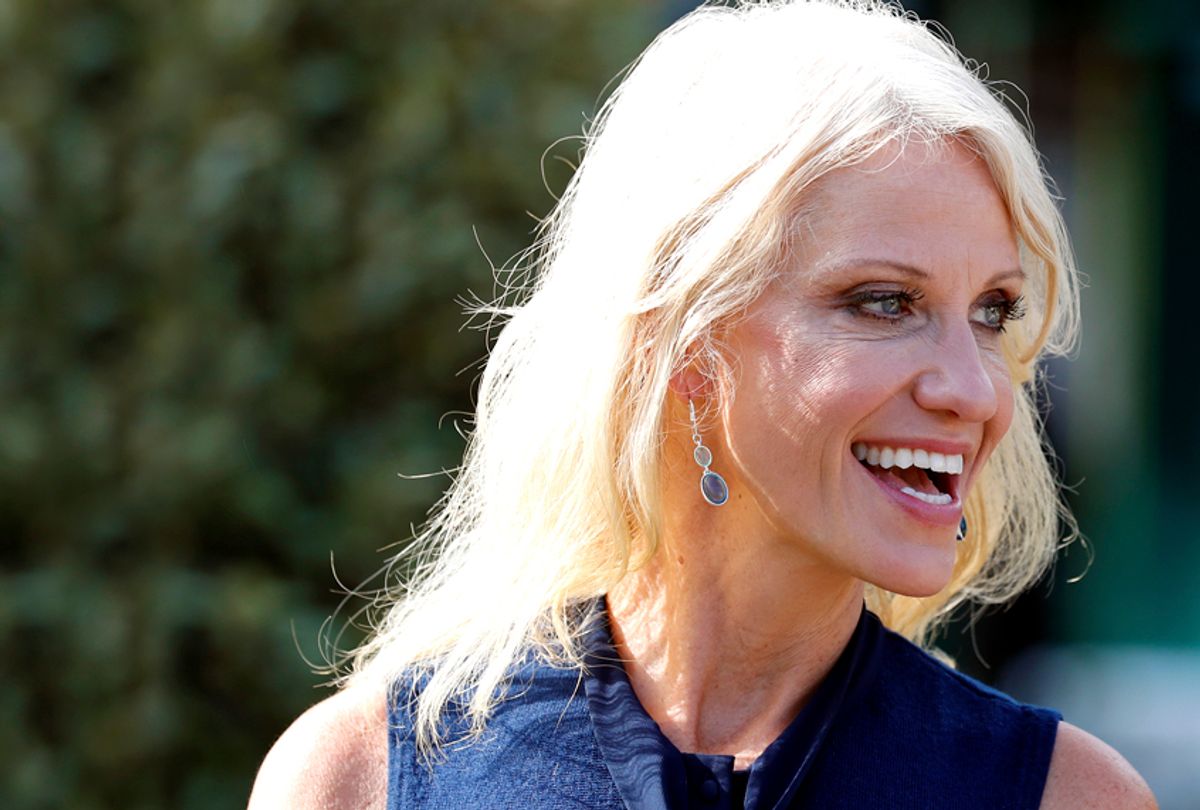 Although President Donald Trump posted, on Friday, a tweet condemning the anti-Islam terrorist attack in Christchurch, New Zealand (which has resulted in 50 deaths so far), some of his critics have noted that one of the suspects published a 74-page manifesto that described Trump as “a symbol of renewed white identity and common purpose.” But Trump advisor Kellyanne Conway, during a Monday morning appearance on Fox News’ “Fox and Friends,” vehemently denied that Trump was an inspiration for the shooter in any way.

While Conway was addressing “Fox and Friends” co-host Steve Doocy and others, a headline ran across the bottom of the screen saying, “Media, Dems, blame Trump in wake of NZ attacks.” And Conway told the Fox News panel, “This president condemns hate and evil and bigotry, and we will continue to do so. People should feel safe in their places of worship, and we’ve seen far too often where that is not the case.”

Conway went out of her way to distance the New Zealand shooter from Trump’s beliefs, asserting that according to the manifesto, the shooter is “not a conservative” and “referred to himself as an eco-naturalist or an eco-fascist.”

During her March 18 “Fox and Friends” appearance, Conway also claimed that when Rep. Steve Scalise was shot by gunman James T. Hodgkinson in Arlington, Virginia in June 2017, Republicans didn’t blame liberals for the attack. Conway claimed, “We didn’t go around saying, ‘Gee, the guy said he watches MSNBC’ or ‘He’s a Bernie supporter.’ Nobody should do that.”

But in fact, Conway herself blamed liberals in June 2017 for Hodgkinson’s shooting spree, telling “Fox and Friends” that “as Steve Scalise was fighting for his life and crawling into right field in a trail of blood, you should go back and see what people were saying about the president and the Republicans at that very moment…. If I were shot and killed tomorrow, half of Twitter would explode in applause and excitement…. You can’t attack people personally, in a way, and think that tragedies like this won’t happen.”

Conway’s vigorous defense of Trump on Monday morning came around the time her husband, conservative attorney George Conway, was criticizing Trump for all the ranting he did on Twitter over the weekend. The attorney, describing Trump as a narcissist, tweeted, “Don’t assume that the things he says and does are part of a rational plan or strategy, because they seldom are. Consider them as a product of his pathologies.”

The Conways have had many disagreements on the merits of Trump’s presidency. While George Conway has been a frequent critic of the president on the right, his wife is among Trump’s most vocal defenders.