Three people shot dead on a tram in the Dutch city of Utrecht; police hunt suspect believed to be Turkish 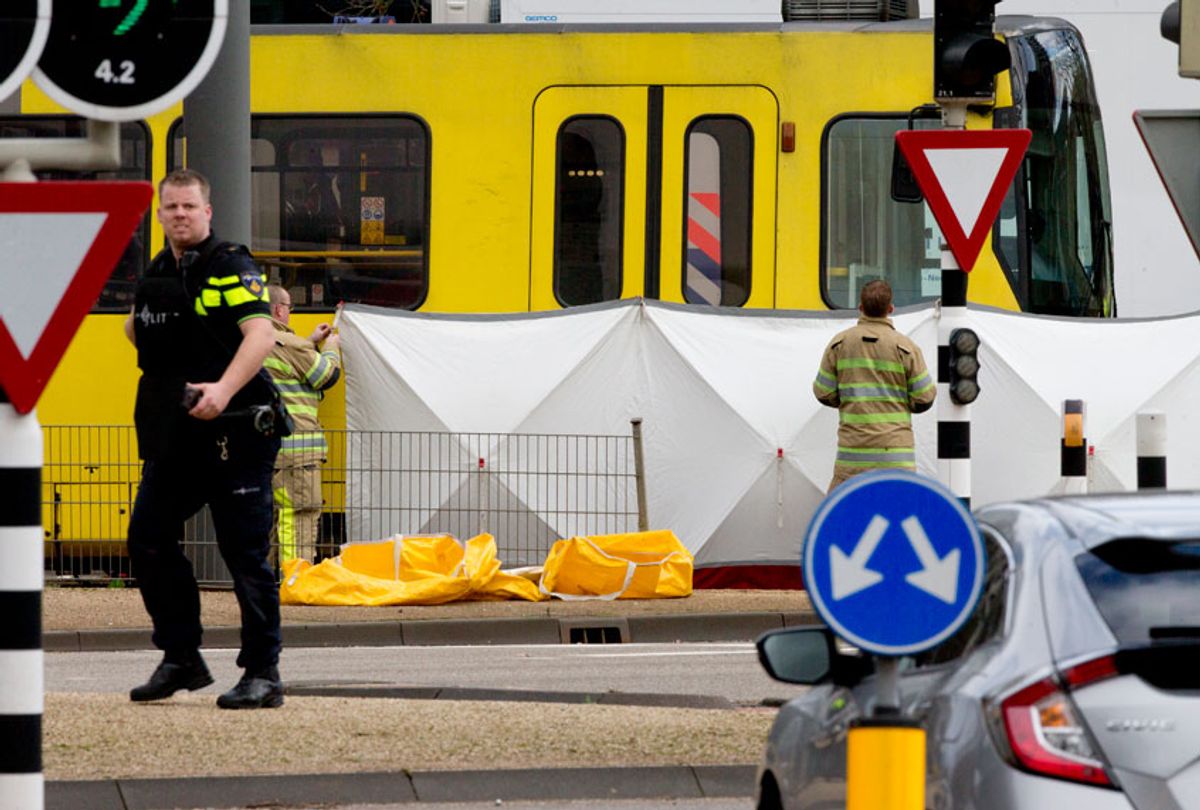 Rescue workers install a screen on the spot where a body was covered with a white blanket following a shooting in Utrecht, Netherlands, Monday, March 18, 2019. (AP/Peter Dejong)
--

A shooting on a tram in the Dutch city of Utrecht has left three people dead and nine injured, with law enforcement officials attempting to locate the suspected perpetrator and ascertain whether the violence was linked to terrorism.

Police are currently looking for a 37-year-old Turkish man named Gökmen Tanis, according to the BBC. It is not clear whether Tanis has any known connections to extremist ideology, but reports have described him as "previously known to police." He reportedly has a "varied criminal record" that includes an attempted manslaughter charge in 2013 and a rape allegation in 2017.

Tanis is believed to have committed his shootings at "several locations," although law enforcement did not specify where those locations were. Dutch anti-terrorism coordinator Pieter-Jaap Aalbersberg told a news conference on Monday afternoon that authorities "cannot exclude a terrorist motive," adding that "a lot is still unclear at this point and local authorities are working hard to establish all the facts." Aalbersberg also said the threat level in the Utrecht Province has been raised to 5, the highest possible status in the country.

Paramilitary police have been sent to airports and mosques due to increased security concerns. Dutch Prime Minister Mark Rutte told reporters that he is taking the incident seriously, describing it as "deeply disturbing" and proclaiming that it is "an act of terror" and an "attack on our civilization [and] on our tolerant and open society."

The mayor of Utrecht, Jan van Zanen, told reporters, "We are working on the assumption of a terrorist motive. We think there is just one perpetrator, but we cannot exclude the possibly of there being several perpetrators," according to the New York Times. Mosques in Utrecht were ordered to be evacuated.

One witness, Jimmy de Koster, told a local television station that he heard gunfire in the square and saw a young woman who seemed to have been wounded lying on the ground.

"Four men walked very fast toward her and tried to drag her away," de Koster reported, before adding that the men left after more shots were fired.

Police released a photograph of the suspect on Twitter with a warning that individuals who see him should contact them and not approach the man themselves, according to CNN. Although the shooting has ended, three rescue helicopters are at the cordoned-off scene to "monitor" the situation, police spokesman Joost Lanshage told the press.

One individual who witnessed the shooting from his office, Vincent van Roon, told CNN that "I was there at the moment of the shooting. I'm in a building next to the tram. I heard the shooting and people came into the building, hiding." He added that he observed as a number of police officers and medical personnel worked on one wounded individual in the street "for a long time."