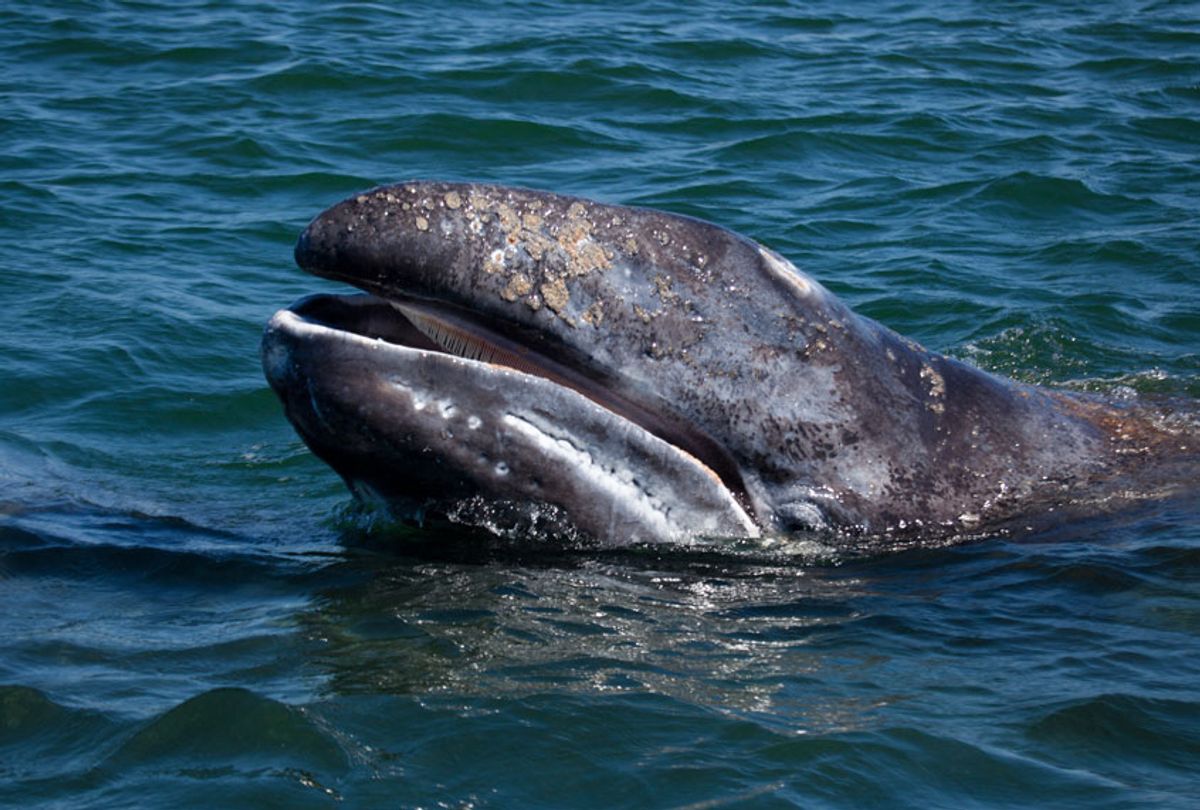 Last week, two stranded gray whales were found in the San Francisco Bay. The stranding is one of a few strange occurrences that are raising concerns among scientists during this year’s northbound migration season.

Marine biologists confirmed the first whale was a one-year-old female who was 23 feet long. A lack of blubber and body fat in addition to little content in her stomach indicated the cause of death was malnutrition. The second whale’s cause of death, who was also identified as a one-year-old 23-foot long female, has yet to be determined since researchers were unable to perform a full necropsy due to the whale’s location near the surfline.

“The gray whale population along the U.S. West Coast is a conservation success story but the species continues to face numerous environmental threats including entanglements, ship strikes and shifting food availability,”  Dr. Padraig Duignan, Chief Research Pathologist at The Marine Mammal Center, said in a statement.

However, the two deaths along with the fact that two whales were in the San Francisco Bay in mid-March indicates a strange shift in gray whale behavior for some scientists. Bill Keener, a marine biologist at Golden Gate Cetacean Research, told Salon the number of gray whales entering the San Francisco Bay has been unusually high this year. Not only have there been more, but they have been arriving earlier, too.

“This year gray whales were first seen in mid-February, and we are talking about multiple whales, like five at a time, and some aren’t leaving,” he said. “I just this morning was just able to identify a whale that has been in the Bay since February 17.”

To put it in perspective, he said, usually two to three gray whales pay a visit to the San Francisco Bay each year while migrating north, and they usually only stay a day or two, he said.  For the unfamiliar, every February groups of gray whales begin their 6,800-mile journey from the lagoons of Baja in Mexico to the Bering Sea. Scientists believe the gray whale migration is the longest made by any mammal on Earth, totaling between 10,000 and 13,600 miles round trip each year. Since gray whales breed in the Baja lagoons, the trip back up north includes more calves.

John Calambokidis, a research biologist at Cascadia Research, a marine mammal non-profit in Washington state, said he has noticed significant changes during this migration season, too.

“We have had some unusual observations up here matching last year providing more evidence that there are nutritional stresses occurring with gray whales,” Calambokidis told Salon. “In particular we have a group of about a dozen whales returning to the northern Puget Sound  to feed, generally they stop here for two to three months, but a number of those have shown up much earlier than normal.”

Calambokidis added researchers in his area have observed at least one gray whale die during this migration season due to malnutrition, too.

“We also have wandering whales that aren’t in good condition and showing up in strange places,” he added, explaining they could be described as emaciated.

While it is too early to know why exactly gray whales are struggling to keep well-nourished during this year's migration, Calambokidis speculated it could be a natural occurrence due to the species population growth.

“As gray whales have recovered it could be possible they are facing the limits of their food supply and are maybe more vulnerable,” Calambokidis said.

Indeed, this is what some scientists concluded caused a high mortality rate in the winter breeding season from December 1998 to spring 1999. In 1999, 283 stranded gray whales were found on the West Coast. Between 1995 and 1998 there were only 41.

For many of the gray whales, feeding occurs almost exclusively during the summer season in the Bering Sea. The food they eat is stored in their blubber for the migration season. While Calambokidis said it is too soon to cast blame on climate change, scientists are aware of the changing ecosystem in the Arctic.

“We are mindful these whales feed in the Arctic and the Arctic has been one of the more vulnerable and rapidly changing parts due to climate change so obviously we are alert to that, but it might be premature to link it,” he said.