The performative bickering of Kellyanne and George Conway: What's the end game?

Are they angling for a TV show when the Trump train finally derails or sputters to an end? 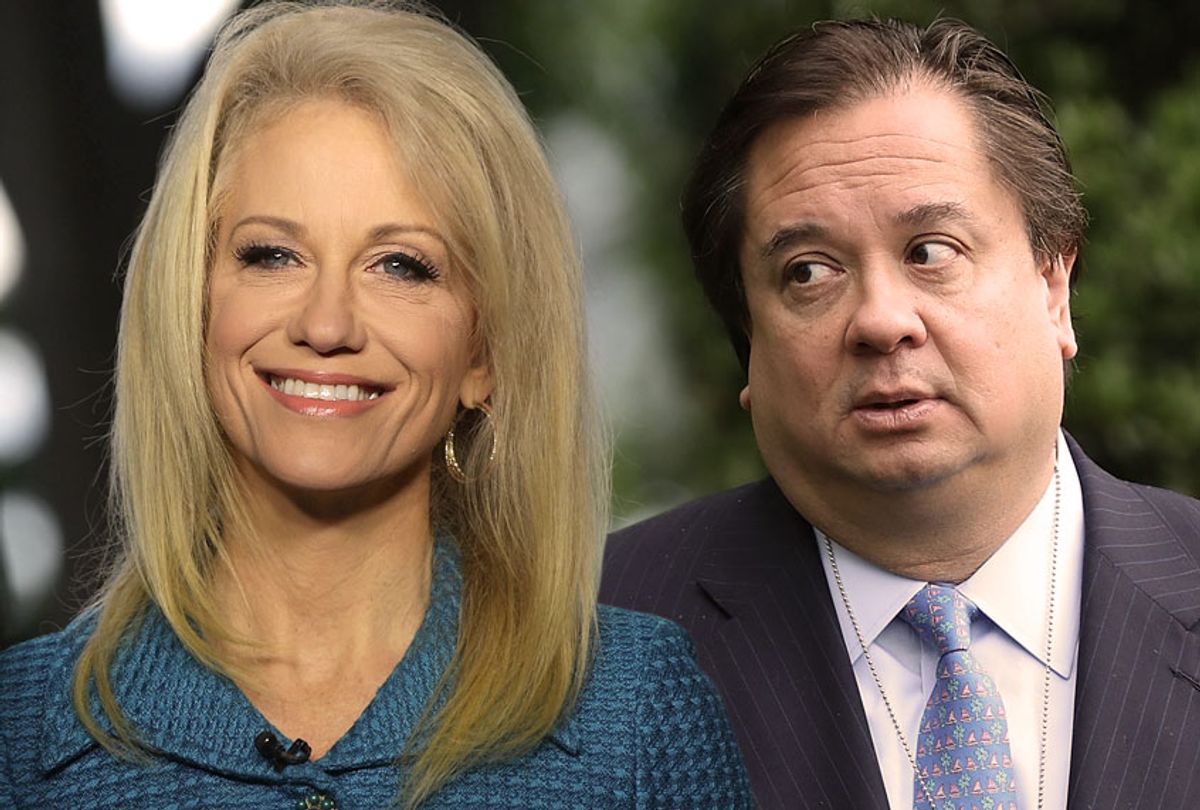 I had been convinced that there was no odder couple than my parents, who've long been separated and whose personalities and livelihoods could not be more divergent, until conservative lawyer turned chronic President Trump critic George Conway began to gain popularity for his fervent and relentless Trump takedowns, on social media and in op-eds, despite the fact that he is married to Kellyanne Conway, one of Trump's closest aides.

The tension hit a boiler point Tuesday when the president weighed in with a typical insult, calling Conway a "total loser" on Twitter. Trump's attempt at a burn capped a deranged long weekend of incessant tweeting from the president, in which he took shots at the late Sen. John McCain, "Saturday Night Live," "the fake news media," Robert Mueller, Joe Biden, and offered a strong defense for Fox News' Jeanine Pirro, whose show was pulled off air after she made despicable Islamaphobic comments about Rep. Ilham Omar.

So it's been a busy few days for the president, but he never misses an opportunity to clap back at his critics with elementary school taunts, even one married to one of his own employees.

But as Trump's Twitter fingers moved at a mile a minute this weekend, George Conway suggested the response was indicative of the president's declining mental state with the succinct assessment, "His condition is getting worse." Conway also retweeted an endless roll of Trump criticisms, many of which remarked on the unusual volume of vitriol coming from the president's Twitter account.

Conway began sprinkling in more of his own commentary on Monday when CNN commentator Ana Navarro-Cárdenas said that the president had tweeted 28 times on Sunday and asked if that meant the Mueller investigation was coming to a close. Conway replied, "Don’t assume that the things he says and does are part of a rational plan or strategy, because they seldom are. Consider them as a product of his pathologies, and they make perfect sense."

While Trump's mental state has been debated and written about extensively, George's perspective is apparently not shared by Kellyanne. The White House counselor told reporters on Monday that she doesn't share those concerns. adding that she hadn't yet seen all of her husband's disparaging tweets. "I have four kids, and I was getting them out of the house this morning to talk to the president about substance, so I may not be up to speed on all of them."

Meanwhile, George continues to bait Trump on Twitter, asking him on Tuesday to comment on which symptoms of narcissistic personality disorder he does not fulfill. And then in a follow-up tweet, Conway wrote, "Once someone understands narcissistic personality disorder, they understand you—and why you’re unfit and incompetent for the esteemed office you temporarily hold."

Conway also retweeted Trump's insult against him, adding that it only hurts Trump's cause.

This public triangulation between Trump and the Conways is not only weird, it's now a frequent dynamic.  Kellyanne has gone on TV several times to publicly defend Trump while George took to Twitter to do the exact opposite. This is not to say that partners are expected to share political ideologies and leanings, but it seems pretty rare that a couple's job titles and goals would not only be in total opposition to each other, but that they would actively undermine each other in public like this.

The Conways have been married since 2001. As the Washington Post reported, "at the Conways’, it’s a house divided. She is Trump’s loyal adviser, the woman who carried him over the finish line to the White House. He is one of the president’s most notable conservative critics and wishes he had never introduced his wife to Trump in the first place."

Trump first addressed the constant criticism coming from George Conway in November after he questioned Trump's installation of Matthew Whitaker as acting attorney general without the senate's approval. "He’s just trying to get publicity for himself," Trump told reporters.

If that's George Conway's goal, it certainly is working. Last summer, Conway wrote a lengthy article in the Washington Post countering Trump on the legality of the Russia investigation, titled "George Conway, lawyer and husband of Kellyanne, rebuts Trump on constitutionality of special counsel." He also filled his timeline retweeting articles that were critical of Trump and has since only escalated his ire.

"Because George is married to Kellyanne, the chief architect and top saleswoman for Trumpism, and because his dissent seemed to come out of nowhere, George went viral," the Post reported. "His retweets were themselves retweeted and topped with bug-eyed emoji. His follower count soared to more than 90,000, and the left adopted this conservative super lawyer as an honorary member of the resistance."

While neither Conway would admit it, it's hard not to wonder if this whole persona is a grift of some kind — a way for George to elevate his profile and formulate a fairly easy exit strategy for his wife, should the Mueller investigation prove damning, or should Trump face impeachment or simply lose his bid for reelection. I can already picture the heartfelt interview with the Conways on Fox News, where they reveal that Kellyanne actually shared George's concerns the whole time. She was just trying to do her job, but George operated as the family's moral compass, they might say. Perhaps the claim would even be floated that the anonymous New York Times warning was penned by Kellyanne.

Kellyanne continues to do her job defending the president, while at the same time giving the appearance of not totally throwing her husband under the bus. "I feel there’s a part of him that thinks I chose Donald Trump over him," she told The Post. "Which is ridiculous. One is my work and one is my marriage."

But she also told the outlet that his tweets border on disrespect toward her, and the coverage framing the differences in their views as antagonistic affects their children. "Nobody knows who I am because of my husband," Kellyanne added. "People know of my husband because of me."

I suppose, like the fate of Trump's presidency, the Conways' end game is remains to be seen. Any plans the would-be power couple may be hatching for post-Trump career moves — a Fox News show? Even CNN? — will stay between Kellyanne and George until she decides to make their move.