Trump's racist delusions and the global threat of white hate

Democracy, security and peace are being endangered by white supremacist hate, while Trump yells about his wall 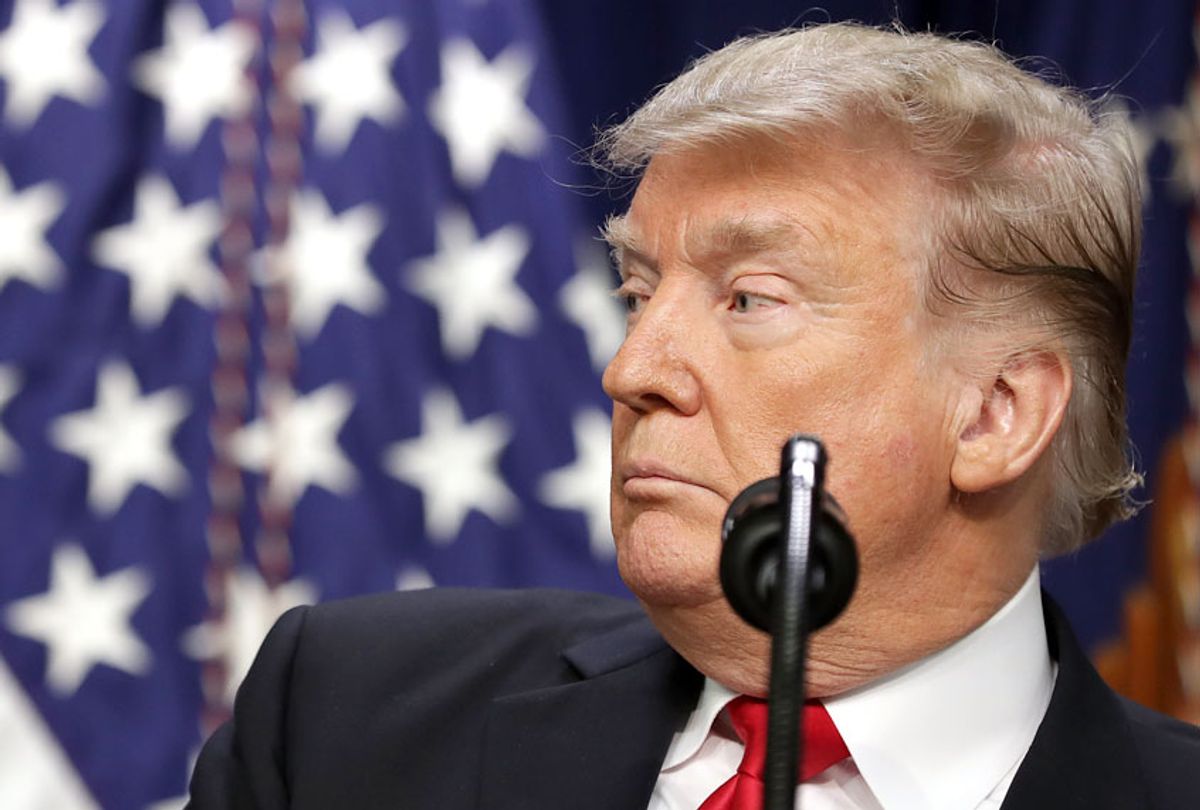 Donald Trump, speaking in a style that boldly combines the last call drunken rant with the megaphone corner rave, recently proved that three pillars of America’s executive governance are stupidity, racism and delusion. While pounding his chest over issuing a veto of Congress’ rebuke of his emergency declaration to build a wall at the Southern border, Trump fielded a question from a journalist about the escalating threat of “white nationalism.” Studies show that terrorist incidents in the United States connected to far-right extremism — with motivations including racism, anti-Muslim, homophobia, anti-Semitism and xenophobia — are on the rise. The question came in response not to any act of violence in the United States, but the gun attacks on two mosques in New Zealand that left 50 dead. The white man arrested for the murders appears to have posted to social media a document filled with xenophobic and anti-Muslim propaganda in advance of the shootings.

“I don’t really,” Trump said with typical eloquence in response to an inquiry into whether or not he believes white nationalism is a growing danger. “I think it’s a small group of people who have very, very serious problems.”

All evidence indicates that the group of antisocial and criminal people who have “very, very serious problems” — on that we can agree with our President — are not so small, and are not any smaller than the Mexican street gang MS-13, with its estimated membership of 10,000, which Trump has denounced often. It is difficult to nail down with great precision the amount of white supremacists in the United States, but the Southern Poverty Law Center reports that there are 1,020 active hate groups across the country. Assuming that each organization has more than ten members, simple arithmetic — which now might fall under the category of “fake news” — demonstrates that the threat of white hate dwarfs that of MS-13, the right wing’s favorite and latest comic book monster.

It is worth remembering that the Ku Klux Klan is the deadliest terrorist network in United States history, and that before the attacks of September 11, 2001, the worst terrorist attack in American history was the Oklahoma City bombing. 168 people died in Oklahoma, all at the hands of Timothy McVeigh, a white supremacist and anti-government extremist.

The mass shooting in New Zealand, along with the 2011 Norway bombing from another white supremacist, shows that, unlike student debt and medical bankruptcy, white hate is not merely an American enterprise. It is a global movement threatening to continually add to its already high body count, and undermine international cooperation and multicultural democracy.

Meanwhile, President Trump, and his overwhelmingly white base of support, are attempting to overthrow the separation of powers in United States governance to build a wall along the Southern border. Trump’s current real estate ambition will address a problem that exists nowhere outside the imagination of white paranoia. In 2017, arrests for illegal border crossings hit a 46-year low; the majority of illegal immigrants in the United States have overstayed their visas, not jumped the border; and multiple studies coalesce to prove that immigrants commit crimes at lower rates than natural born citizens.

If Trump and his supporters were judicious evaluators of evidence, they might demand the deportation of everyone who advocates the white supremacist ideology, at least until we “figure out what the hell is going on,” to use Trump’s erudite justification for his prohibition of Muslim entry in the United States. They might also call for a thorough scrutiny of white applicants for green cards, and maybe they would instruct TSA workers to spend a little extra time questioning and patting down young men with blonde hair and blue eyes.

Racism eliminates rationality. Mexicans and Muslims will continue to suffer vilification, rather than their more dangerous white counterparts, because they look different, and because millions of white people are preconceived to see them as dangerous, even when they are not.

The Kirwan Institute for the Study of Race and Ethnicity at Ohio State University defines “implicit bias” as “the attitudes or stereotypes that affect our understanding, actions, and decisions in an unconscious manner.” “Build that wall!”, more than an insipid, pro-wrestling audience chant, is an admission of implicit bias.

Implicit bias is one of many reasons why white racism constitutes the gravest threat to peace, security and democracy in the entire world. America has already fought two wars due to white supremacy — the Civil War and World War II. A reasonable observer would expect the entire culture to act with obsessive caution, guarding against the mere hint of white hate’s resurgence.

The members of the mainstream media, on cue and off their cue cards, continue to miss the story, even as it confronts them with a sheeted face.

When Senator Sherrod Brown recently called Donald Trump a “racist” on Meet the Press, Chuck Tood, with odd indignation, asked if he could really make that judgment about “what’s in the President’s heart.” As Aristotle taught, virtue is habitual action. A man who habitually does and says racist things is a racist.

The press also plays into the right’s hands by abusively bandying about the word “socialism” to describe progressive policies of universal health care, tuition free public universities, and higher taxation on the wealthy. As the entirety of Western Europe shows, all of these programs fit into a capitalist framework. And yet, the press is bashful about using the word “fascism” to describe the rightward turn of American politics and the leadership of Donald Trump. Even the softer term “authoritarian” typically comes with the qualifier, “impulse” or “instinct.”

Albert Camus wrote that “the State is always criminal in its dreams.” Former Presidents have joked about how they would prefer to have dictatorial powers, and there is not much that citizens can do to censor the dreamlife of a leader. Trump is unique in his overt ambition to redefine American political life. Already working the soil to plant seeds of electoral nullification with his talk of “voter fraud” and “illegals voting for Democrats,” Trump has programmed his supporters into hostility toward the essence of American democracy. According to poll results first published in the Washington Post, 52 percent of Trump voters believe that their emperor should have the power to postpone the 2020 election if he believes that voter fraud is a concern.

Trump also recently told an interviewer that things could get “very, very bad” if his “tough” supporters in the military, police departments, and biker gangs decide to “play it tough.”

Is that what happened when Brenton Tarrant, who cites Trump as an inspiration, opened fire on a mosque in New Zealand? Christopher Paul Hasson, another Trump supporter and white supremacist, attempted to play it tough with his foiled plot to assassinate the most prominent politicians in the Democratic Party.

As the country inches toward another presidential election, Trump and the Republicans will attempt to distract the public from genuine dangers with phony warnings about Mexicans, Muslims and socialists.

It is an old tactic of manipulation. One white nationalist put it this way in the 1990s, “I believe we are turning into a socialist government. The government is continually getting more powerful, and people need to defend themselves against government control.”

That was Timothy McVeigh explaining why he decided to “play it tough.”