Trump's war of words claims real victims: Can we now see this man for who he really is?

Trump has been promising violence from the beginning. Here it is: We have to face it, and face his true nature 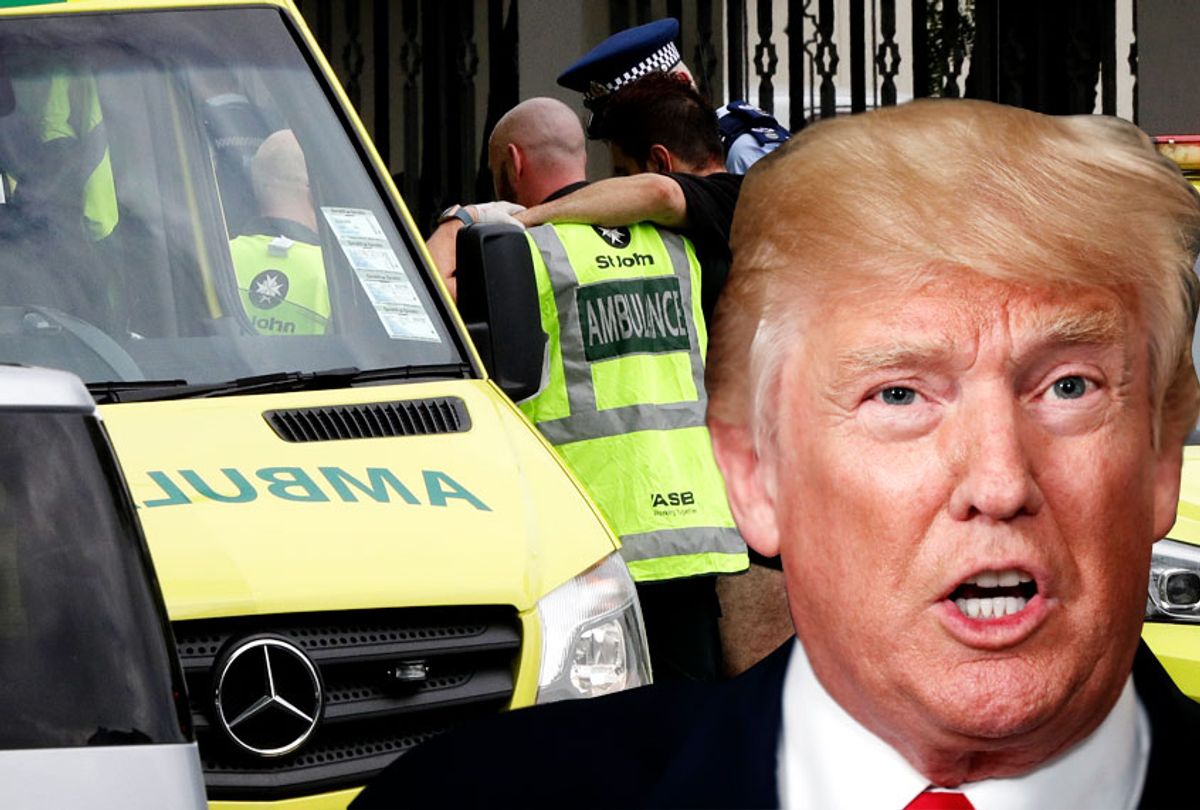 Police and ambulance staff help a wounded man from outside a mosque in central Christchurch, New Zealand, Friday, March 15, 2019. (AP/Salon)
--

Maya Angelou is correct. When a person shows you who they are, you better believe them. They know themselves much better than you do.

Donald Trump is a hero and flag-waver for racists and bigots.

Trump's life mantra is "never apologize." He followed this rule on Sunday. In response to last Friday's terrorist attack by a white supremacist against Muslims in New Zealand -- attacks whose perpetrator claimed Donald Trump as an inspiration -- Trump chose to publicly down on his racism and bigotry.

This began on Friday when Trump, speaking about conditions on the Mexican border told reporters, "People hate the word ‘invasion,’ but that’s what it is."

These words flow from the same political imagination as the manifesto of the alleged mass murderer in Christchurch, New Zealand. That is also the worldview shared by many of Trump's key advisers, past and present, including Stephen Miller, Steve Bannon,  Michael Anton and Sebastian Gorka, as well as a wide swath of Republican voters.

Later in the day Donald Trump minimized and downplayed the threat to the United States and the world represented by white supremacists and other right-wing terrorists, a hive mind of hate that national security experts are now describing as "White ISIS."

On Friday, Trump told reporters, "I think it’s a small group of people that have very, very serious problems." This is not true. The FBI and other law enforcement agencies have described white right-wing domestic terrorism as a greater threat to the United States than radical Islamic terrorism.

Bring back [Judge Jeanine.] The Radical Left Democrats, working closely with their beloved partner, the Fake News Media, is using every trick in the book to SILENCE a majority of our Country. They have all out campaigns against Fox News hosts who are doing too well. must stay strong and fight back with vigor. Stop working soooo hard on being politically correct, which will only bring you down, and continue to fight for our Country. The losers all want what you have, don’t give it to them. Be strong & prosper, be weak & die! Be true to the people that got you there. Keep fighting for Tucker, and fight hard for [Pirro]. Your competitors are jealous — they all want what you’ve got — NUMBER ONE. Don’t hand it to them on a silver platter. They can’t beat you, you can only beat yourselves!

This was more than cheerleading for two of his favorite Fox News propagandists. Trump's Sunday Twitter broadside actually fits into a much larger pattern of menace and violence.

Bernard Harcourt, a professor of law and political science at Columbia University, locates these new comments by Donald Trump in a broader context in an essay published last November by the New York Review of Books:

President Trump makes constant use of the language and logic of the “new right,” a toxic blend of antebellum white supremacy, twentieth-century fascism, European far-right movements of the 1970s, and today’s self-identified “alt-right.” And his words and deeds have empowered and enabled an upsurge of white nationalists and extremist organizations — from Atomwaffen to the Proud Boys to the Rise Above Movement — that threatens to push the country into violent social conflict.

Amplified by social media, this new right rhetoric is inciting unstable men to violence through pipe-bomb mailings and temple shootings. It is crucial for the American people to identify and oppose this radicalization, in order to steer the country back to a steadier path. ...

Everything about Trump’s discourse — the words he uses, the things he is willing to say, when he says them, where, how, how many times — is deliberate and intended for consumption by the new right.

The phrase "political correctness," used so often by Trump and his supporters, was first weaponized by influential white supremacist author and strategist William H. Lind.

Lind's version of "political correctness" is a conspiracy theory where "Marxists" seek to brainwash and manipulate (white) people (especially white men) into "surrendering" their supposed interests to nonwhites, gays and lesbians, non-Christians, women, and other "enemy" groups.

Sociologist James Scaminaci III, an expert on the tactics and strategies of the right-wing movement, discussed Lind's theory of "fourth-generation warfare," or 4GW, in a 2016 interview with Salon. This style of war is primarily psychological in character, and intended "to undermine and destroy the legitimacy of the state actor" and to use "psychological warfare techniques to remove affective support from the state actor."

A sub-component of 4GW is William Lind’s conspiracy theory of the internal war for supremacy between what he called “cultural Marxists” and their ideology of “Political Correctness” or “multiculturalism” and the “traditional American culture” or “Judeo-Christian culture.” Lind argued that “cultural Marxists” hate America’s “Judeo-Christian culture” and were seeking to destroy it. The losers were to be rich, white, conservative, Christian, heterosexual men.

This is where religious supremacy and white supremacy link up, and where Trump is attempting to fuse in his own person.

Internally, this clash of cultures is weaponized as propaganda campaigns designed to delegitimize whole classes of peoples:  Blacks and civil rights and voting rights; women and reproductive rights; the LGBTQ and gay rights; workers and labor rights; environmentalists and environmental laws and science.
Outside the country, the clash of civilizations is between Christianity and Islam. ... One can draw a straight line from the anti-Muslim views of ... Lind in the early 1990s to the Islamophobia of today.

Trump's Twitter broadside on Sunday was just the most recent of many obvious and direct threats of political violence made by him against his (and by extension his supporters') "enemies."

Several days before that, Trump (again) threatened violence if he is removed from office, does not win the 2020 presidential election, or his agenda is somehow stopped by the Democratic Party. He told the right-wing website Breitbart:

In his Sunday Twitter proclamation Donald Trump defended Tucker Carlson and Jeanine Pirro because he shares their hateful values.

Carlson has been widely criticized and condemned for the racist, sexist and misogynist comments he made on a morning drive-time radio show between 2006 and 2011, as recently discovered by the watchdog group Media Matters.

Carlson described Iraq as "a crappy place filled with a bunch of, you know, semiliterate primitive monkeys -- that’s why it wasn't worth invading."

Encouraged by this "safe space" for racism and sexism, Carlson summarized his view of human history:

The country's so fucked up on the subject that getting a white man, I mean everyone's embarrassed to be a white man I guess, that's a bad thing.... I don't have a problem with it. I don't really think of the world in those terms but, you know, white men, you know, they've contributed some, I would say... Well, I mean creating civilization and stuff. ...

Carlson professes to believe the ludicrous lie that "white men" created "civilization," which is the central premise and foundation of the white supremacist ideology that motivated one man in New Zealand to kill 50 people last Friday at their houses of worship.

As for Jeanine Pirro, she is under fire for her part in the controversy surrounding Rep. Ilhan Omar. Last week on the latest episode of "Justice With Judge Jeanine," she said: "Omar wears a hijab, which according to the Quran 33:59, tells women to cover so they won’t get molested. Is her adherence to this Islamic doctrine indicative of her adherence to Sharia law, which in itself is antithetical to the United States Constitution?"

This is textbook prejudice and bigotry against Muslims, as well as a willful misreading of the Constitution. Pirro's show has been temporarily suspended by Fox News, which presumably fears another expensive backlash against the network and its advertisers.

As Harcourt warns in his New York Review of Books essay:

We are watching, in real time, a new right discourse come to define the American presidency. The term "alt-right" is too innocuous when the new political formation we face is, in truth, neo-fascist, white-supremacist, ultranationalist, and counterrevolutionary. Too few Americans appear to recognize how extreme President Trump has become — in part because it is so disturbing to encounter the arguments of the American and European new right. But we must — and we must call Trump out for deploying them to gain power. ... Trump is methodically engaging in verbal assaults that throw fuel on his political program of closed borders, nativism, social exclusion, and punitive excess.

Donald Trump's presidency has been described as a vacuum of leadership, a deficit and emptiness that is most apparent during times of tragedy and crisis. Such an observation is imprecise. It is true that Donald Trump is a nadir in the history of the American presidency and the country's democracy. However,  his regime is not an emptiness or a void but rather the embodiment of everything wrong with America's political culture, society, collective values and psyche, as well as the personal and moral failings of too many millions of its citizens.