How would the presidential contenders deal with the entrenched U.S. foreign policy elite? 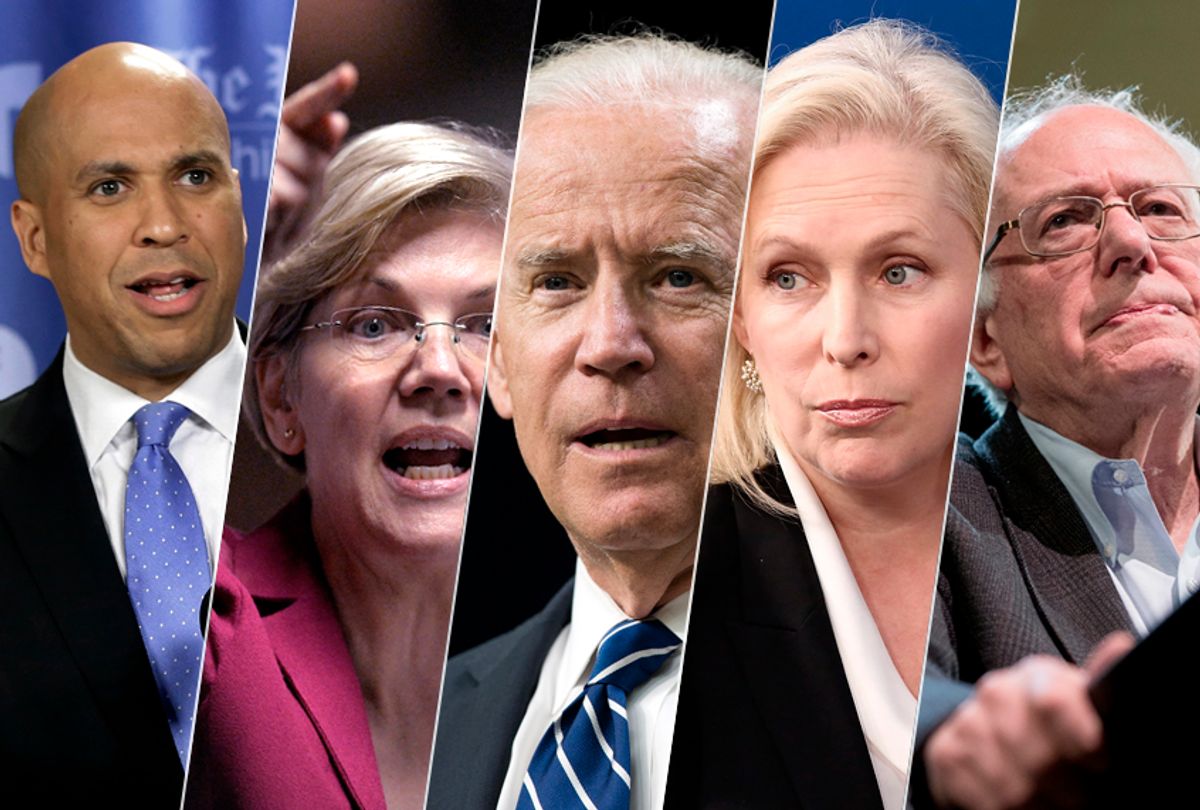 If a Democrat is elected president in November 2020, he or she will have two challenges: one global and one municipal.

The first challenge will be how to run the worldwide $643 billion a year military empire of the United States, which surveils the planet while fighting four undeclared wars. The second challenge is much smaller but still formidable: what to do about “the Blob” in Washington, D.C.

No, this isn’t a science fiction joke. The Blob is the nickname that Ben Rhodes, President Obama’s speechwriter, gave to America’s foreign policymaking elite in a May 2016 interview. According to Rhodes, the Blob included Secretary of State Hillary Clinton, Defense Secretary Robert Gates and other supporters of the 2003 invasion of Iraq.

More generally, Rhodes was referring the coterie of operatives who have made U.S. foreign policy under every president from Truman to Trump. With his unkind epithet, Rhodes suggested these men and women responsible for the U.S. foreign policy record are a shapeless mass lacking a coherent identity yet somehow ominous.

While Rhodes was reviled inside the Beltway, his coinage has stuck. The Blob is useful shorthand for a recognizable and powerful group: the former officials, analysts, diplomats, writers and military officers who espouse orthodox U.S. foreign policy views.

They are not a secret cabal. They work at think tanks and elite universities and consulting firms. They talk to reporters. They opine on cable TV talk shows. And they rotate in and out of government positions. They range from multilateral liberals to hawkish neoconservatives. While they have had deep differences, they have collectively promoted a broadly consistent set of policies that has defined the United States in the world over the last 30 years.

Right now, they favor a hard line on Russia, intervention in Syria and Venezuela, bolstering NATO, and promoting free-trade agreements. They oppose defense spending cuts, rapid denuclearization of the Korean peninsula, and a jobs-driven foreign policy.

At its best, the Blob gave us the Paris climate accord, the Iran nuclear deal, Cuba normalization, the Millennium Challenge to address global poverty, and the now-abandoned treaty on nuclear weapons in Europe.

At its worst, the Blobgave us proxy wars (leading to failed states) in Central America; expansion of NATO (to the fury of Russia); free-trade agreements (which did little for Americans living inside the East and West Coasts); invasion of Iraq (on false pretenses); the (unsuccessful) occupation of Afghanistan; the implementation of a torture regime (and its removal); the furtive implementation of mass surveillance (since abandoned); the illusory “two-state solution” in Israel/Palestine; and unauthorized wars in Libya, Somalia, Niger, and Yemen, the last with catastrophic human consequences.

What should President Sanders (or Warren or Biden or Buttigieg or Gabbard) do upon taking office on January 21, 2021? Should they follow the Obama strategy of implementing incremental course corrections in the trajectory of current policies? Or force a fundamental change of direction on issues of war and peace?

The answer depends, in large part, on how she or he thinks about the Blob.

Trump has marginalized the Blob. He has abandoned the orderly policymaking process they revere. He ignores their briefings. He scorns their expertise. He demonizes their concept of a (neo)liberal world order. Instead, he uses the U.S. foreign policy apparatus for his own ends: to feed the family business, withdraw from land wars, collaborate with like-minded autocrats, stimulate arms sales, demonstrate belligerence, and dominate the news cycle.

The Blob fears Trump, for good reasons and bad ones.

This is the Democrats’ dilemma. Trump’s successor cannot run, much less reorient, America’s global empire without a policymaking elite. Yet the existing elite — the Blob — is wedded to the status quo ante Trump, and adamant in defense of its unimpressive-to-awful record since 9/11.

Exhibit A: Robert Kagan, liberal-minded neoconservative, adviser to both George Bush and Hillary Clinton. He is using the platform of the Washington Post to offer an alternative to Trump’s foreign policy. Since Trump has no use for the Blob, Kagan is appealing to Democrats and post-Trump Republicans to return to the foreign policies of the Clinton-Bush-Obama era. He wants America to face the challenge of the populist authoritarianism.

Kagan doesn’t spend much time defending the Blob’s record on Iraq’s non-existent WMD, torture, mass surveillance, election-meddling, Libya, or Yemen. He doesn’t spend any time addressing what Bernie Sanders and Elizabeth Warren have said about the roots of today’s authoritarianism.

Kagan’s eloquent disquisition on the course of world history ends with the argument that to oppose his policy prescriptions is to oppose democracy itself:

“A broad alliance of strange bedfellows stretching from the far right to self-described ‘realists’ to the progressive left wants the United States to abandon resistance to rising authoritarian power. They would grant Russia and China the spheres of influence they demand in Europe, Asia and elsewhere. They would acquiesce in the world’s new ideological ‘diversity.’ And they would consign the democracies living in the shadow of the authoritarian great powers to their hegemonic control.”

One could describe the same reality by saying the repeated failures of the U.S. foreign policy elite—two unsuccessful trillion-dollar wars, the use of torture and mass surveillance, and near-total indifference to the impact of foreign policy on the U.S. economy have generated widespread opposition to the pretensions of the foreign policy elite. It is a “broad alliance” indeed.

The idea that post-Trump U.S. policymakers will act in defense of democracy is belied by the failures of democracy that have occurred on their watch. Kagan’s rhetoric of democracy is about as convincing as when Hillary Clinton tweeted “America is already great.”

The position of the three leading Democratic candidates on the Blob are pretty clear.

Joe Biden, who has not yet announced, was among the most dovish of Obama’s advisers, but he seems comfortable with the national security status quo. He might invite Kagan for an interview but not give him a job.

Bernie Sanders, gruff socialist, is an outsider. Along with his foreign policy adviser Matt Duss, he insists on a fundamental change from Blob policies. Sanders wouldn’t return Kagan’s phone calls.

(See David Klion’s “Who Is Matt Duss, and Can He Take On Washington’s ‘Blob’?” on the Nation.)

Elizabeth Warren, impassioned Harvard professor, is a policymaking insider par excellence (she almost single-handedly created the Consumer Financial Protection Bureau). She too wants to break with the Blob. Warren would return Kagan’s phone call — and tell him to hold her beer.

In short, Biden would most likely embrace the Blob, Sanders would purge it, and Warren would bend it to her will.

Another Democratic aspirant who has signaled their independence from Blob thinking is Rep. Tulsi Gabbard of Hawaii, who served two tours in Iraq as a medical specialist. She is an outspoken anti-interventionist, who has flouted liberal sensibilities with her willingness to take meetings with Indian prime minister Narendra Modi, a Hindu nationalist, and Syrian President Bashar al-Assad, a brutal dictator. She serves on the board of a foreign policy group funded by the Koch Brothers. She’s a Blob-buster.

Beto O’Rourke, the El Paso congressman, has shown an independent streak. According to Jacobin’s Branko Marcetic, O’Rourke “bucked Obama on several important issues, pressuring him to close Guantanamo, supportinglegislation to curtail NSA spying, opposing war in Syria and arming the country’s rebels, and demanding Obama get congressional authorization for his continued war on ISIS.” O’Rourke looks like a Blob skeptic.

Pete Buttigieg, mayor of South Bend, Indiana, served as naval intelligence officer in Afghanistan, but has not focused on foreign policy or national security issues. He did endorse the suggestion of Washington Post columnist Greg Sargent that all Democratic presidential candidates pledge to abide by the War Powers Act. The oft-ignored 1975 law requires the president to get congressional approval for U.S. military action lasting longer than 90 days. That’s the kind of useful reform the Blob would never propose but could probably live with.

The foreign policy views of John Delaney, a Maryland congressman and former businessman, flow from his belief in free trade, long a staple of semi-official Washington thinking. He’s Blob-friendly.

The other declared candidates — Sen. Cory Booker, former HUD secretary Julian Castro, Sen. Kirsten Gillibrand, Sen. Kamala Harris, Senator Amy Klobuchar and entrepreneur Andrew Yang — have said little about issues of war and peace beyond platitudes. What they have (or have not) said about Venezuela indicates they are Blob-friendly.

Of course, the 2020 campaign has just begun, and voters are notoriously uninterested in foreign policy issues, at least until they become issues of war and peace. The candidates have just begun to face questions about how they would administer the American empire after Trump. And those questions begin with: What do you think of the Blob?