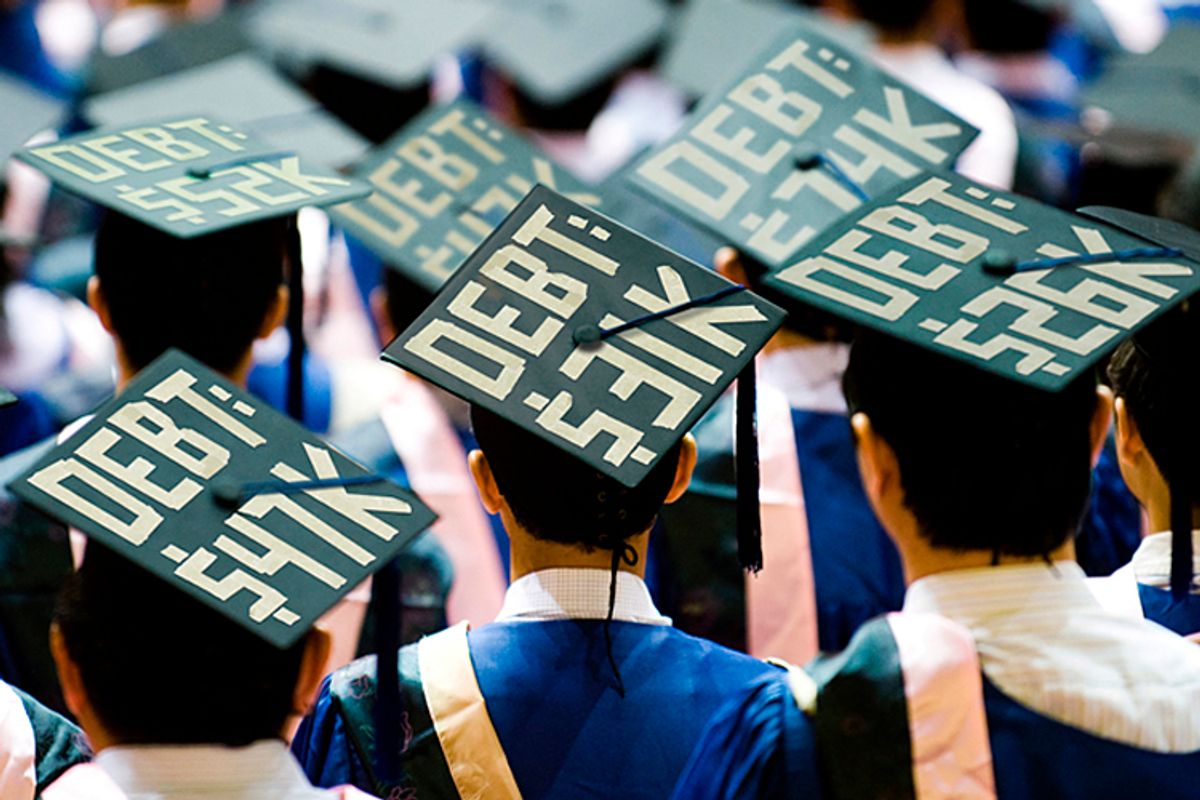 When a student borrows money from the government to go to college and then has serious trouble paying it back, should the college be on the hook to help pay back the government? That question lies at the heart of a proposed idea known as “risk-sharing.”

The idea is currently being considered by President Donald Trump. It has been championed by politicians at both ends of the political spectrum – from retiring Republican Sen. Lamar Alexander to Sen. Elizabeth Warren, a 2020 Democratic presidential hopeful.

Risk-sharing has the potential to improve the outcomes of students from schools, typically for-profit institutions, that fail to help students graduate and find viable careers. However, as a researcher who studies the ethics of debt, I also see significant limitations. One question is whether the money that colleges pay will be used to reduce the debt burden of the struggling borrowers, or whether borrowers will still have to pay the full amount. Another is how it will affect overall debt and its impact on the economy.

What could risk-sharing achieve?

Risk-sharing can take a variety of forms, but common to them all is the idea that colleges and universities should be required to shoulder some of the costs that the federal government now bears when students default on their student loans. Institutions of higher education should, the thought goes, be held partially responsible when borrowers cannot repay.

In the simplest versions, all colleges and universities would be required to pay a penalty when former students default in order to help offset the cost of that default to the government. More complex versions would require that such penalties only be paid after a college’s graduation rate falls below a certain level, or if the student loan repayment rate among former students falls below a certain threshold. There could be a sliding scale, so that lower graduation and repayment rates trigger higher penalties. Some versions would even give bonuses to schools for enrolling needy students and improving completion rates.

If implemented well, risk-sharing could prompt poor-performing schools to work harder to increase graduation and repayment rates. Many colleges and universities have already had great success helping students complete their degrees and find well-paying careers. However, some schools, typically for-profit institutions, have low completion rates, high default rates and low employment rates for former students. These are the schools most likely to be impacted by risk-sharing.

In order for risk-sharing to have a positive effect on student outcomes, it must be carefully targeted to those institutions that fail to take steps to help students graduate and develop viable career paths.

This is essential because completion and default rates vary based on several different factors, such as race, socio-economic status and even gender.

Community colleges and historically black colleges and universities, where the completion rates tend to be lower, might be penalized if risk-sharing fails to include adjustments, such as bonuses to schools that enroll more low-income students.

A simplistic version of risk-sharing might even have the perverse effect of raising tuition because some colleges and universities would likely try to make up the cost of penalties by charging higher tuition. They might also try to avoid enrolling students whom the data suggest are less likely to graduate and repay their loans.

While risk-sharing would shift some of the costs of providing student loans from the government onto colleges and universities, it’s not known whether and how much risk-sharing would lower overall debt levels – or individual debts of borrowers who default – and ultimately lessen the negative impacts of that debt upon borrowers and the economy.

Some economists have suggested that the revenue from risk-sharing be used to give bonuses to institutions that do a good job of serving low-income students. On the other hand, a student advocacy group has recommended that a portion of the revenue be used to provide “much needed and justified borrower relief.” “Students already face the most risk in higher education, so a real ‘risk-sharing’ program should provide students a portion of the benefit created to mitigate that risk,” the group, the Young Invincibles, has argued.

Some estimates predict modest increases in completion rates and modest reductions in debt for students at the worst-performing schools. These gains would be concentrated within the approximately 10 percent of students enrolled at for-profit institutions.

Because risk-sharing targets poor-performing schools, it is unlikely to significantly affect the outcomes of students at schools that already have strong completion and repayment rates relative to the students they serve. But even if some student outcomes at those schools do improve, tuition is also likely to go up.

Total student debt has tripled since 2006 and now stands in excess of US$1.5 trillion. A record 69 percent of 2018 graduates took out student loans to pay for their education, and now owe an average of $29,800.

This debt is a drag on the economy. Young adults are becoming less able to afford cars and homes, marry and start families, and save for retirement. Their parents and grandparents, many of whom also took out loans to pay for their child’s education, are increasingly indebted and drawing down their own savings to help out.

Risk-sharing will have only a modest impact on total student debt because it is aimed at poor-performing schools. Eighty-three percent of student debt is taken out by students at schools that already perform well.

This debt is not only bad for the economy but also for young people struggling to begin their adult lives. A college degree does usually confer financial benefits over one’s lifetime, but the debt that finances those benefits is burdensome in other ways. For example, debt is generally correlated with poor mental and physical health. For young adults specifically, every $1,000 of student debt raises by 4 percent the odds of psychological distress.

Seventy-four percent of millennials with student loans experience elevated anxiety, depression, sleeplessness and other symptoms linked to the persistent stress of carrying high levels of student debt specifically. And the weight of student debt is preventing more young adults from taking risks and pursuing dreams, for example by starting new businesses. Student debt even contributes to the problem of rural “brain drain,” because many recent graduates find that they must move far away from their preferred communities in order to find jobs that pay enough to enable them to pay off the debt.

These harms, to individual borrowers and ultimately the economy, are not addressed by risk-sharing proposals. Those proposals focus on transferring the government’s lending costs onto institutions. Doing so might improve outcomes for students at poor-performing schools and relieve taxpayers of the burden of subsidizing underperforming institutions, but it leaves unfinished the work of addressing the broader costs of student debt today.