Amid the nationwide conversation about inequity in higher ed, elite schools like Stuyvesant High are under scrutiny 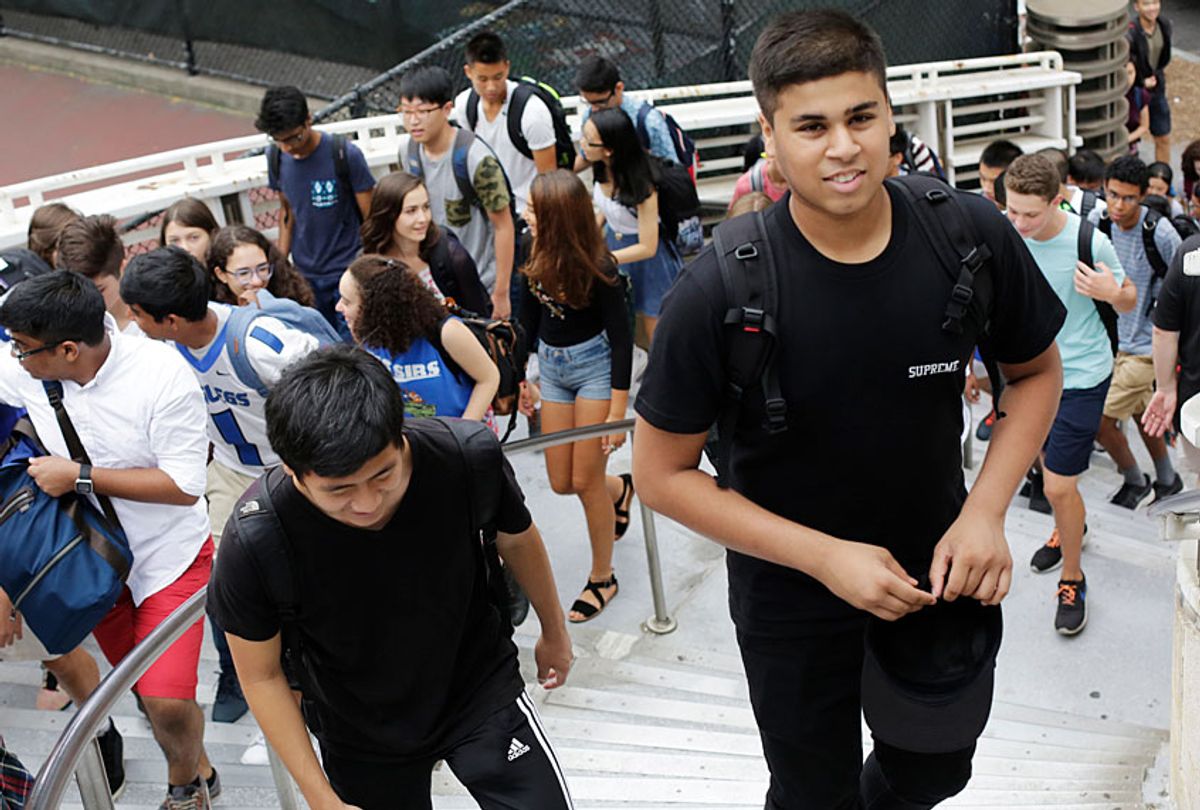 Admissions were extended earlier this week to the upcoming freshman class at Stuyvesant High School, a specialized prestigious public high school in New York City, where a single entrance exam determines acceptance. Out of 895 slots, only seven were offered to black students — down from ten last year, and from 13 the year before that.

The question of who gets in and who is excluded from Stuyvesant and the other seven specialized selective high schools in New York City has been the center of a recent raging debate that has highlighted a decades-long struggle in New York City: in one of the most diverse cities in the country and world, the public schools continue to be wildly segregated.

In 2014, UCLA's The Civil Rights Project named New York as having "the most segregated schools in the country." Black and Latinx students account for almost 70 percent of New York City's public school population, and yet they make up about 10 percent of the students admitted to the specialized high schools this year, according to the New York Times. That disparity continues to widen; at Stuyvesant, the number of black students has been falling for 20 years.

"We have a problem," David Kirkland, a professor of urban education and executive director of New York University's Metropolitan Center for Research on Equity and the Transformation of Schools, told Salon.

Which is not to say that all students of color are disproportionately disadvantaged in the city's selective admissions system, a point that many have amplified when arguing in favor of the status quo. At Stuyvesant, which has the highest admission standards, 74 percent of the current student body is Asian American. Asian-American students currently make up 16 percent of the city's public school population.

Offers to the specialized high schools arrived just a week after 50 people were arrested in the college admissions scam and a month after closing arguments in the Harvard admissions case where affirmative action is being challenged. Thus, the news of Stuyvesant's admissions comes at a unique time where the nation more broadly has been debating the stark structural inequities of education in America.

"New York City’s specialized admissions crisis and the national college admissions scandal are different sides of the same story — the meritocracy lie," wrote Richard Buery, a black alumni of Stuyvesant high school who is now chief of policy and public affairs at the KIPP Foundation, a network of public charter schools.

In examining these recent interconnecting and overlapping examples of concentrated wealth, racial bias, and advantage, two dominant and opposite conclusions emerge: either you believe there is something inherently wrong and biased about our education system from top to bottom, or else you believe in the worst racial stereotypes about the intelligence and ability of black and Latinx students.

"There is no middle ground," Kirkland said. "The symbolic weight of the egregious disparity in enrollment when it comes to specialized high schools, it says to black and brown populations —  particularly the black and brown families of students — that there is something wrong with your students, that they're intellectually inferior, that they're intellectually less than, and that symbolic argument to those students carries weight throughout the system. And I would even argue that it carries weight throughout the nation."

The sole admissions criteria for New York's elite specialized high schools is a high score on an entrance exam that tests students' skills in math and English, and it's mandated by state law. (In this, New York City is unique; according to the New York Times' reporting, not a single specialized school or private school anywhere else in the country admits students based exclusively on a state law that requires scores from one test.)

High-stakes testing isn't universally accepted as a gold standard either. A slew of academic research shows such exams do not accurately measure a student's capability nor predict their ability to succeed academically; what they reveal is a student's access to test prep.

Like the SATs, there is a robust and profitable local test prep industry, and some students can spend months or years preparing for the specialized high school exam. According to the Times, Stuyvesant "now has the lowest percentage of black and Hispanic students of any of New York City’s roughly 600 public high schools."

In June 2018, Mayor Bill de Blasio proposed eliminating the entrance exam altogether, describing it as "a roadblock to justice, progress and academic excellence." His announcement marked a return to a campaign promise from when he first ran for mayor to integrate the specialized high schools so that they "reflect the city better," but whose diversity has only weakened throughout his tenure.

De Blasio's larger vision requires approval from state lawmakers. In the meantime he announced an expansion of the initiative called the Discovery Program, which grants admission to low-income students who score just below the cutoff on the entrance exam and successfully complete a summer course.

The lawsuit and backlash echo what took place in court this past winter, in which anti-civil rights crusader Edward Blum, who filed a lawsuit in 2014 challenging Harvard's use of a race-conscious admissions process, claimed Harvard's practices, among other schools', unfairly discriminate against Asian Americans. After he unsuccessfully represented Abigail Fisher against the University of Texas in 2016, Blum changed course, explaining that he "needed Asian plaintiffs" to continue his relentless battle against affirmative action. A final decision in the Harvard case is pending. But if Blum is successful, that decision could greatly threaten the future of affirmative action in higher education.

"We're talking about right wing activists who are anti-affirmative action, who are anti-, in some ways, racial progress, who are using primarily Chinese-American parents as pawns to advocate for a system of racial separation, that the Supreme Court in 1954 decided was unconstitutional," Kirkland said of the lawsuit in New York City. "It decided in round one [that] separate is 'inherently' unequal, and what we have in New York City are systems of policies that produce separation, or segregation."

"What the lawsuit is saying is that the policies that we currently have in place, that give some parents a private school system on public funding, that we should reinforce that system, that we should reinforce a system that blocks out black and brown parents," Kirkland added. "So in a sense, what the lawsuit is saying is that if you have any policies that support vulnerable students, you are discriminating against privileged students. . . .  In fact, the logic of that type of proposal is if you give a man that's down a hand, you have discriminated against the man who's standing."

Ultimately, de Blasio proposes replacing the exam, which has been enshrined by state law since 1971, with a system that is more holistic, taking into consideration a student's grades and performance on state exams, and grants admission to top performers from every middle school in the city. It's a move designed to increase the admission of black and Latinx students into selective high schools across the board, so these elite schools can finally reflect the diversity of New York City. The proposal has been widely controversial.

"We live in a country that believes, so much so, in the notion of meritocracy, the notion that a single test can, in some way, tell us everything we need to know about who gets in and who doesn't," Kirkland said. "I think that we need to have a national reckoning about why we actually believe that. Why do we believe a single test should be the arbiter to determine who gets in, and who gets out, especially when that single test has consistently performed the work of stratifying our children along lines of race, economic status, and other forms of privilege and vulnerability?"

Critics of the plan question the fate of Asian-American students, who currently make about 60 percent of students at the specialized high schools, and also claim that the elimination of the entrance exam would diminish the academic rigor of the top-ranked schools. State Sen. John Liu, who chairs the Senate’s New York City education committee, told the Times, "a desegregation plan can only be effective if the problem is viewed as a whole, and one that is not formulated to the total exclusion of Asian-Americans."

Scrapping the exam is so polarizing that even progressive politicians like Rep. Alexandria Ocasio-Cortez have chosen to address education in New York City more broadly. But Kirkland says there should be a focus on the implicit anti-blackness of much of the larger pushback.

"There is hysteria across public schools, but again, that is not divorced from anti-black and brown racism, and white supremacy," he said. "I think what it's saying is they're going to school with black and brown students, and it's a detriment. That if you go to school with mostly white students, you'll have access to things that you don't have. And I think that some of those sympathies are fundamentally racist."

Amy Stuart Wells, a professor of sociology and education at Columbia University’s Teachers College, explained to the New York Times how a similar point is often veiled in the fierce resistance to integrating schools in the city at large. "In a post-racial era, we don’t have to say it’s about race or the color of the kids in the building," she told Nikole Hannah-Jones. "We can concentrate poverty and kids of color and then fail to provide the resources to support and sustain those schools, and then we can see a school full of black kids and then say, 'Oh, look at their test scores.' It’s all very tidy now, this whole system."

When the most prestigious public schools in New York City so disproportionately underrepresent the black and Latinx students who make up the majority of the city, the system is clearly anything but equal. While there are no easy answers to deep-rooted structural problems, an inability or lack of willingness to wrestle directly with them has kept black and brown children isolated — away from public education resources and out of prestigious specialized schools — and has enshrined segregated as the norm in New York City, as well as elsewhere.

Kirkland and others are working towards solutions with a school diversity advisory group that is thinking critically about the specialized high schools and how to reform them. The committee will give recommendations to the city that he says are rooted in equity.

But Kirkland admits he struggles with optimism, particularly because the injustice is so visible. The best public schools in the city are, relatively speaking, bastions of luxury, while the least-performing schools are so under-resourced that they are crumbling. "The visible representation is distinct, and reminiscent of water fountains," Kirkland said. "That plaque that said, 'For Blacks Only' and 'For Whites Only,' with the black water fountain more rusty and almost falling apart, while the white water fountain was still pristine. We have, here in this city, very much, a visual articulation of inequity."