6 years after Rana Plaza collapse, an accord to improve Bangladesh’s worker safety is in jeopardy 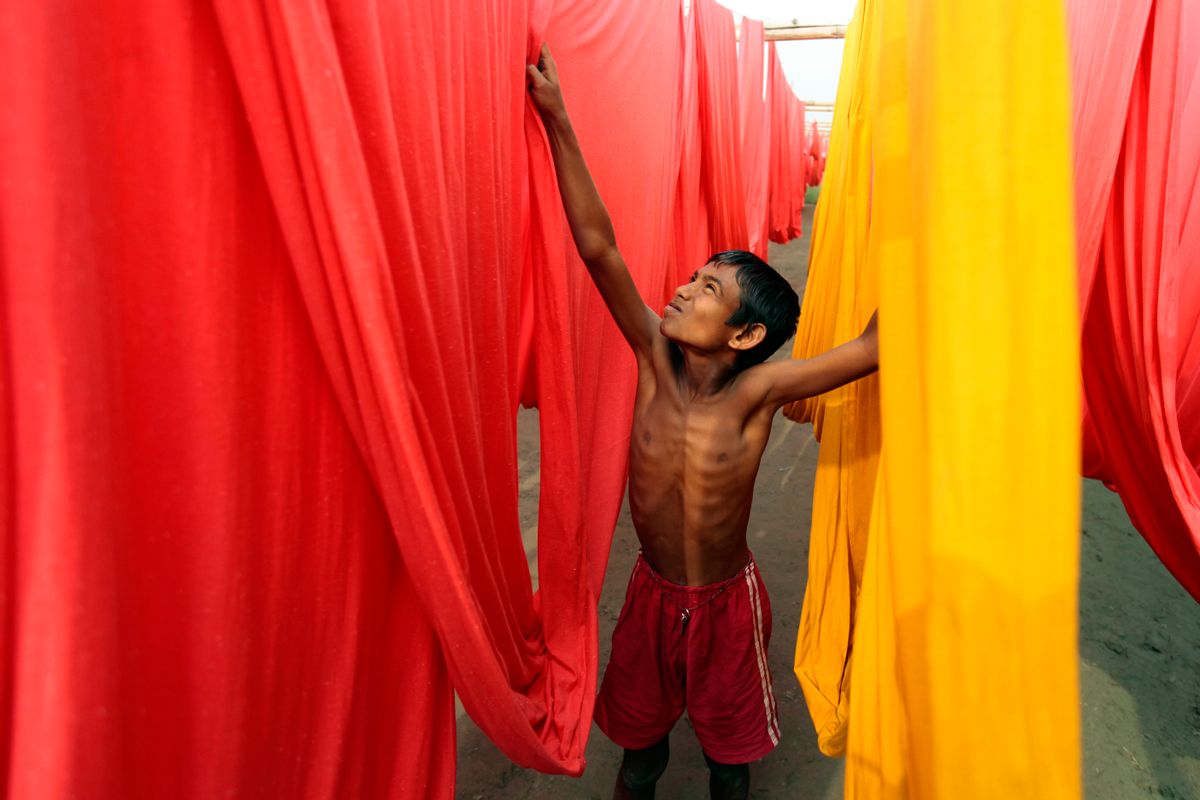 FILE- In this Saturday, Dec. 22, 2012 file photo, a Bangladeshi child works at a clothes-dyeing factory in Narayanganj, outskirts of Dhaka, Bangladesh. A new study by the London-based Overseas Development Institute found that thousands of Bangladeshi children who live in the capital's slums are working illegally for an average of 64 hours a week. (AP Photo/A.M. Ahad, File) (AP)
--

Today’s clothing retail industry is driven by “fast fashion” — a business model of break-neck production, frenzied trend cycles and ravenous consumption. But the factories producing the clothes are mired in old-fashioned industrial drudgery, and cleaning up dirty working conditions has been a slog. For several years, however, an innovative system for reforming one of the world's bastions of sweatshop labor has slowly plodded ahead, auditing and remediating some of the world's most dangerous factories. Yet, after about half a decade of a steady evolution in workplace safety and protections for workers, activists say the Bangladesh Accord is now at risk of unraveling under political pressure.

To date, the Accord's enforcement system, run by a transnational team of labor auditors, union and worker advocates, has directed the inspection of about 2,000 factories and identified tens of thousands of hazards, from faulty wiring to foundering building structures. The enforcement system has also led safety trainings and developed worker-led watchdog programs. The Accord has received cooperation and funding from multinational fashion brands, oversight from the International Labour Organization, and grassroots labor support from the global federation IndustriALL, SEIU and AFL-CIO, as well as Bangladesh-based unions. The pact has led to major investments in inspecting and renovating factories according to legally binding standards.

Repairs are completed or underway at more than 1,100 factories, with tens of thousands of fire-related and electrical safety repairs already completed. The projects range from remediating fire exits and detection systems to fixing wiring, to providing Accord-approved engineering assessments. According to the safety staff's follow-up inspections, as of late January, roughly 67 to 89 percent of structural, electrical and fire-related safety remediations had either been verified or were pending verification. Outside funding from signatory brands provides further guarantees that bringing the industry up to standard can be both financially and socially sustainable — a potential model for other manufacturing hubs in the Global South.

For the image-conscious signatory brands like H&M, the program provides a major public-relations boost. But the Accord began as a day of reckoning — born in the wake of the 2013 collapse of Rana Plaza, Bangladesh's worst modern-day industrial disaster. Following the preventable deaths of more than 1,100 workers, the industry channeled its public shame into a legally binding global compact to make work safer for workers in Bangladesh factories. Both international human rights groups and local unions and worker advocates have been involved with the development and en­­forcement process, as well as generally ensuring that the Accord provides a platform for workers' self-advocacy on occupational safety issues.

Today, however, the Accord is dangling by a thread in a political standoff with Bangladesh officials and industry, potentially undercutting years of progress on improving workplace protections.

The Bangladesh government ordered the Accord, which was recently renewed with many newly negotiated enhancements, to cease operating through its Dhaka office at the end of last November, while severely restricting the Accord’s staff from conducting basic regulatory functions, including citing safety violations and sanctioning employers who retaliate against whistleblowers who report hazardous conditions. The program is currently ensnared in a legal impasse with the government and owners under a restraining order from the High Court, pending further court proceedings.

Although the transition plan provides for the transfer of duties to the Bangladesh Remediation Coordination Cell of the Department of Inspections for Factories and Establishments (RCC-DIFE), the Accord’s international staff sees the new authority as a vehicle for corporate capture of the regulatory apparatus. The Accord Steering Committee stated in mid-February that “the RCC-DIFE remains at its earliest stages of development and is not yet prepared to adequately regulate building and occupational safety and health at its current base of [ready-made garment] factories.”

Liana Foxvog of the U.S.-based advocacy group International Labor Rights Forum, told In These Times via email, “The highly obstructive constraints that the government is attempting to impose would strip the globally-respected safety initiative of its ability to operate independently of government and employer control.” In other words, the main purpose of absorbing the accord into a business-friendly regulatory regime is to unravel the Accord’s standards and autonomy.

The stakes of the impasse go beyond the regulations of the Accord itself. The garment workforce in Bangladesh may have seen meaningful improvements in hundreds of factories, but the Accord covers just a fraction of the several thousand supplier factories in Bangladesh, including many that feed into the massive stream of apparel exports that flood Western retail markets. Many local factories have participated in a controversial corporate-friendly alternative to the Accord known as the Alliance for Bangladesh Worker Safety, pushed by Gap and other brands, which followed a laxer“voluntary” ethical sourcing model and phased out at the end of 2018.

But the gains under the Accord have been significant and paved the way for bolder advancements in both workplace safety and workers' rights.

In a joint statement supporting the continuation of the Accord last October, the unions involved with the Accord stressed that the progress of the program had been unprecedented, but had further to go.

“The Accord inspection programs are ongoing and have not yet completed their purpose. ... It is important both for the safety of workers and the benefit of the industry that the Accord is allowed to continue to function to ensure the factories are safe to work in,” said Amin Amirul Haque, a leader of one of the union signatories of the Accord, the National Garment Workers Federation in the coalition's statement. “Otherwise consumers and buyers in the international market will again lose confidence in the garments produced in Bangladesh.”

For Bangladeshi factory owners, however, the short-term interest in maximizing profit seems to outweigh the social dividend of safeguarding workers’ lives. Garrett Brown, an industrial hygienist who has assisted with the Accord's local safety-training programs, tells In These Times that advocates are mainly concerned that the takeover by the Bangladesh government will undo past progress “for the same reasons that were problems before Rana Plaza, which is that the government is heavily influenced by the garment industry and doesn't want to do anything that would reduce exports.” There is a tension between local suppliers, who are subjected to the rigors of the regulatory process and responsible for making required retrofits, and the brands that use the Accord to hold suppliers accountable—reflecting the growing sensitivity of Western brands over the disturbing pattern of labor abuses overseas.

At the same time, Brown stresses that the fashion brands are keen on upholding the Accord because they see a business case for investing in safety: For image-conscious companies, the Accord has become, ”the goose that laid the golden egg," says Brown. "They don't have to worry about being subject to campaigns by labor rights organizations and concerned consumers.”

Yet, local suppliers stand to lose as well: The Accord's Chief Safety Inspector has warned that, were the Accord blocked from continuing its factory audits, hundreds of under-performing facilities could no longer be monitored, and would subsequently be barred from doing business with signatory brands. Dozens of factories have already been terminated from the system due to failure to meet safety standards. In the future, without independent staff on the ground, labor activists fear that the Accord authorities will lack both the capacity and the will to intervene as forcefully in the future.

An abrupt end to the Accord could stifle Bangladesh’s already embattled labor movement. Despite general hostility toward labor activism by bosses and the government, with frequent crackdowns on strikes and union organizing efforts, the Accord encouraged the formation of autono­­mous worker safety committees, which have provided a rare source of legal leverage on major issues of worker safety.

Kalpona Akter of the Bangladesh Center for Workers’ Solidarity, which has long campaigned for reforms in the global supply chain, stated, “We need the Accord to continue to work. It has made enormous change and made our workers’ lives safer. Now workers have right to say NO to dangerous work. If the Accord would have to leave the country it would mean putting workers lives in danger again and we should not take this risk.”

The threat of the Accord's Dhaka office being forced to close coincides with a crackdown on  worker protests across the garment industry. Following a surge of strikes and protests in December 2018 and January 2019, about 11,000 workers lost their jobs, according to the global labor federation IndustriALL. The brutal suppression underscored that the meaning of “safety” at work is about much more than just fire exits. Some factories affected by the crackdown were producing for brands that are also signatories to the Accord—signifying how the struggle for safe workplaces and just jobs are interwoven at the bottom of the global supply chain. Foxvog noted that solidarity protests in Europe and the United States made demands on the brands: that they "press their suppliers to drop all charges, rehire all dismissed workers with back wages, and denounce this crackdown on workers’ rights,” in addition to protecting the Accord.

Christine Miedema of the Netherlands-based Clean Clothes Campaign, says via email from Amsterdam that, “Brands will remain responsible for safety in their supply chains, whatever the outcome of the court proceedings in Bangladesh ... The Accord is a binding contract for brands, which they cannot leave before having fulfilled all their obligations.”

Since the Accord was spawned by a movement, not a state decree, the power of the agreement will endure through the social contract that it embodies for the fashion industry: the social imperative to break the link between cheap prices in the shop window, and the cost of workers’ lives on the shop floor.