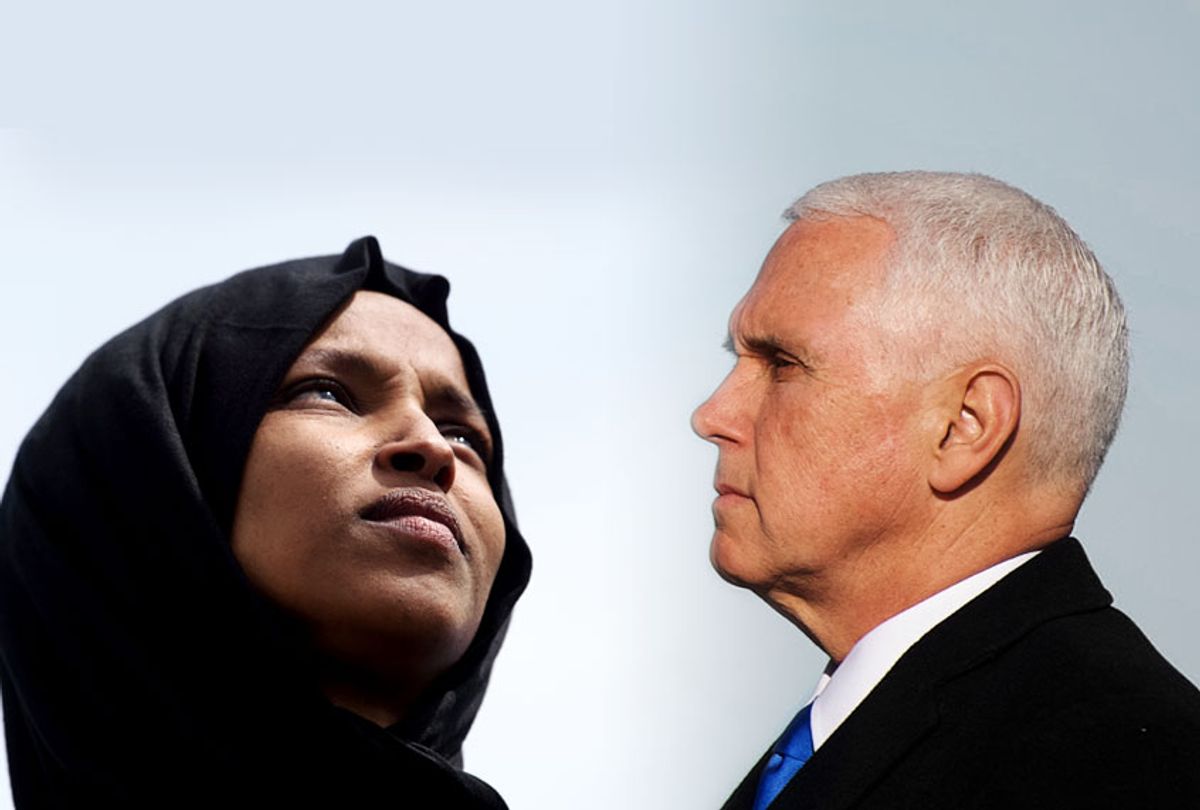 Vice President Mike Pence received a standing ovation from a crowd of more than 18,000 people at the American Israel Public Affairs Committee’s 2019 policy conference on Monday after he excoriated freshman Rep. Ilhan Omar, D-Minn., and blasted Democratic presidential candidates for “boycotting” the most prominent gathering of politically active American Jews.

Although he never mentioned Omar by name, Pence pointed to the recent controversy surrounding her criticism of Israel to accuse Democratic leaders of propagating rampant anti-Semitism within their ranks.

"It’s astonishing to think that the party of Harry Truman ... has been co-opted by people who promote rank anti-Semitic rhetoric," Pence said. “And as I stand before you, eight Democrat candidates for president are actually boycotting this very conference. So let me be clear on this point: Anyone who aspires to the highest office in the land should not be afraid to stand with the strongest supporters of Israel in America.”

Top Democratic presidential candidates, including Bernie Sanders, Kamala Harris, Beto O'Rourke and Elizabeth Warren, did not attend this year’s confab. But as organizers pointed out, it's not standard practice to invite presidential candidates to speak in non-election years. Hillary Clinton, for example, did not attend AIPAC’s conference in 2015, but did in 2016. The same was true of Trump in 2015 and 2016. Interestingly, the president declined to attend this year’s conference.

While the progressive advocacy group MoveOn encouraged Democrats to skip AIPAC’s policy conference in protest of Israel’s treatment of Palestinians and minorities in Israel, no 2020 candidate has cited the campaign as a basis for skipping this year’s events. An increasing number of progressive Democrats, however, have voiced strong criticisms of the policies of the current right-wing Israeli government — including Omar, the first African refugee elected to Congress. It is becoming increasingly clear that ahead of the 2020 election, progressives in the Democratic Party are pushing for a more honest conversation about the U.S.-Israel alliance, even as Trump pursues a policy in lockstep with Israel’s right-wing government. Republicans, led by the president and vice president, are moving ever so forcefully to stifle that burgeoning debate.

Anti-Semitism has no place in the Congress of the United States of America. At a minimum, anyone who slanders those who support this historic alliance between the US & Israel should never have a seat on the Foreign Affairs Committee of the United States House of Representatives. pic.twitter.com/R9csw7pKdp

Pence's boss, to be sure, has pushed for even more severe punishment of Omar for her criticism of AIPAC, calling on the freshman to resign from Congress days after she suggested that U.S. support of Israel is driven specifically by donations from the prominent pro-Israel lobby group. But Pence’s demand that Omar be removed from the Foreign Affairs Committee echoes a standard Republican talking point: That the highly influential congressional committee squelch all dissent on Israel.

“All over the world, anti-Semitism is on the rise,” Pence said. “On college campuses, in the marketplace, even in the halls of Congress. You know, there was a time when support for Israel was not a partisan issue here in Washington … But how things have changed.”

Despite Pence’s claim, aside from Omar’s remarks — which were rebuked by her congressional colleagues with a resolution condemning hate speech — not much has changed within Democratic leadership in regards to Israel, or even AIPAC. Top congressional Democrats, including House Speaker Nancy Pelosi and Senate Minority Leader Chuck Schumer, are scheduled to speak at this year’s conference. Speaking Sunday evening at AIPAC, House Majority Leader Steny Hoyer, D-Md., reaffirmed his support for Israel “proudly and unapologetically.” Two new pro-Israel groups, one started by former AIPAC executives, have even popped up since Omar’s remarks with the explicit intent of promoting pro-Israel Democratic candidates.

Still, Pence went on to attack Democratic presidential hopefuls who oppose legislation to bar supporters of the Boycott, Divestment, and Sanctions (BDS) movement from access to federal contracts. Many progressive Democrats view such bills as an attempt to suppress the free speech rights of American citizens.

“As governor of Indiana, I was proud to sign the toughest anti-BDS legislation of any state in the union. But remarkably, today, all but one Democrat running for president voted against the Combating BDS Act in the United States,” Pence said. (The exception he mentioned was Sen. Amy Klobuchar of Minnesota.)

Pence's attack at AIPAC came hours before Trump welcomed Israeli Prime Minister Benjamin Netanyahu to the White House to celebrate the signing of a presidential proclamation recognizing Israel’s long-disputed authority over the Golan Heights. That decision overturns decades of U.S. policy and ignores recognized international law on the limits of Israel’s boundaries. When the move was mentioned by AIPAC President Mort Fridman on Monday, the crowd broke out in wild applause.

Earlier in the day, President Trump repeated his claim to reporters that "Democrats hate Jewish people." He has repeatedly used the dustup over Omar’s criticism of AIPAC to paint Democrats as dangerously anti-Semitic in hopes of generating a "Jexodus" of Jews moving out of the Democratic Party. Such a hope has little basis in reality. In the 2018 midterms, Democratic candidates won more than 75 percent of the Jewish vote for House seats. In the 116th Congress, there are 26 House members who are Jewish, 24 of whom are Democrats. Seven of eight Jewish senators are Democrats -- and the eighth is Bernie Sanders.