Ilhan Omar, AIPAC and the Democrats: Party rushes to defend Israel lobby against one woman

Democrats scourge one of their own over a poorly phrased tweet, but barely seem to notice Trump's racist insults 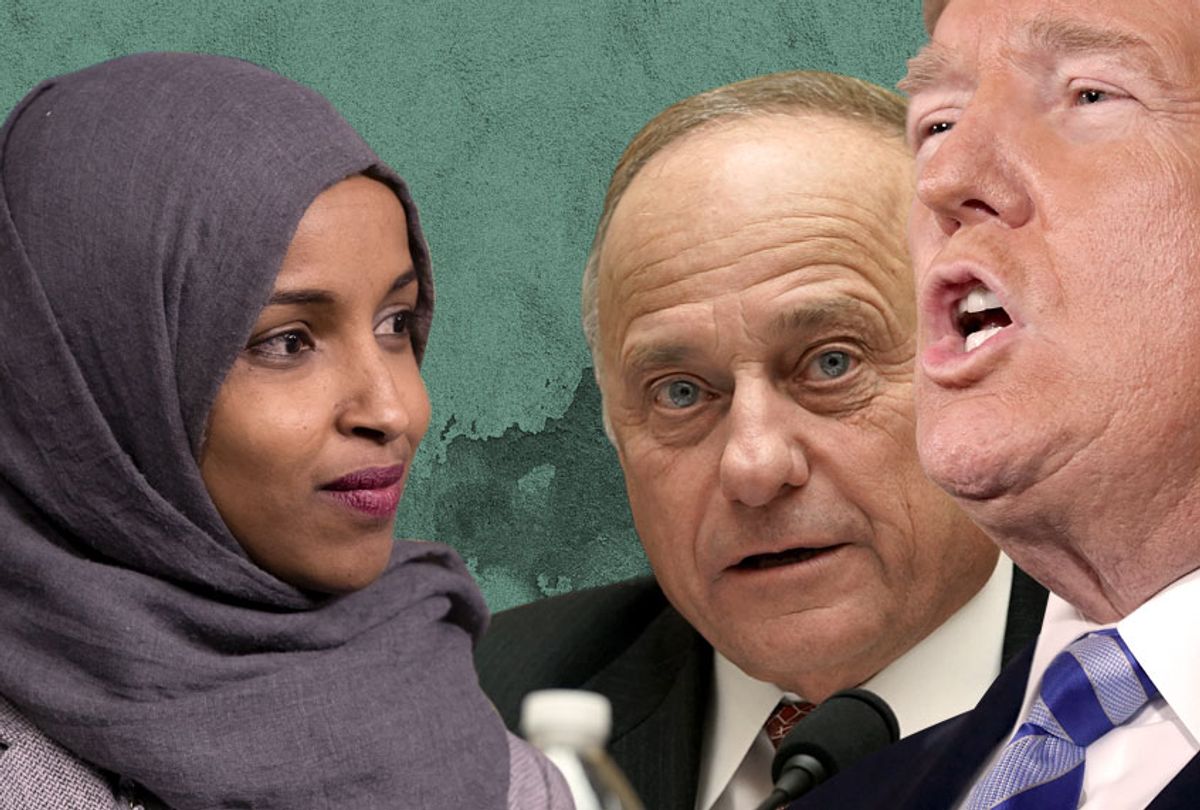 The year is still young, but so far the mainstream media has clearly demonstrated that it remains ill-equipped to recognize obviously bad-faith attacks promulgated by the right-wing. And Democrats, perhaps most troubling, still appear unable and unwilling to fight back — just as another presidential campaign cycle in the era of fake news begins to ramp up.

First, selectively edited clips of Virginia Democrats discussing a proposed bill to extend access to late-term abortion was used by anti-choice groups last month to falsely claim that the commonwealth’s executive, Gov. Ralph Northam, endorsed infanticide. He had done no such thing. But instead of fact-checking and investigating the controversy, many outlets uncritically reported the manufactured outrage thereby establishing a link, at least rhetorically, between the horrendous act of killing a newborn and the Democratic Party.

Then, as Sen. Elizabeth Warren officially launched her presidential campaign over the weekend, much of the media appeared too preoccupied with tracking down her past claims of Native American affiliation to notice that the president of the United States joked about state-sanctioned genocide in his attack against her.

Instead of being followed up with questions for Republican lawmakers, like Oklahoma’s Sen. James Lankford, about the president's eliciting of the Trail of Tears, Saturday evening's tweet mocking the tragic historical experience of Native Americans was knocked off the front pages by Monday morning. Even those journalists who did attempt to hold Republicans accountable for the president’s racist tweet, as with Jake Tapper’s questioning of Rep. Liz Cheney, R-Wyo., on Sunday, only served up a platform to continue the coordinated attacks on Warren without any mention that slurs like “Pocahontas” and references to the Trail of Tears are harmful. Others, like Fox News’ Brit Hume, attempted to defend Trump by claiming that he is too ignorant of history to have meant any harm.

The Los Angeles Times' Michael Hiltzik was one of the few political commentators still interrogating the appalling tweet on Monday, asking: "Does Hume’s defense of Trump’s racist references to Native Americans extend to the Republican Party as a whole and to its sedulous followers?"

Here’s how the Republican National Committee headlined its response to Warren’s candidacy on Saturday: “Fauxcahontas’ Failure To Launch.” GOP Chair Ronna Romney McDaniel, Mitt Romney’s niece, thought this gibe was sufficiently hilarious to tweet out the article under her name. Jacob Wohl, a right-wing pro-Trump blogger, tweeted a photograph of Warren altered to give her a quiver of arrows and an Indian headband, over the text: “If you’re like me, you CAN’T WAIT to see Trump turn the campaign trail into the ‘Trail of Tears’ in 2020.” Obviously, the Republican leadership’s indulgence of racist mockery gives people like Wohl the green light to run with it.

Coupled with Donald Trump Jr.’s Instagram post of a response cheerleading genocide, with a caption that read, “Savage!,” this weekend's galling display of GOP racism should have garnered significant media attention and Democratic condemnation. Instead, it was all greeted with a collective shrug. Republicans have seized on Warren’s sporadic claims of Native ancestry simply to promote racist and disingenuous attacks on affirmative action. That egregious act of bad faith is just treated as unremarkable.

Meanwhile, an inartful tweet from a freshman Democratic congresswoman criticizing the pro-Israel lobby was treated by the media, Democrats and the right wing alike as wildly offensive and deeply anti-Semitic, swiftly drawing bipartisan condemnation on Monday.

Within hours of criticizing AIPAC, the American Israel Public Affairs Committee, in a tweet on Sunday, freshman Rep. Ilhan Omar, D-Minn., was slammed by her freshman colleagues and the veteran leaders of her own party. In a joint statement on Monday, House Speaker Nancy Pelosi and five other members of Democratic leadership acquiesced to Minority Leader Kevin McCarthy’s demand that Omar be sanctioned for her stance on Israel and AIPAC’s influence on U.S. politics and Middle East policy.

“Legitimate criticism of Israel’s policies is protected by the values of free speech and democratic debate that the United States and Israel share,” wrote the top Democrats, including Majority Leader Steny Hoyer, who has signed on to a bill prohibiting federal contractors from participating in any protest or boycott of Israel. “But Congresswoman Omar’s use of anti-Semitic tropes and prejudicial accusations about Israel’s supporters is deeply offensive.”

McCarthy, for his part, received very little backlash for a tweet last year accusing Jewish billionaires of trying to “buy” the midterm elections. Still, Omar apologized for the phrasing of her tweet by Monday afternoon.

"Anti-Semitism is real and I am grateful for Jewish allies and colleagues who are educating me on the painful history of anti-Semitic tropes," Omar said in a statement. "My intention is never to offend my constituents or Jewish Americans as a whole. We have to always be willing to step back and think through criticism, just as I expect people to hear me when others attack me for my identity. This is why I unequivocally apologize."

Still, Omar said she stood behind her critique of AIPAC’s policy agenda.

"At the same time, I reaffirm the problematic role of lobbyists in our politics, whether it be AIPAC, the NRA or the fossil fuel industry. It's gone on too long and we must be willing to address it," she wrote.

But too many immediately assumed Omar’s tweet suggested  sinister motives for questioning the influence of a lobbying group working to promote Israeli interests in the U.S. Omar has been consistent in her critique on dark money in politics, but for some reason these latest comments -- which never mentioned Israel or the Jewish people -- were immediately treated as anti-Semitic. That might be due to the source of the critique just as much as the target.

False accusations of anti-Semitism often act as a thin cover for Islamophobia on the right. Omar is one of two Muslim women elected to Congress last fall, along with Rep. Rashida Tlaib of Michigan, and is the first member in history to wear a hijab. Both Omar and Tlaib have expressed sympathy for the boycott, divestment and sanctions movement (BDS) aimed at protest Israel's treatment of Palestinians. Last month, Sen. Marco Rubio, R-Fla., accused freshman Tlaib of anti-Semitism after she suggested that a bill prohibiting American citizens who do business with the federal government from supporting any anti-Israel boycott was unconstitutional.

“I think she should be ashamed of herself," President Trump said of Omar on Monday. " I don’t think her apology was adequate.” House Minority Whip Steve Scalise of Louisiana, who once reportedly referred to himself as "David Duke without the baggage," called on Democrats to strip her of her committee assignments. McCarthy, in a statement, said the GOP would “take action this week to ensure the House speaks out against this hatred.”

Rep. Lee Zeldin, R-N.Y.,  who previously blamed Omar for inspiring anti-Semites to target his office, has sponsored a resolution rejecting “anti-Israel and anti-Semitic hatred in the United States and around the world.” It equates Omar and Tlaib with the 2017 neo-Nazi rally in Charlottesville and last year’s mass shooting at a Pittsburgh synagogue.

“I see this as an Islamophobic attack against two outspoken women of color who are shaking things up by boldly standing for crucial issues,” Yousef Munayyer, executive director of the U.S. Campaign for Palestinian Rights, told The New York Times last month.

Omar's detractors point to her 2012 tweet that “Israel has hypnotized the world” to suggest deep-rooted anti-Semitism. She has apologized for that one as well, claiming she inadvertently invoked the anti-Semitic trope that Jews secretly control the world. Sunday's tweet was read by some observers as playing on another harmful trope, that money is at the center of that control. None of this is helpful Palestinian liberation and self-determination. The lesson, however, should be the evergreen message to "never tweet," not the expulsion of a minority voice from one of the most one-sided debates in Congress. Claiming that criticism of AIPAC is an attack on all Jews is a bad-faith effort to chill growing policy criticism of Israel on the left.

The uproar over Omar's tweet came on the same day The New Yorker's Ronan Farrow and Adam Entous published a detailed report about a covert Israeli private intelligence company run by former members of Israel’s secret services, which was recently hired to mount "a campaign on behalf of wealthy Jewish-American donors to embarrass and intimidate activists on American college campuses who support a movement to put economic pressure on Israel because of its treatment of the Palestinians."

According to a recent Pew survey, the number of liberal Democrats who sympathize more with Israel than with the Palestinians has dropped from 33 percent to 19 percent over the last three years. It’s disappointing but in no way surprising, to see Democratic elected officials refuse even feign support for Palestinians, while dismissing the casual racism of Republicans like Trump and  Rep. Steve King of Iowa.

“I don’t think she’s anti-Semitic,” Majority Leader Steny Hoyer said of Omar on Monday. He told Roll Call that Democrats would not strip Omar of committee assignments, as Republicans did to King after he publicly mused about how the term "white supremacy" became offensive. “She did apologize. The key will be that when we make a mistake like that, conscious or unconscious, that we don’t repeat it. That will be the proof of the pudding.” Hoyer was also responsible for blocking an effort to censure King, an actual white nationalist, only last month.