Republicans are not telling the truth: Virginia's abortion bill would not legalize infanticide

No, Virginia Democrats do not support infanticide 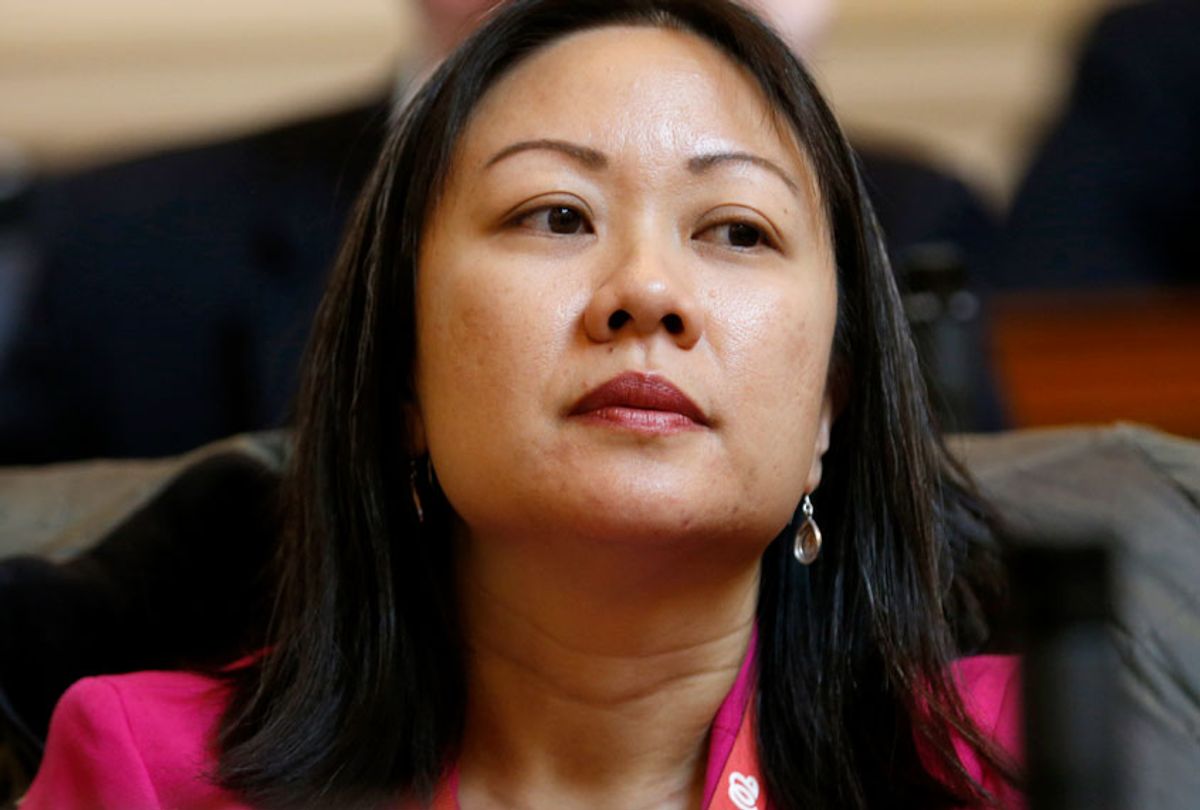 Before Virginia Gov. Ralph Northam came under widespread condemnation for a medical school yearbook image of him in either blackface or the uniform of the KKK (the Democrat elected in 2017 did not clarify in his defiant apology statement on Friday), he spent the week under fire from conservative and anti-choice groups for comments he made about a controversial new abortion bill in Virginia.

Even after Republican state lawmakers voted to table legislation that would have loosened late-term abortion restrictions, Virginia Democrats spent much of the week marred by the controversy. The legislation, known as the Repeal Act, was put under a microscope after the bill's sponsor incorrectly said it would allow the procedure to occur even after a woman went into labor. A state House subcommittee voted 5-3 to kill the bill, with all Republicans voting against it and all Democrats supporting it.

The bill, sponsored by Democratic Del. Kathy Tran, would make changes to third-trimester abortions, which are already permitted under Virginia law, when the mother's life or health would be "substantially and irremediably" harmed by continuing a pregnancy. Under current state law, three doctors must certify such a procedure. Tran's legislation, which has been introduced in years past, would require only one doctor's consent to legally terminate a pregnancy at 40 weeks, the end of the third trimester. It also seeks to eliminate the need to prove the damage is "substantial or irremediable." It would also allow second-trimester abortions to be performed in a clinic, instead of a hospital. The legislation does not attempt to change the circumstances, however, under which a woman can obtain a late-term abortion.

Tran immediately came under fierce backlash this week after she incorrectly told a Republican lawmaker that her proposal would allow for an abortion to occur when a woman is in labor and about to give birth. Her comments, made during a legislative hearing about the bill, were quickly clipped and circulated by Republican groups and went viral on social media.

Virginia House Republicans shared a video of Tran's testimony on Facebook writing, "Virginia House Democrats proposed legislation to allow abortions up to just seconds before that precious child takes their first breath. Watch for yourself."

"Thankfully, our strong conservative majority was able to defeat this bill," they wrote.

Tran issued a video statement on Thursday in an effort to explain the intent of the bill she introduced.

"I introduced a bill to repeal the medically unnecessary and unduly burdensome barriers Virginia women face when they are accessing this healthcare service in consultation with their doctor," she explained, referring to the Virginia law that mandates three doctors certify a third-trimester abortion.

"I presented my bill this week and I was really surprised at the line of questioning that I got," she continued. "I want to be very clear by what's currently allowed in Virginia law. Right now, women are able to access an abortion in the later stages of pregnancy under certain conditions with the approval of medical doctors. I've done nothing to change that. What I have done is try to make sure that women are able to make these decisions and access these services in a timely manner."

To push the bill forward, Tran has said the legislation "eliminates medically unnecessary and unduly burdensome requirements that make it difficult for women to access abortions," recognizing that "women have the constitutional right to make healthcare decisions about their own bodies."

The Virginia Democrat and her family have reportedly received death threats following her testimony. Fox News, Breitbart and other conservative news outlets shared stories suggesting that Virginia Democrats supported infanticide. Tran has faced mounting backlash from Republican lawmakers in Virginia, conservatives across the country and even President Donald Trump, who said he had seen the video and called Tran's remarks "terrible."

"Do you remember when I said Hillary Clinton was willing to rip the baby out of the womb?" Trump told the Daily Caller Wednesday. "That's what it is. That's what they're doing."

Republicans, in an effort to maintain a slim majority in an election year when every seat in the legislature is on the ballot, sought to draw attention to the bill to paint the Democrats as radicals who are out of touch with their constituents. In that way, the Republicans played their hand directly into the country's growing partisan divide at a time when a heap of ambitious and progressive Democrats are mounting presidential campaigns on issues unrelated to abortion.

"What my Democratic colleagues are most concerned about is what this moment actually reveals," Republican Del. Todd Gilbert said, referring to Tran's testimony. "It was a moment of unbridled honesty about their agenda and their legislation and what it actually does."

Tran said the backlash was surprising, given that similar legislation had been introduced (and failed) in previous sessions without such major backlash.

Virginia Gov. Ralph Northam, a Democrat, expressed support for the bill and spoke about his belief that politicians should leave termination decisions to women, their families and their physicians during a radio interview on Wednesday. He told WTOP that late-term abortions are "done in cases where there may be severe deformities. There may be a fetus that's not viable. So in this particular example,  if a mother's in labor, I can tell you exactly what would happen. The infant would be delivered, the infant would be kept comfortable, the infant would be resuscitated if that's what the mother and the family desired, and then a discussion would ensue between the physicians and the mother." His remarks in the interview about third-trimester abortions sparked outrage and launched a social media firestorm.

"In just a few years pro-abortion zealots went from 'safe, legal, and rare' to 'keep the newborns comfortable while the doctor debates infanticide,'" Sen. Ben Sasse, R-NE, in a statement on Wednesday.

And DeMint, the former South Carolina senator who is now the chairman of the Conservative Partnership Institute, tweeted: "VA Gov Northam is no moderate, this is one of the most vile, radical pro-abortion positions ever put forward. This is evil. He should recant or resign."

Republican lawmakers on Tuesday night had begun circulating a 30-second video of Tran discussing the bill in subcommittee the day before. The Republican Party of Virginia had sent the clip out in a fundraising email the next morning, the Washington Post reported.

The video footage shows Tran before the subcommittee as Gilbert, who is off camera, questions her about whether the bill allows an abortion up to the moment a woman is about to give birth.

Tran paused at the question, and Gilbert added, "She's dilating."

"Mr. Chairman, that would be, you know, a decision that the doctor, the physician and the woman would make a decision at that point," she replied.

"I understand that," Gilbert said. "I'm asking if your bill allows that."

"My bill would allow that, yes," Tran answered.

"Governor Northam vowed to enact [the same law] if Democrats take over the House and Senate in 2019," he said.  "I will never stop fighting for the promise of life, as long as I hold a gavel, as long as I can speak in this microphone."

Democratic Del. Eileen Filler-Corn, the minority leader, then accused Republican lawmakers of misrepresenting the issue and called their treatment of Tran "part of an orchestrated ambush." The public statements, she said, "were made to inflame passions throughout the social media echo chamber. And they succeeded. What was the result? Ongoing harassment, intimidation against the patron, several members of this body, their families and their children."

The furor in Virginia comes roughly one week after New York legislators passed a bill granting women the right to abortions under the state's public health law, instead of penal law. The legislation, known as the Reproductive Health Act, updates the state's abortion laws for the first time since 1970. It will allow abortions to be performed by an authorized practitioner within the first 24 weeks of pregnancy, or if the fetus isn't viable, or at any time if patient's life or health is at risk. The previous law only allowed abortions after 24 weeks of pregnancy if a woman's life was at risk. States including Rhode Island, Maryland, Massachusetts and New Mexico are expected to pass similar bills expanding abortion access or to move to strip old laws that restrict access.

The loosening of the laws comes partly as a reaction to the confirmation of Supreme Court Justice Brett Kavanaugh last October. Anti-choice groups hope Kavanaugh would provide the fifth vote on a court decision to overturn or weaken Roe v. Wade, the 1973 Supreme Court decision that recognized that the U.S. Constitution protects a person's right to make their own medical decisions — including the right to terminate a pregnancy. The Center for Reproductive Rights has warned that if Roe v. Wade is overturned, 22 states are likely to ban abortion outright.