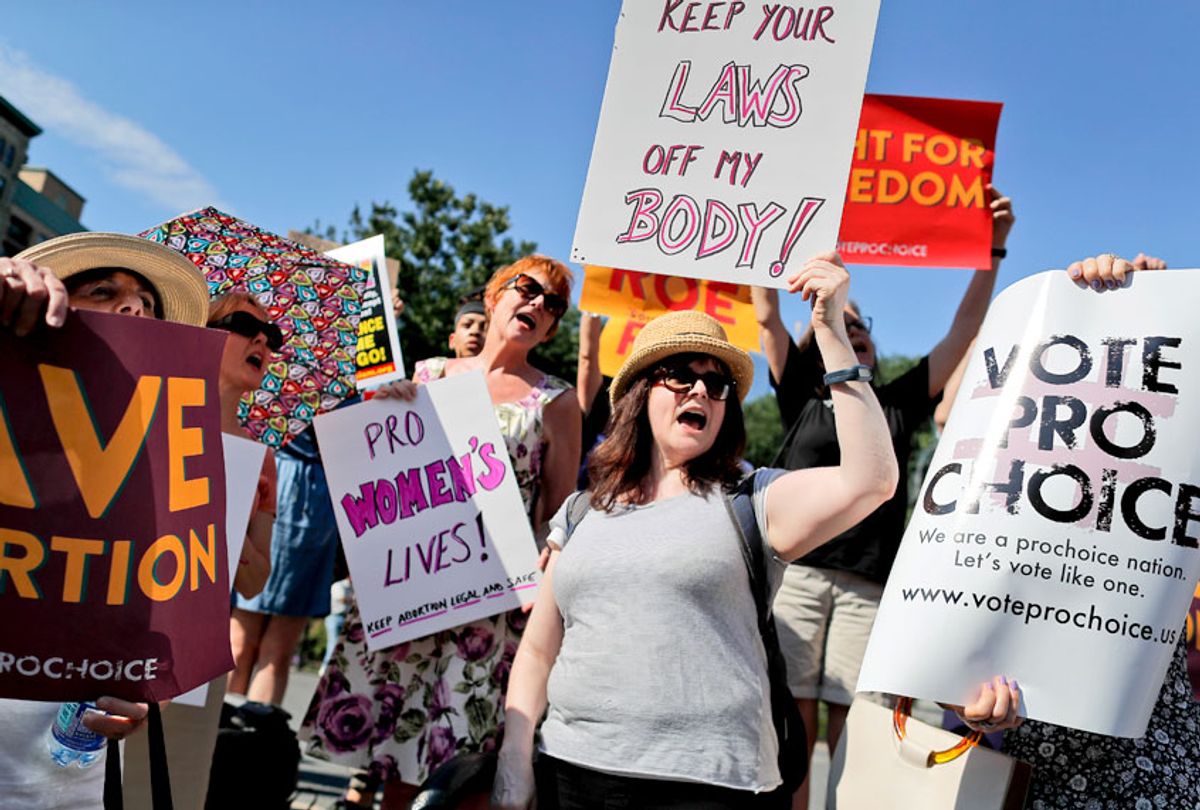 More than forty years since the U.S. Supreme Court decision Roe v. Wade recognized that the U.S. Constitution protects a person's right to make their own medical decisions —  including the right to terminate a pregnancy — many reproductive health advocates agree that reproductive rights are being whittled away under the weight of right-wing attacks. Despite abortion being technically legal in the country, Republican legislators have done an excellent job at the state level making reproductive healthcare harder to access.

Bucking a red-state trend, New York state legislators passed a bill granting women the right to abortions under the state's public health law, instead of penal law. The bill was passed into law on Tuesday, marking the 46th anniversary of the 1973 Supreme Court decision.

The legislation, known as the Reproductive Health Act, updates the state's abortion laws for the first time since 1970. It will allow abortions to be performed by an authorized practitioner within the first 24 weeks of pregnancy, or if the fetus isn’t viable, or at any time if patient's life or health is at risk.

The measure comes partly as a reaction to the confirmation of Supreme Court Justice Brett Kavanaugh last October. Abortion opponents hope Kavanaugh would provide the fifth vote on a court decision to overturn or weaken Roe v. Wade. The Center for Reproductive Rights warned that if Roe v. Wade is overturned, 22 states are likely to ban abortion outright.

In an interview with Salon, Dr. Leana Wen, president of Planned Parenthood Federation of America, a group that lobbied against Kavanaugh's appointment, called New York's passage of the Reproductive Health Act an "important example of how states are the critical backstop at this time when we face an administration on the federal level that is extremely hostile to women’s health and rights."

"We need states, like New York state, to step up," she added. "I hope that lawmakers across the country will look to New York and to other states to repeal bad policies that restrict access and do everything they can to protect access and expand the right to reproductive healthcare, which is healthcare."

The state's move will remove abortion language from the penal code and establish a right to the procedure under the public health laws. The passage of the Reproductive Health Act in New York will ensure abortion access remains in place even if the Supreme Court reverses or weakens the 1973 decision. Abortion rights advocates hope the legislation will spur similar measures across the country. States including Rhode Island, Maryland, Massachusetts and New Mexico are expected to pass similar bills, while in California, Gov. Gavin Newsom committed to investing $100-million for reproductive healthcare.

"I'm flying a little bit. It kind of feels like I'm able to exhale for the first time in a really long time," Planned Parenthood of New York City activist Kim Furano, who went to cheer on the signing Tuesday at the state legislature, told Salon. "I was just in the assembly and I got to hear my representative give this sort of wonderful, impassioned speech about her support of the bill that I had never heard before and I had to wipe tears from my face. I was afraid makeup was running down my face. It feels like a really big day and a really big relief."

Attempts to guarantee a right to abortion under federal law in New York were blocked for years by state Senate Republicans. But the Republican-led Senate lost control of the chamber in November during the 2018 midterm election cycle — and now, with Democrats in control of the Senate by a wide margin, along with the party's longtime command of the State Assembly and Cuomo in his third term, the Democrats were able to codify Roe v. Wade in state law just two weeks into the legislative session, allowing Cuomo to deliver on a promise he made earlier this month to expand the Empire State's abortion laws within the first 30 days of the new legislative session.

"The idea that the New York state legislature would take a stand and set an example is so deeply meaningful to me. It makes me proud to be a New Yorker," Furano said. She revealed that she traveled to Albany several times with Planned Parenthood and other reproductive rights organizations before the midterm elections, and "again and again we were told, even by supportive folks, that there's nothing we can do because the Senate wouldn't bring it to the floor for a vote, which was so discouraging." Furano said she regained hope on Election Night as the Democrats in New York seized control of the state senate for the first time in more than a decade.

The anniversary of Roe v. Wade comes just days after thousands of people again marched in protest of President Donald Trump's administration and equal rights at the 2019 Women's March. As with the first iteration of the demonstration, which occurred the day after Trump's inauguration in 2017, the mission of the Women's March is to promote increased access to reproductive healthcare services, women's rights, LGBTQ rights, racial equality, freedom of religion, workers' rights, ending violence against minority groups and a host of other causes. For many demonstrators, it's a full-throated cry against Trump, his agenda, and, more generally, a chance to point out that there is still progress to be made toward their mission of equality and tolerance.

"I wish I could say on the 46th anniversary of Roe v. Wade that the battle over women's health and rights is over, but we all know that's not the case," Wen told Salon. "We know that in the next year, one in three women of reproductive age could be living in states where they cannot have the right to get a legal abortion. We know that there are daily attacks by the Trump-Pence administration on reproductive care and rights."

At the same time, however, she noted, "We also have women, particularly women of color, and people from all over the country rising up to say that we need more healthcare and not less; that we understand that reproductive health is part of the full spectrum of healthcare and that healthcare is a human right."

Wen noted that even in "restrictive states," like Missouri, advocates are working to repeal a law that requires women to undergo a pelvic exam before getting a medication abortion. Still, 2018 was "the first in recent year when the number of proactive policies enacted outpaced new restrictions," according to a report from The Guttmacher Institute. Last year,  29 states and the District of Columbia enacted 80 measures that expanded access to reproductive health care.

While Wen noted the threat to safe, legal abortion in the U.S. continues, she said she's "optimistic that with our four millions supporters and growing, with our new champions in Congress and all over the country and legislatures and in state houses that we will continue to fight for the right to safe, legal abortions and for all aspects of healthcare as a human right."