No end in sight: The death of the Robert Mueller myth and the liberal "field of dreams"

Those who longed for a quick, dramatic Trump takedown have seen their hopes crushed. Time to face the truth 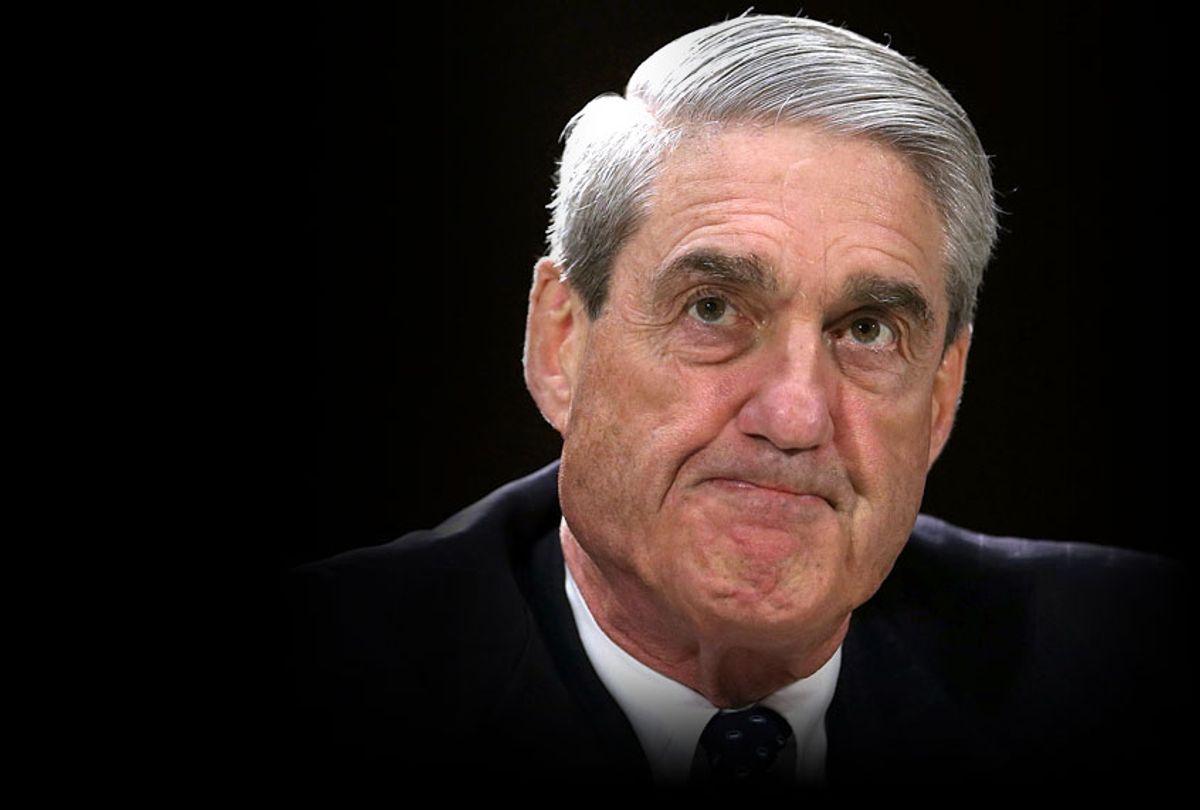 As the news broke that special counsel Robert Mueller has no more indictments or “bombshell” revelations about Donald Trump’s winking collusion with Russia or, possibly, anything else, it took some courage for Vox senior analyst Dylan Matthews to throw cold water on Spike Lee, the New Yorker’s Adam Davidson, Vanity Fair’s Rachel Dodes, reporters at NPR and others who craved a quick, dramatic takedown of Donald Trump because, as Matthews sees it, they had succumbed to “a yearning for something, anything, to end the death loop that American democracy appears to be trapped in — for a big, dramatic blowup to fix the system’s ills. In the liberal imagination, that blowup typically takes the form of Trump’s removal from office, an event that sets us back to a path of normalcy and sane politics.”

Au contraire, Matthews declares, with what some will dismiss as easy hindsight but what I applaud as wisdom (not least because I said the same thing myself in 2016, as Trump was soaring through the Republican primaries): There was very little “normalcy” and “sane politics” coming to Americans from the neoliberal Democratic politics of the Clintons and Schumers and their Hollywood and Manhattan celebrants. Even as they waved banners of United Colors of Benetton “diversity,” they helped Republicans to seed and ride injustices and resentments that drove Trump's victories over both parties' establishments.

At least since Donald Trump first announced his presidential campaign in June 2015, journalists and activists have been asking: Is this the scandal that finally does him in?

Would his casual description of Mexican immigrants as rapists in his announcement speech force him to drop out shortly after he jumped in? Would his attack on John McCain for being captured in Vietnam end his campaign? What about mocking a disabled New York Times reporter? Or lying and saying Muslim Americans in Jersey City celebrated the 9/11 attacks? Or proposing an all-out ban on Muslim immigration?

What about the revelation of a tape where he brags about sexually assaulting women? Or the stories from multiple women who said he did, in fact, sexually assault them? Or leaking highly classified information to the Russian government? Or ordering FBI Director James Comey to close his investigation into former National Security Adviser Michael Flynn and then firing Comey when he refused? Would any of these be enough to finally bring Trump down?

As it turns out, the answer in each case was no.

Not even the New York Times’ admirable, extensive reports on Trump’s taxes and his snookering of Deutsche Bank into hundreds of millions of dollars of bad loans was enough.

Matthews writes that Trump is not the cause of our civic implosion but a carrier and casualty of the ethos of casino-like financing and predatory marketing that is generating that implosion for all of us. He counsels us to avoid moralistic flights from that reality and to dig in and "muddle through" a lot of “heavy political lifts, most of which will fail, and each of which on its own would only mildly improve matters if adopted. We should abolish the filibuster and Electoral College. … We should adopt the Fair Representation Act to end gerrymandering and move toward proportional representation. We need a robust right to vote in the Constitution, public financing for elections, and more transparency for corporate and nonprofit political spending.”

But Americans have been bludgeoned and blandished so relentlessly and intimately by the “regime” of irresponsible financing and predatory marketing I've mentioned above that millions of us are as weak, by democratic or republican measures, as many Americans were in the 1770s, when the republic’s founders doubted openly that the people had the reason and discipline that “muddling through” demands.

“A republic – if you can keep it,” Ben Franklin is said to have told a bystander outside Philadelphia’s Independence Hall who asked him what kind of government was being created. That “if” was only the beginning.

As soon as King George III was gone, the founders took a hard look at the American people and became obsessed with how a republic ends. History showed them it could happen not with a coup but a smile and a friendly swagger, as soon as the people tired of the burdens of self-government and could be jollied along into servitude -- or scared into it, when they’d become soft enough to intimidate.

"History does not more clearly point out any fact than this, that nations which have lapsed from liberty, to a state of slavish subjection, have been brought to this unhappy condition, by gradual paces," wrote founder Richard Henry Lee.

Even as Franklin cast his vote for the new Constitution, he told his fellow delegates that it "can only end in Despotism as other Forms have done before it, when the People shall have become so corrupted as to need Despotic Government, being incapable of any other."

Alexander Hamilton sketched what was at stake by writing, in the Federalist Papers, that history had destined Americans, "by their conduct and example, to decide the important question, whether societies of men are really capable or not of establishing good government from reflection and choice, or whether they are forever destined to depend for their political constitutions on accident and force."

Many founders were reading Edward Gibbon's then-new account of how the Roman republic had slipped, degree by self-deluding degree, into tyranny as its leaders bedazzled citizens out of their liberties by titillating and intimidating them into becoming bread-and-circus mobs that "no longer possessed that public courage which is nourished by the love of independence, the sense of national honor, the presence of danger, and the habit of command.”

Gibbon added pointedly that Augustus, the first emperor, "wished to deceive the people by an image of civil liberty, and the armies by an image of civil government" and that he knew that "the senate and people would submit to slavery, provided they were respectfully assured that they still enjoyed their ancient freedom." His account of how cravenly the senators did submit is unforgettable – and it should terrify us now.

John Adams wasn't blaming only government when he warned, "When the people give way, their deceivers, betrayers, and destroyers press upon them so fast, that there is no resisting afterwards. The nature of the encroachment upon the American Constitution is such as to grow every day more and more encroaching. … The people grow less steady, spirited, and virtuous, the seekers more numerous and more corrupt, and every day increases the circles of their dependents and expectants, until virtue, integrity, public spirit, simplicity, and frugality become the objects of ridicule and scorn, and vanity, luxury, foppery, selfishness, meanness, and downright venality swallow up the whole society."

The founders believed that, as historian Gordon Wood has put it, “It was not force of arms which made the ancient republics great or which ultimately destroyed them. It was rather the character and spirit of their people. ... ‘Thus, before a nation is completely deprived of freedom, she must be fitted for slavery by her vices.’ (Pinkney’s Wmsg Va. Gazette, 1775.)”

Some of us witnessed and even contributed a little something to the republican character and spirit of the American people in the antiwar and civil rights movements of the 1960s. But many Americans seem to imagine such movements won great victories with, for example, Martin Luther King Jr.’s “I Have a Dream” speech at the magnificent 1963 March for Jobs and Freedom on the Washington Mall. We tend to bracket, with little more than a sentimental bow, the many decades of heavy lifting, slogging and defeat that produced that moment on the Mall.

Right though Matthews is to remind us that there's no alternative to such work, I have a modest insight to add to his invaluable admonitions. It’s that our inclination and ability to sustain “heavy lifting” comes not only from hard-earned civic discipline but also from civic inspiration through public myths or story lines that the American theologian Reinhold Niebuhr called “emotionally potent over-simplifications” -- constitutive fictions that are as necessary as a legal constitution itself.

Matthews notes rightly that people’s cravings for such narratives often lead them astray, especially when they’re feeling dispossessed, humiliated and desperate enough to cling to fictions as empty and hypocritical as Trump’s “Make America Great Again.” He notes rightly, too, that liberal Trump opponents have grasped at the Mueller ex machina myth and at the successive revelations of scandal that preceded it, as if these alone could counter the power and seductions of Trump’s demagoguery. Yet we’ll never get away from needing better myths, as I suggested in a short column for the Bill Moyers & Co. website about our civic implosion after Trump's inauguration.

Hopes ran high then that Americans would find it in ourselves and in our legal system to eject him before 2020. Now we can only hope that enough of us have enough republican “character” to look past “bombshells,” real or imagined, vote him out in 2020, and -- more important --  create what Matthews calls “a political order” as “radically new” as the one Americans created and ratified after they ejected King George.