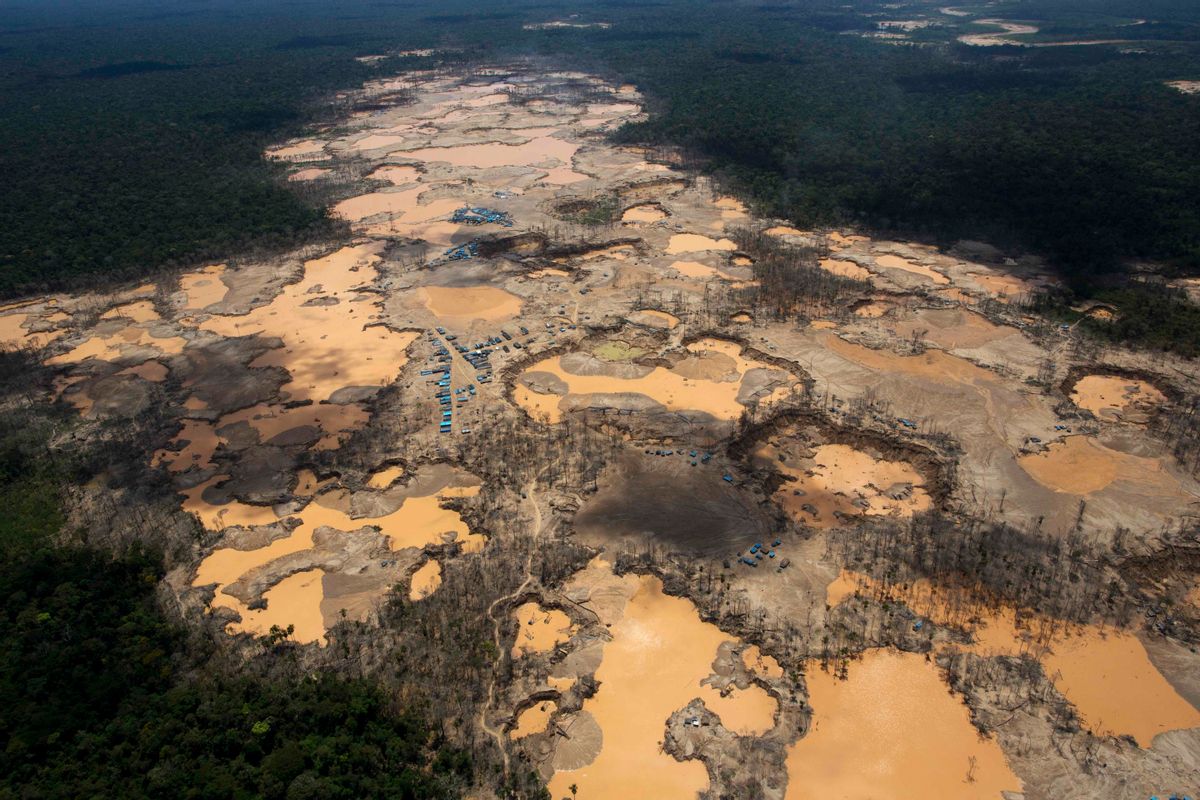 FILE - This Nov. 11, 2014 file photo shows a deforested area dotted with blue tarps, marking the area where miners reside, and craters filled with water, caused by illegal gold mining activities, in La Pampa, in Peru's Madre de Dios region. Peru's government declared an emergency across a broad jungle region because of mercury contamination, much of it caused by wildcat gold mining. Photographer Rodrigo Abd of The Associated Press and three other journalists in Brazil, Colombia and El Salvador won the 2016 Maria Moors Cabot Prize, which recognizes excellence in coverage of Latin America and the Caribbean. (AP Photo/Rodrigo Abd, File) (AP)
--

Dark money, a term usually applied to opaque political donations, is also a serious problem for our planet’s biodiversity. The 2016 release of the Panama papers, hailed as “history’s biggest data leak,” was followed less than two years later by an even larger document dump called the Paradise Papers. These events revealed the secrets of how the rich and well-connected exploit legal loopholes and international tax havens to protect their wealth. But an investigation into the data by Victor Galaz and his colleagues from the Stockholm Resilience Center highlights just how the shadowy corners of the global economy extend into the protein on our plates and the air we breath

The political and economic ramifications of the papers, and tax havens in general, has been relatively well-studied. But Galaz and his team were most interested in the environmental consequences of our opaque global financial system. They used publicly available data from the International Criminal Police Organization (INTERPOL) and other sources to uncover how secret financial dealings fuel two major conservation threats: overfishing in the world’s oceans and deforestation of the Brazilian Amazon.

Illegal, unreported, and unregulated (IUU) fishing is a serious cause of declining fish populations worldwide. This illicit industry, accounting for up to $23.5 billion per year, is also a substantial contributor to the global economy—making it ripe for corruption. Galaz and his colleagues found that 70 percent of fishing vessels involved in IUU fishing are registered in tax havens, mainly Belize and Panama. By contrast, just 4 percent of all legally registered fishing vessels originate in tax haven nations.

Registering a fishing boat in a tax haven isn’t a crime, per se. The problem is that Belize, Panama, and many other tax haven countries are also “flags of convenience” states. These are countries with lax or nonexistent law enforcement, making them attractive to shipowners who want to use their vessel for illegal fishing. A ship registered in a FOC state can easily escape the regulations that prevent environmentally destructive activities, like surpassing catch quotas or taking endangered species. IUU fishing can also have downstream effects on seabird, turtle, and other wildlife populations.

Galaz and colleagues also examined the connections between tax and Amazonian deforestation. They used publicly available data from the Central Bank of Brazil to track foreign investment in Brazil’s soy and beef industries, which are responsible for much of the deforestation in this region of the Amazon.

They found that 68 percent of foreign investment into the nine biggest soy and beef companies between 2000 and 2011 — worth $18.4 billion — was funneled through tax havens. The magnitude of shadowy investment into these two rainforest-destroying sectors is strikingly disproportionate to the total amount of foreign investment flowing through tax havens into Brazilian industry generally — which was just 17 percent in 2011. And almost all of the dark soy and beef money entering Brazil originated in the Cayman Islands, one of the most notorious tax havens in the world.

One shortcoming of this study, as the authors note, is that it is currently impossible to prove that this foreign investment from tax havens is directly causing deforestation. As the Panama and Paradise Papers showed, the global financial market is a tangled web of secret transactions and offshore bank accounts, which makes tracking money from a foreign source to specific local expenditures challenging.

However, it’s not hard to make a logical connection between tax evasion and Amazonian destruction. Less money paid in taxes means a company has more funds available for business costs. In the soy or beef industry, this means greater expanses of tropical forests clear-cut and converted to pasture and crop land. Poor government oversight contributes as well. Enforcement of environmental laws in Brazil has relaxed in the past couple of years, and even beef companies that have committed to stop deforestation on paper cleared some 32,000 square miles of the Amazon for pastureland between 2010 and 2015.

I’ve been studying and working in biodiversity conservation for almost a decade, and before reading this study, I thought I understood the global drivers of biodiversity loss. Had someone previously asked me whether our current opaque global financial system was in the top five, I might have said no. But I was wrong. We’re just now beginning to learn how closely the financial industry enables dubiously legal — and flat-out illegal — environmental destruction.

In many ways, this problem is just another form of the age-old tragedy of the commons: One person or company profits by taking more than their share of resources at the expense of everyone else. Unfortunately there’s a lot at stake: The collapse of vast marine and tropical forest ecosystems would have catastrophic consequencesfor humanity.

The saving grace for biodiversity is that improved financial transparency is possible. Policy changes, like a proposed law requiring British territories — like Bermuda and the Cayman Islands — to publicly list the owners of international companies registered in these states would be a good first step toward stopping tax evasion. And it would have a myriad of other political, economic, and social benefits too, like decreasing economic inequality and mitigating the human costs of climate change. All the more reason to work toward shedding a light into the dark corners of the world economy.