"As the week goes on, it just seems like the smell of a whitewash and a cover-up is getting thicker and thicker" 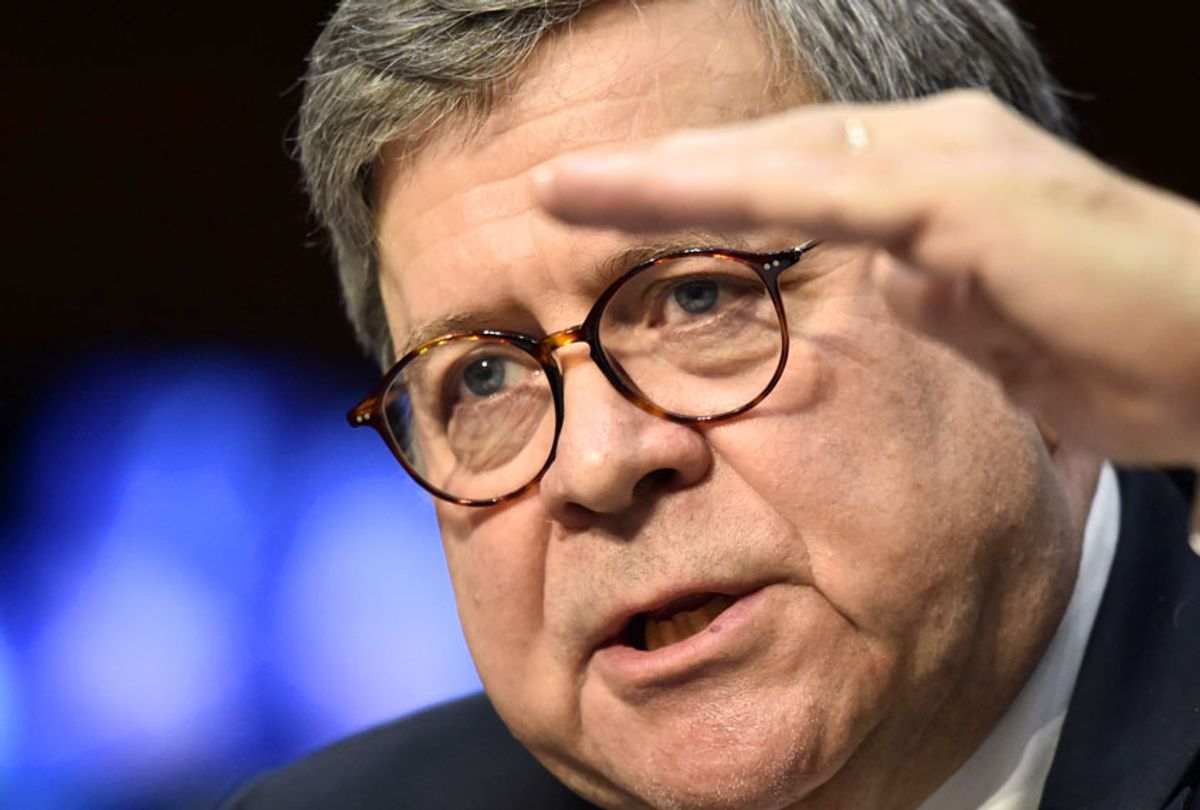 Top Democrats are troubled Attorney General William Barr will not commit to releasing special counsel Robert Mueller's full and unredacted report of his nearly two-year investigation into whether President Donald Trump's 2016 campaign colluded with Russia to influence the outcome of the election.

Mueller announced the completion of his investigation into the president's campaign and foreign election interference last week. Attorney General William Barr on Sunday submitted a four-page summary of the special counsel's report to Congress, in which he indicated that the special counsel had not found evidence of criminal collusion or conspiracy between Trump's presidential campaign and Russia during the 2016 election cycle. Barr noted that while Mueller's report "does not conclude that the president committed a crime, it also does not exonerate him." Still, Trump has appeared to celebrate Barr's letter, claiming it was a "total and complete exoneration."

Democrats, meanwhile, have dismissed Barr's summary of Mueller's report, arguing it is incomplete and insufficient. They have zeroed in on Mueller's decision to punt on whether Trump had obstructed justice, which Barr said "leaves it to the attorney general to determine." Barr said he and Deputy Attorney General Rod Rosenstein concluded Mueller's findings were "not sufficient to establish that the president had committed an obstruction-of-justice offense," which Democrats say warrants further examination and the release of the full report.

Barr is not required by the regulations governing the special counsel to notify Congress of more than "brief notifications, with an outline of the actions and the reasons for them." His four-page overview of Mueller's report dealt a blow to Democrats, who had hoped the special counsel's account of his wide-ranging probe into the president's campaign and election meddling would bolster their wide-ranging investigations into Trump and his business dealings.

"I have said, and I'll say again, 'No thank you, Mr. Attorney General. We do not need your interpretation. Show us the report and we can draw our own conclusions. We don't need you interpreting for us,'" Pelosi said at her weekly news conference. "It was condescending, it was arrogant and it wasn't the right thing to do. The sooner they can give us the information, the sooner we can all make a judgment about it."

Rep. Jamie Raskin, D-Md., a member of the House Judiciary Committee, on Thursday slammed McConnell for twice blocking Senate resolutions that called for Mueller's full report to be made public. She also criticized the attorney general, who is reportedly likely to miss an April 2 deadline set by six Democratic committee chairs in the House for the Justice Department to provide an unredacted copy of Mueller's full report to Congress.

"They were able to come to a conclusion about the ultimate legal question raised about whether there was obstruction of justice overnight, and yet they're not able to actually just turn over the physical report to us within one week," Raskin told CNN. "And that's just not acceptable."

"As the week goes on, it just seems like the smell of a whitewash and a cover-up is getting thicker and thicker," he added.

"We need to know what happened, and we need to correct the record," Raskin said. "Because all we have right now is that four-page press release that the attorney general put out at the beginning of the week."

Rep. Jerry Nadler, D-N.Y., the chairman of the House Judiciary Committee who has openly challenged Barr's conclusion regarding evidence of obstruction of justice, told reporters Wednesday that he's "very concerned that is apparent that the Department [of Justice] will not meet the April 2 deadline that we set, and I'm very disturbed by that."

"I asked him when we would see it, and he couldn't get specific," Nadler continued. "He said weeks – not months – as we've heard before."

The head of the House Judiciary panel, who told reporters the April date is a "hard deadline," did not vow to subpoena Mueller and Barr to push for full disclosure, although Democrats have threatened to use such powers if their requests are not satisfied by then. "We will wait until after April, and we will make those decisions," he said.

Nadler also revealed Barr agreed to testify before his panel "reasonably soon." He noted the attorney general had told him Mueller's report was "very substantial," which he said added to his concern about Barr's summary. "He told me it was a 'very substantial report' — one that, in my judgment, a four-page summary would not begin to do justice to," Nadler said.

"The special counsel, Mueller, spent 22 months investigating this, and these are some of the central questions before the United States Congress and the American people. And it is unacceptable if we don't — the Congress, certainly, and the American people — don't see the full report. And he wouldn't commit to that," Nadler told reporters. "We are not happy about that, to put it mildly."

Sen. Richard Blumenthal, D-Conn., a member of the Senate Judiciary Committee, said he did not trust Barr's summary of Mueller's findings. "The issue here is not just whether there was complicity [in Russia's election interference] that rose to a criminal level," Blumenthal told CNN on Tuesday. "It is about obstruction of justice — no exoneration there — and the judgment by William Barr may have been completely improper."

"I do not deeply respect and trust the Barr summary, which was designed to frame the message before the information was available," he added. "And he succeeded in creating headlines."

Blumenthal said a June 2016 campaign meeting Trump campaign officials attended with Russians at Trump Tower, set up with the promise of obtaining "dirt" on Democratic challenger Hillary Clinton, was itself proof of collusion. He noted that Barr, a Trump appointee, previously criticized the obstruction theory that Mueller appeared to be pursuing as "fatally misconceived" and defended that position to lawmakers during his confirmation hearings. (Barr, in his letter, said he and Deputy Attorney General Rod Rosenstein determined, without considering longstanding Justice Department guidelines that sitting presidents cannot indicted, that Mueller's findings were "not sufficient" to prove if Trump had obstructed justice.)

Former Georgia gubernatorial candidate Stacey Abrams, a rising star in the Democratic Party who is rumored to join former Vice President Joe Biden's running mate in 2020, on Monday said Barr's review of Mueller's report was "like having your brother summarize your report card to your parents." "We should be deeply suspicious, especially since he had 12 tardies and at least three times ditching class," Abrams continued, adding that Barr is an "avowed partisan who, in part, auditioned for the job by disparaging the report."