The people of Palestine are on the march

March 30 is Land Day, an annual commemoration of the struggle against the Israeli occupation 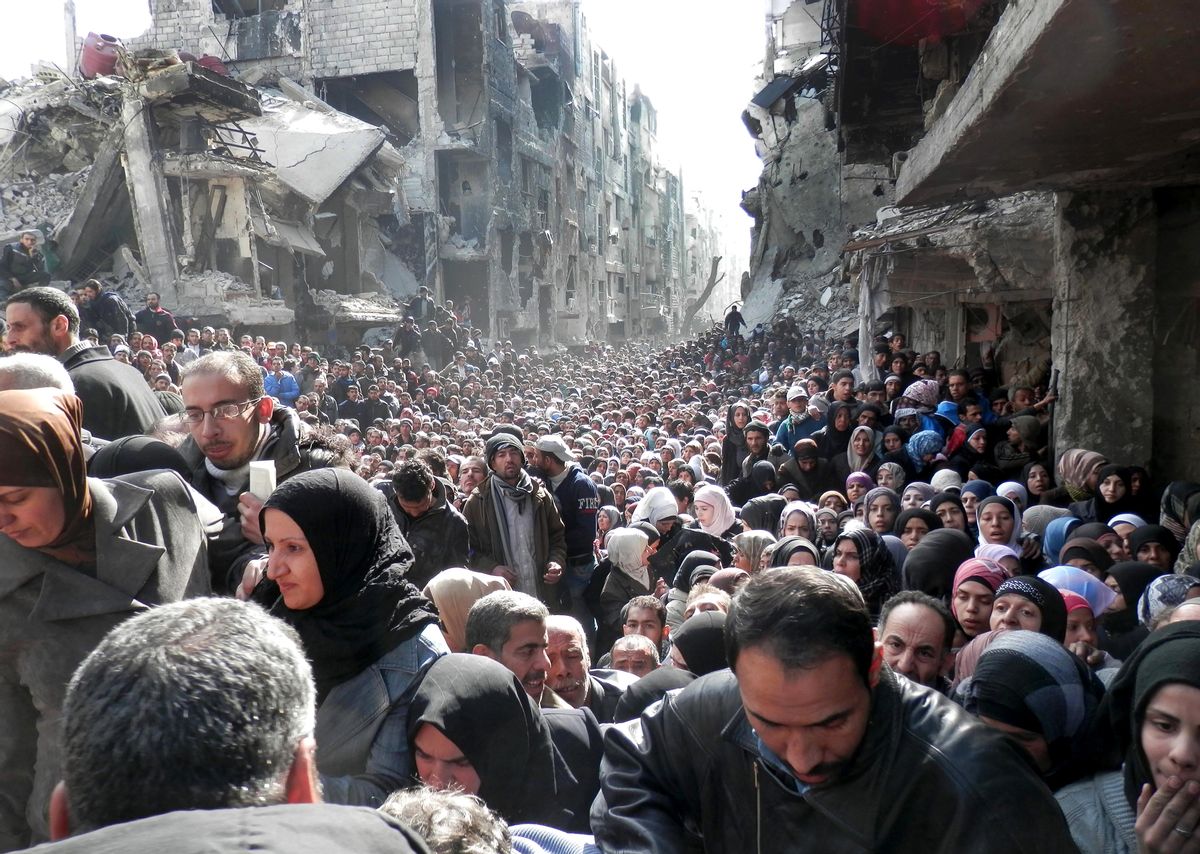 FILE -- In this Jan. 31, 2014, file photo, released by the United Nations Relief and Works Agency for Palestine Refugees in the Near East (UNRWA), shows residents of the besieged Palestinian camp of Yarmouk, queuing to receive food supplies, in Damascus, Syria. In one besieged neighborhood after another, weary rebels have turned over their weapons to the Syrian government in exchange for an easing of suffocating blockades that have prevented food, medicine and other staples from reaching civilians trapped inside. The government touts the truces as part of its program of national reconciliation to end Syrias crisis, which has killed more than 140,000 people since March 2011. (AP Photo/UNRWA, File) (AP)
--

The bombs start again. Israel, as if on a timer, begins to pulverize Gaza. The bombs strike from one end of the country to another, a warning against the protests that have been ongoing for a year. There is a shudder from Gaza, phone calls to friends who say that they are fearful that this bombing run will escalate. Nothing is beyond Israel’s Benjamin Netanyahu, who will use these bombs as an advertisement for his campaign to be reelected as Israel goes to the polls on April 9. The phone lines carry the sound of scared children and anxious adults, a building demolished, the warplanes shrieking overhead.

In January of last year, the Palestinian journalist Ahmed Abu Artema sat at his computer in his home in Rafah (Gaza, Palestine). He had just returned home from a walk in this 365-square-kilometer (141-square-mile) enclave that sits on the Mediterranean Sea. There is a hint of paradise in Gaza — the sea on one side, the citrus groves on the other. But the entire piece of land — populated by 2.2 million Palestinians — is hemmed in by the Israeli occupation. The land is dotted with barbed wire fences and ditches, with armed guards on alert to shoot where and when they will, and the sea is patrolled by Israeli naval vessels, which routinely stop and arrest Palestinian fishermen. Paradise is encircled by barbed wire and gunboats. Abu Artema decided to write a plea.

“No one stopped the birds,” he thought during his walk as he saw a flock of birds fly across the perimeter fence. The Israeli occupation, he felt, “clips my wings” and “disrupts my evening walks.” What if a Palestinian from Gaza decided to “see himself as a bird and decides to reach a tree beyond the fence,” he mused? “If the bird was Palestinian, he would be shot.”

So, this journalist — a father of four young children — wrote the following simple question: “What would happen if thousands of Gazans, most of them refugees, attempted to peacefully cross the fence that separated them from their ancestral lands?” The answer, plainly, was that they would be shot.

In 1976, the Israeli government announced the seizure of 20,000 dunams of land in the Galilee. The government declared a curfew so that it could proceed with the land theft without protest. It miscalculated. Pressure grew from below, so Tawfiq Ziad — the mayor of Nazareth (the largest Palestinian city inside Israel’s 1948 lines) — called for a general strike. The strike on March 30, 1976, was almost total, with the Israeli State reacting to it with ferocity. The land was seized, but March 30 became a monumental day, Land Day, an annual commemoration of the struggle against the Israeli occupation.

Abu Artema’s plea made in January 2018 became real on March 30, 2018, when the Great March of Return began. The initial plan was to start the protests on Land Day and then continue until May 15, the day to commemorate the Nakbaor the expulsion of the Palestinians from their homeland in 1948. But the energy opened up by the Great March of Return could not be contained. This protest, held each Friday, began with 30,000 Palestinians on Land Day in 2018 and continues with tens of thousands of Palestinians each week.

When Abu Artema took to his Facebook page, he would not have been able to drink water — even if boiled — from his tap. That month, the Palestinian Water Authority warned that 97 percent of Gaza’s water was undrinkable because of high levels of sewage and salinity. It was lucky that Abu Artema was able to get on Facebook. Gaza only gets power for about four hours per day. The Israelis blame the Hamas government in Gaza for these problems. Such a story is only possible for someone with no memory.

In each of the punctual bombings of Gaza since Operation Hot Winter (2008), Israel has targeted Gaza’s power plant and its water sources (wells, water towers, sewage pipelines and sewage treatment plants). Millions of dollars of damage are done to Gaza’s infrastructure, which then cannot be repaired because Israel prevents materials from entering the enclave. Because of the Israeli bombings and Israeli embargo, Gaza, the United Nations has found, will become “uninhabitable by 2020.”

It is no wonder the Great March of Return has seen such large crowds, so many people — including children — coming to the fence each week despite the Israeli snipers and the tear gas. Palestinians set up tents out of range of the snipers so that they could feed the protesters and heal them. The destruction of infrastructure put a heavy burden on Palestinian women, which deepened their political commitment and brought them to set up and work in these encampments.

Medical personnel and journalists would be on hand, thinking that their professions gave them immunity. It did not. The Israeli snipers fired at them: two journalists were killed, 184 journalists injured; three medics were killed, 181 medics injured. Hind Khoudary, a journalist, said that her work has been “more than [a] nightmare. I would have never imagined I would see people shattered into pieces.”

According to the Palestinian Ministry of Health, 196 people have been killed by the Israeli armed forces, while 11,427 people have been wounded (over 500 of them are in serious condition, with at least 300 having had at least one leg amputated). The United Nations office in Palestine (OCHA) says that the number of injured is double this—23,603 from March 30 to the end of December 2018.

Last year, as the violence by Israel on the Gaza perimeter fence escalated, the United Nations’ Human Rights Council set up a panel of inquiry (comprised of Argentina’s Santiago Canton, Bangladesh’s Sara Hossain and Kenya’s Kaari Betty Murungi). On March 18, the panel submitted its report. Israel’s government, which did not cooperate, rejected the report. The report found that there were “reasonable grounds to believe that Israeli snipers shot at journalists, health workers, children and persons with disabilities, knowing they were clearly recognisable as such.” The Chair of the panel, Santiago Canton, went further, saying that the panel “has reasonable grounds to believe that during the Great March of Return, Israeli soldiers committed violations of international human rights and humanitarian law. Some of these violations may constitute war crimes or crimes against humanity and must be immediately investigated by Israel.”

So, there it stands. The international community’s panel says that war crimes were committed, but the legal framework stops at the borders of Israel. Must be immediately investigated by Israel. But Israel will do no such thing. It has rejected the panel and its findings. There will be no investigation of the war crimes beyond what the panel has found. Instead, Israel has begun to bomb from the sky.

Israel will hold an election on April 9, a little more than a week after the first anniversary of the Great March of Return. On the anniversary itself, tens of thousands of Palestinians are expected to walk towards the perimeter. Last Friday, on March 22, Israeli soldiers killed Nedal ’Abdel Karim Ahmed Shatat (age 29) and Jihad Munir Khaled Hararah (age 24). Israeli tear gas canisters flew into the medical field station at Bureij Refugee Camp. About 181 Palestinians were injured on that day. This shows that neither the Palestinian protesters nor the Israeli soldiers will back down.

Israel’s government is undaunted by the UN findings. The Palestinians have no choice but to protest. The confrontation will escalate on the first anniversary of the March. The Israelis will be harsh, harsher to give Benjamin Netanyahu the kind of muscular response that allows him to bully his way back to power.

Abu Artema’s birds — perhaps they are terns or gulls — continue to fly back and forth. They emerge out of the poems of Mahmoud Darwish, the poem that asks, Where should we go after the last frontiers? Where should the birds fly after the last sky? Palestinians will remain in this vast congested open-air prison called Gaza, hemmed in and forgotten, bombed once more, mercilessly.