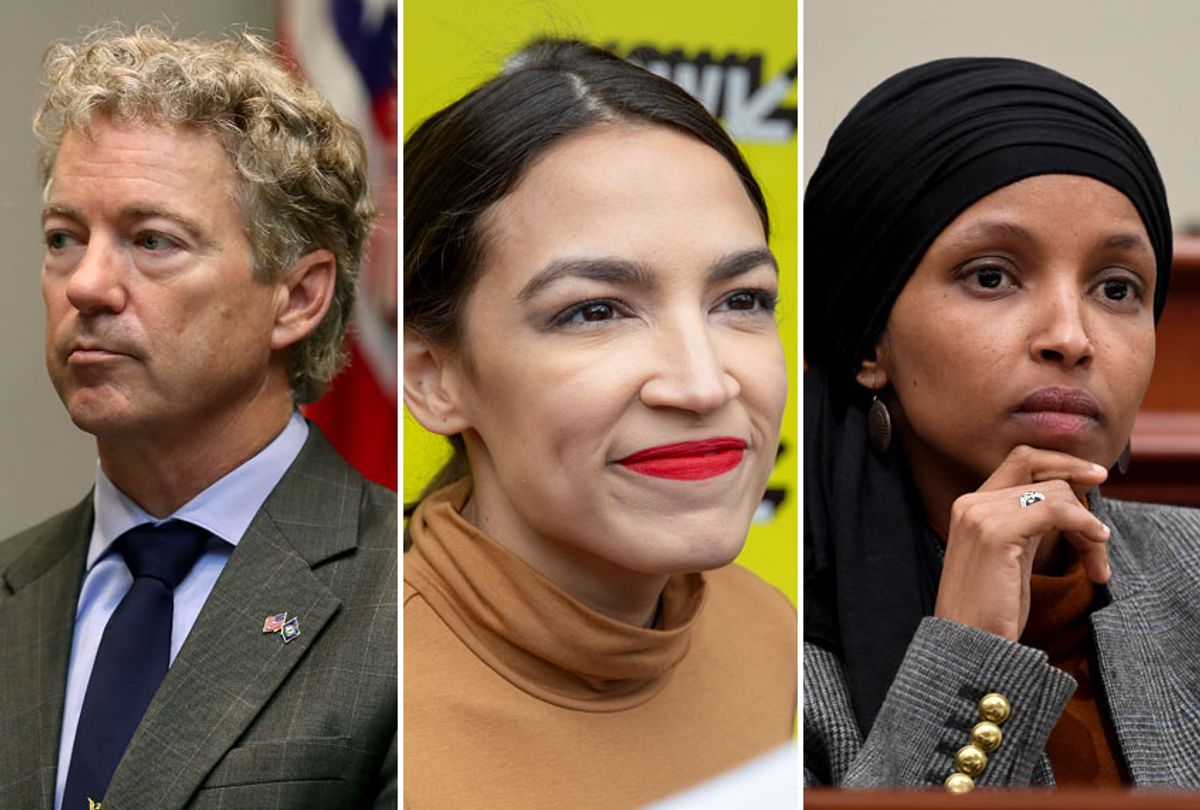 Sen. Rand Paul, R-Ky., has teamed up with progressive freshmen Reps. Alexandria Ocasio-Cortez, D-N.Y., and Ilhan Omar, D-Minn., to offer President Donald Trump rare bipartisan praise from conservatives and progressives across the political spectrum for his promise to pull U.S. troops from Afghanistan and Syria — a topic under intense scrutiny from most Republicans on Capitol Hill.

The unexpected trio and a group of ten other lawmakers wrote Trump on Wednesday to offer their "bipartisan support of your announcement of the start of a 'deliberate withdrawal' of U.S. military forces in Syria," according to a letter sent to the president. "We welcome the completion of this process within the next six months," the group added.

The lawmakers argued the 2015 deployment of U.S. military forces violated "the Constitution and the 1973 War Powers Resolution," because Congress never authorized the use of military force against Syria. They also urged the president to change course and end the war in Afghanistan.

"We believe that the stated intention of withdrawing our forces is appropriate, and we look forward to the orderly return of our service members from this theater of conflict," they wrote.

"It is long past time to rein in the use of force that goes beyond congressional authorization, and we look forward to pursuing this longstanding bipartisan objective with your administration," the lawmakers added. "We hope this will serve as a model for ending hostilities in the future — in particular, as you and your administration seek a political solution to our involvement in Afghanistan."

The letter was led by Paul and Rep. Ro Khanna, D-Calif., and signed by a variety of lawmakers who span the political spectrum on Capitol Hill. Republicans, including Sen. Mike Lee of Utah and Reps. Thomas Massie of Kentucky, Jeff Duncan of South Carolina, Paul Gosar of Arizona and Andy Briggs of Arizona, signed the letter. Democratic Reps. Ocasio-Cortez, Omar and Ted Lieu of California also added their signatures.

Republicans in Congress ripped Trump after he made the surprise announcement in December that he would would withdraw all 2,000 American troops from Syria and cut in half the number of U.S. military personnel deployed in Afghanistan.

The president did not consult with his top military commander in the Middle East, General Joseph Votel, before announcing his decision to pull out of Syria on Dec. 19. The four-star general, who heads the U.S. Central Command, publicly criticized Trump's decision to withdraw from Syria. In addition, Defense Secretary James Mattis resigned in disagreement over Trump's plans to withdraw troops from Syria on the heels of the president's December announcement.

The Republican-controlled Senate in early February broke from Trump and voted to denounce his plans to withdraw troops from Syria and Afghanistan. Senators voted 70-26 to pass a resolution sponsored by Senate Majority Leader Mitch McConnell, R-Ky., in favor of keeping U.S. military forces in both countries.

Members of the bipartisan coalition who sent the letter to Trump on Wednesday suggested pressing the president about Syria is about protecting and enforcing the constitutional power of Congress to declare war, known as the War Powers Act. Although the bill passed at the end of the Vietnam War to reaffirm the power of Congress to initiate or escale military powers abroad in light of perceived executive overreach, nearly every sitting president has sidestepped it — from Ronald Reagan in El Salvador and Lebanon to Bill Clinton in Kosovo and Barack Obama in Libya.

"The president cannot pursue a foreign policy agenda without the advice and consent, let alone the support, of the Congress," Khanna said in a statement. "Thanks to Sen. Paul for joining me in bringing an end to these wars. The Constitution isn't partisan."