Do windmills cause cancer? It's important to resist Trump's lies — even the dumbest ones

It's not enough to laugh off Trump's blatantly idiotic falsehoods. They still spread, metastasize and wreak havoc 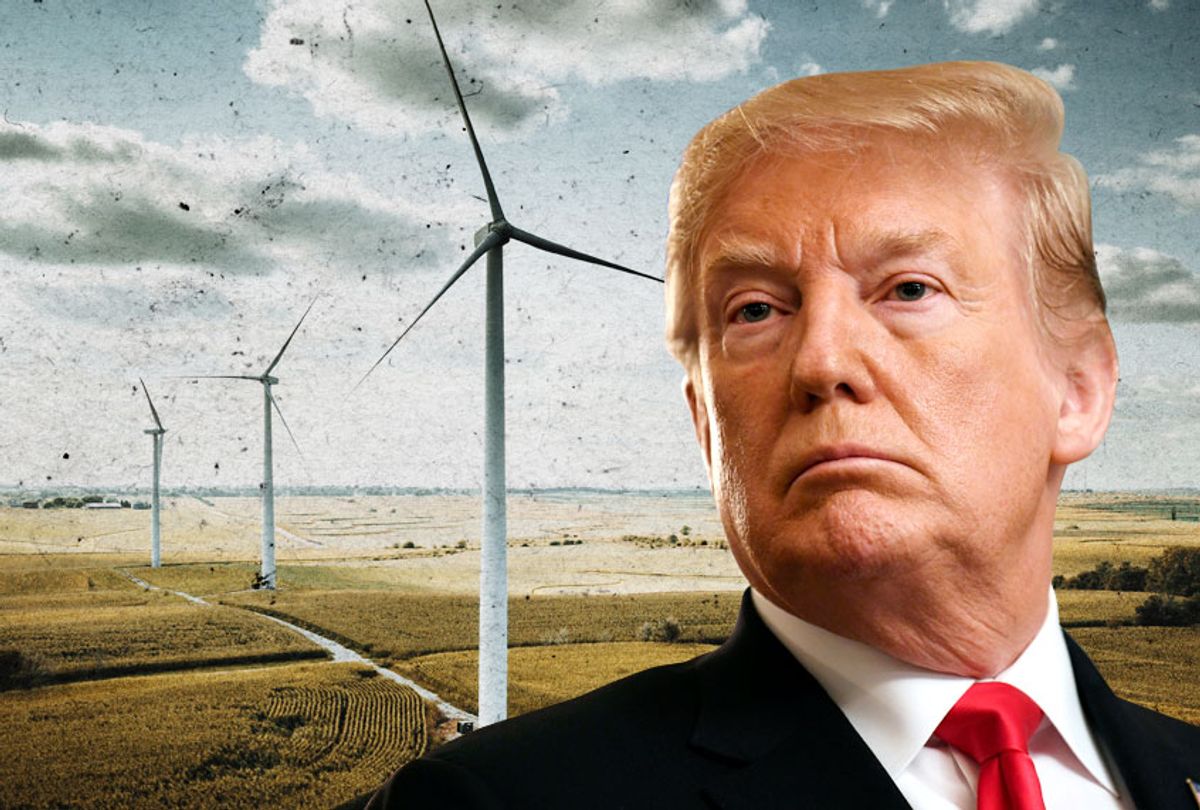 Despite all the vows from progressives not to become numb in the months after Donald Trump's improbable 2016 election victory, two years later it's become undeniable: We're getting numb. That isn't a condition that can be thwarted merely by a show of will. It's more like an unconscious and uncontrolled immune reaction protecting the psyche from the daily bombardment of lies, sadism and bigotry emanating from the White House.

So perhaps we can and should forgive ourselves for what will ultimately be a subdued reaction to Trump bizarre claim that windmills -- or rather wind turbines, which are presumably what he was talking about -- cause cancer. This came during one of the mind-numbing, stream-of-consciousness rants the president tries to pass off as "speeches," this one at a National Republican Congressional Committee dinner on Tuesday.

Trump hates wind power with such dogged intensity that one wonders whether the wind once blew away his Viagra, or exposed his elaborate, sculpted comb-over once too often. But even by his usual mendacious standards, his latest lie was a doozy.

"If you have a windmill anywhere near your house, congratulations, your house just went down 75 percent in value," Trump said. "And they say the noise causes cancer."

The reaction to this is following a certain, now well-worn pattern: First the ridiculousness gets out on Twitter, where the blue checkmarks compete to see who can make the best joke about it. The national news services react by throwing up quick news items with headlines that repeat the lie, and only debunk it as being false in the fourth or fifth paragraph, long after most readers have checked out. The reaction from readers, and perhaps from talk show hosts if they decide to pick it up, tends to center around one sentiment: Christ, what an idiot.

It's not an unfair impulse. Trump's "speeches" do sound, as countless people have noted, like the endless prattle of idiocy streaming out of the mouths of a certain genre of aging white men, encrusted onto their barstools or sunk in their recliners across the nation. Blessed are the few who have made it through life without being cornered by such men, whose stupidity is matched only by their confidence that they are authorities on all things through space and time, and as such have no need to be constrained by considerations like learning about a subject before opining at length about it.

But there's a reason Trump is giving speeches that are broadcast live on C-SPAN, instead of simply ranting about chemtrails to his bored trophy wife in his Manhattan apartment. That's because, whether by design or not, his particular brand of offensive nonsense is extremely effective propaganda. Whether we like  it or not, the man has a real knack for spewing misinformation that is both memorable and perfectly formulated to confuse the issue -- whatever issue may be at hand.

The main tactic Trump uses is simple but surprisingly effective: Take whatever flaws or drawbacks there are to a preferred right-wing policy and make up blatant, outrageous lies that project those flaws onto the liberal alternative.

We see this in action with the windmill rant. The truth of the matter, of course, is that Trump's preferred energy sources — coal and oil — cause disease and destroy the landscape. Oil rigs and coal mines are far more of a threat to natural beauty and property values than wind turbines ever could be, especially since new sources of oil and coal always need to be found, meaning that the damage continues to spread. And, of course, fossil fuel extraction causes massive air and water pollution which in turn leads to numerous health problems, including cancer.

By taking these real flaws of polluting energy sources and projecting them onto clean energy sources, Trump is doing something more than saying, "I know you are, but what am I?" He is injecting a bunch of confusion and noise into the conversation, trying to undermine the very concept of objective truth and encouraging people instead simply to believe whatever is most convenient or most pleasing.

Now the lie that windmills cause cancer is out there, aided by headlines that simply repeat Trump's quote instead of calling it out as a lie. In trying to convince communities to switch from dirty to clean energy, environmentalists rely heavily on appealing to people's desire for beautiful landscapes and good health. Now, when activists try to point out that coal mines hurt the environment and oil-based power plants fill the air with toxins, they're far more likely to get pushback from people claiming that wind energy is somehow just as bad.

And yes, while one side has science on its side and the other absolutely does not, that doesn't matter as much as it should. Most people don't consult the scientific evidence when assessing these kinds of claims. Instead, what they see is one side saying one thing and another side saying another, and they choose to believe whichever side they trust the most. And if they're already conservative, they're going to trust other conservatives more than liberals. Liberals who insist that, no, they have the evidence on their side aren't being particularly helpful. That sounds shrill and defensive and can, perversely enough, backfire and make conservatives even more inclined to disbelieve.

Trump is good at this, as painful as it is for smarty-pants liberals like me to admit that. Tempting as it is to shrug off a lie like this as the incoherent but ultimately unimportant ramblings of an imbecile, the sad truth is that this serious stuff.

There's a not-small chance that long after Trump is out of office and being shoved down the national memory hole, environmentalists who are trying to convince local and state governments to shift toward cleaner energy might find themselves stymied by irrational fears that wind power will lead to cancer. These kinds of lies often take on lives of their own, especially when promoted by Trump, who tosses them off with the ease and confidence of a man unburdened by a moral compass.

Feeling numb, under these circumstances, is normal. But we must will ourselves not to let that feeling of numbness lull us into blowing off the constant stream of lies as inconsequential, or into assuming that everyone sees through them as easily as Trump haters do. Trump does years of damage to the political discourse every day. While it's exhausting to keep on fighting, it's better to fight now by calling out the lies as they happen rather than spending years, or decades, trying to undo the damage after he's gone.