"A lot of little girls and boys are out there watching us tonight, and they're seeing the beginning of something" 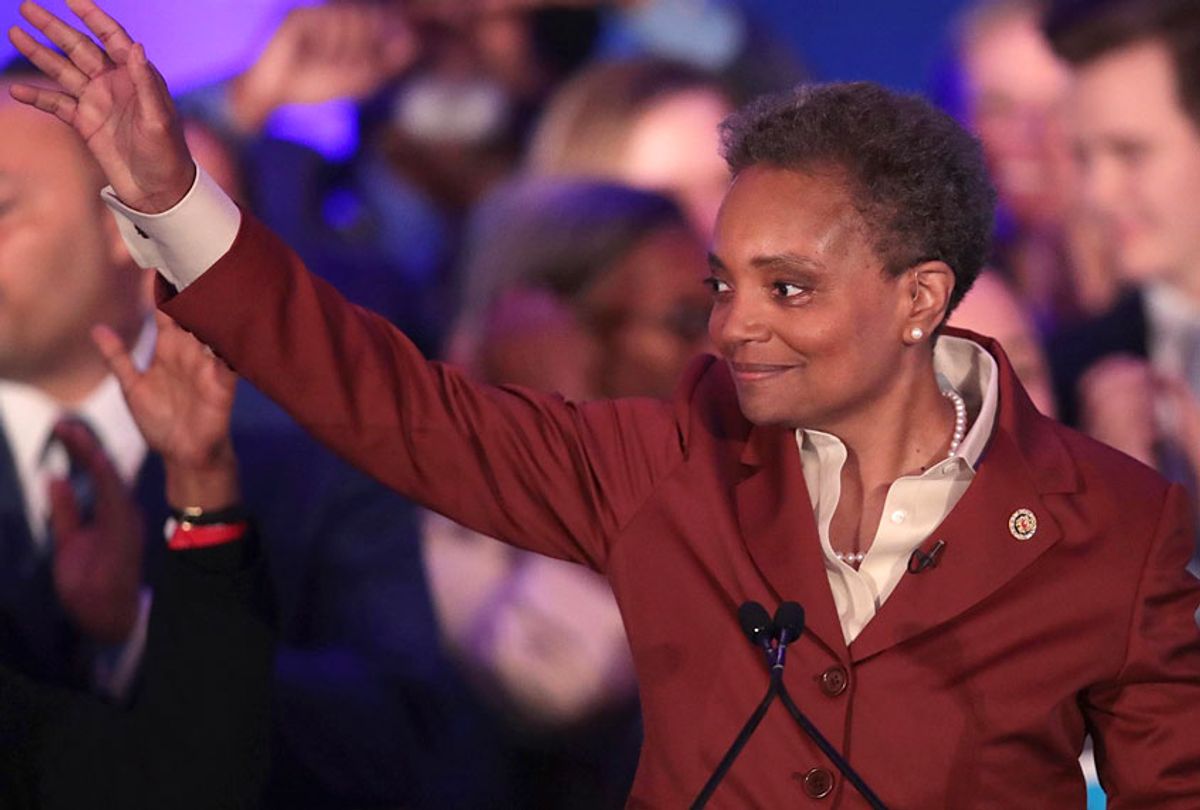 Lori Lightfoot delivers a victory speech after defeating Cook County Board President Toni Preckwinkle to become the next mayor of Chicago on April 02, 2019 in Chicago, Illinois. (Getty/Scott Olson)
--

Chicago voters have elected the first black and openly gay woman to be the city's mayor.

"Today, you did more than make history," Lori Lightfoot told her supporters Tuesday evening. "You created a movement for change."

Voters overwhelmingly chose Lightfoot, an attorney who once served as interim first deputy in Chicago's Department of Procurement Services but who had never held elective public office before. She defeated Toni Preckwinkle, the president of the Cook County Board of Commissions, a veteran elected official who also heads the Cook County Democratic Party, in a runoff election to lead the city.

The Associated Press called the race for Lightfoot less than hour after polls closed, with Lightfoot leading Preckwinkle by nearly 50 percentage points.

Tuesday's contest was bound to be historic, as residents were choosing between two black women, guaranteeing that Chicago would elect its first as mayor.

"In this election Toni and I were competitors, but our differences are nothing compared to what we can achieve together," Lightfoot said. "Now that it's over, I know we will work together for the city that we both love."

Preckwinkle told supporters Tuesday evening that she called Lightfoot to congratulate her.

"This may not be the outcome we wanted, but while I may be disappointed, I'm not disheartened," Preckwinkle said Tuesday evening her concession speech. "For one thing, this is clearly a historic night. Not long ago, two African-American women vying for this position would have been unthinkable. And while it may be true we took different paths to get here, tonight is about the path forward."

Lightfoot and Preckwinkle were the top two vote-getters in the February mayoral race that saw a record 14 candidates vying to succeed Mayor Rahm Emanuel, who announced in September that he would not seek a third term. Preckwinkle came in second in the February contest, garnering 16.1 percent of the vote to Lightfoot's 17.5 percent, triggering a runoff.

Lightfoot will be inaugurated in May. The former federal prosecutor pledged to rid City Hall of corruption, focus on investing in neighborhoods and help low-income and working-class people as mayor. She also said she wants to restore people's confidence in city government.

Lightfoot was endorsed by the Chicago Sun-Times and Chicago Tribune newspapers, as well as Illinois Reps. Jesus "Chuy" García, Robin Kelly and Mike Quigley, according to her campaign website.

Preckwinkle picked up endorsements from several unions, including the Chicago Teachers Union and the Service Employees International Union state council. Illinois Secretary of State Jesse White, as well as Illinois Reps. Jan Schakowsky, Bobby Rush and Danny Davis, threw their support behind the Cook County Board president. Chance the Rapper, a Chicago native, also endorsed her.