Donald Trump takes swipes at Joe Biden amid allegations of unwanted touching: "Are you having fun?"

Trump appeared to revel in the uproar over Biden's alleged treatment of women, despite his own sordid past 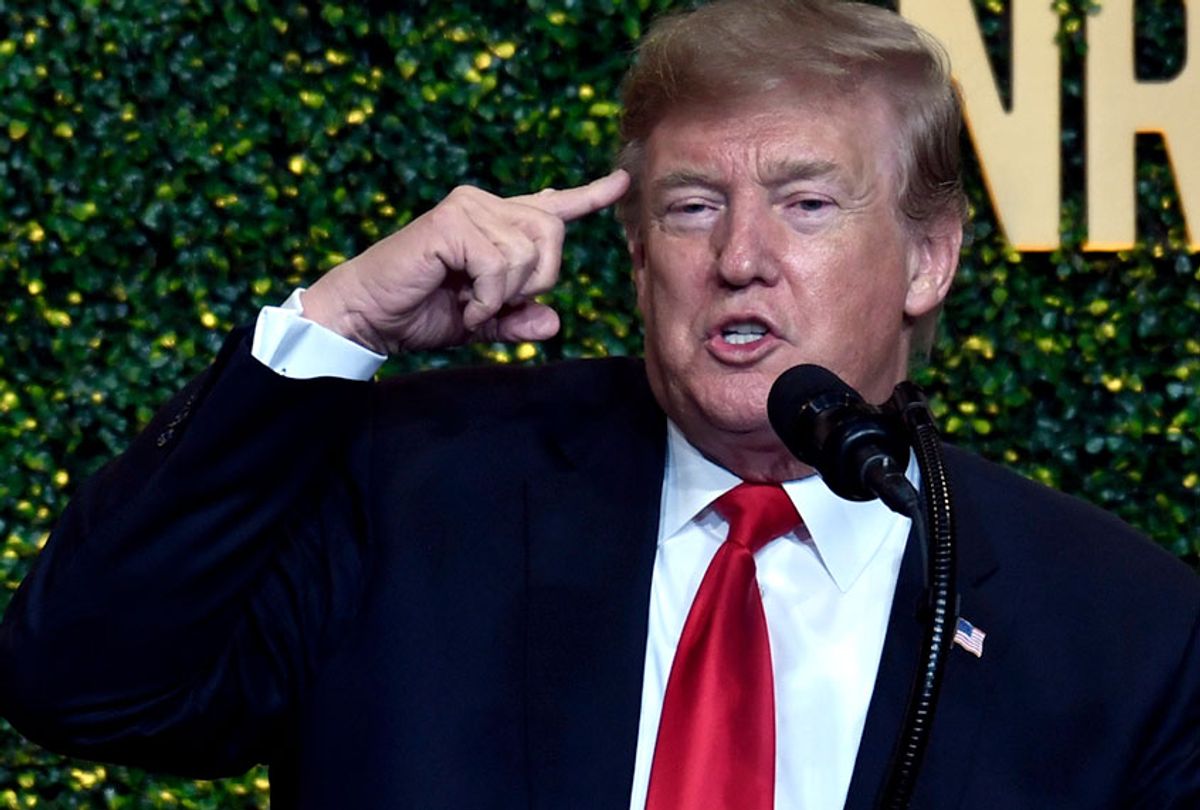 President Donald Trump took swipes at former Vice President Joe Biden, a potential 2020 rival, at the National Republican Congressional Committee's annual spring dinner in Washington over allegations of unwanted kissing and touching made against the Democrat from Delaware in recent days.

"We're going into the war with some socialists," Trump said Tuesday of the field of prospective candidates in the 2020 Democratic primary race. "And it looks like the only non sort of heavy socialist is being taken care of pretty well by the socialists."

The president appeared to revel in the mounting controversy surrounding Biden's past behavior with women, although he himself stands accused.

"They got to him – our former vice president," Trump said, appearing intent on capitalizing on suspicions this week that members of Biden's inner circle are increasingly convinced that Sen. Bernie Sanders, I-Vt., a candidate for the Democratic nomination and a self-proclaimed democratic socialist, might be behind at least one of the recent accusations of inappropriate leveled against the former vice president. (Sanders' campaign has denied any suggestion that the senator or his allies pushed any accuser's story.)

"I was going to call him," Trump continued. "I don't know him well. I was going to say, 'Welcome to the world, Joe. Are you having a good time, Joe?'"

The president's jabs at Biden's past interactions with women comes as the former vice president appears to be on the verge of mounting a bid for the Democratic presidential nomination.

Trump, who himself stands accused of sexual harassment and misconduct by at least 18 women, again took aim at Biden later in his speech as he recalled a time he wanted to kiss a general who provided him with good news about efforts to eliminate the Islamic State in Iraq and Syria (ISIS), saying they could be defeated within a week's time.

"I said, 'General, come here. Give me a kiss.' I felt like Joe Biden," Trump said, prompting laughing and applause from attendees. "But I meant it."

Biden has strongly denied allegations that he acted inappropriately toward women. He issued a sweeping statement on Sunday, saying, "In my many years on the campaign trail and in public life, I have offered countless handshakes, hugs, expressions of affection, support and comfort. And not once — never — did I believe I acted inappropriately."

Former Nevada assemblywoman Lucy Flores on Friday claimed Biden put his hands on her shoulders, smelled her hair and kissed her on the head in 2014 at a campaign rally supporting her bid for lieutenant governor in an op-ed published Friday. Flores said Biden's unwanted contact made her feel uncomfortable and was unacceptable.

"My brain couldn't process what was happening. I was embarrassed. I was shocked. I was confused," she wrote. "There is a Spanish saying, 'Tragame tierra.' It means, 'Earth, swallow me whole.' I couldn't move, and I couldn't say anything. I wanted nothing more than to get Biden away from me." (Flores endorsed Sanders during the 2016 election and served on the board of the Sanders-aligned group "Our Revolution." Biden's camp reportedly believes Sanders' team or his allies are behind the Flores story, which the senator's campaign vehemently denied.)

Flores, for her part, said she was encouraged to come forward now, because she believed Biden's past behavior with women was not being scrutinized as he prepares for a possible presidential run. She argued the former vice president's conduct was "disqualifying" for a presidential candidate in an interview Sunday with CNN.

Lappos said she decided to speak up about her Biden's past behavior in the wake of allegations made by the Nevada Democrat. She noted a major imbalance of power at play in her interaction with Biden, which she claimed had kept her silent due to a fear of being blamed or dismissed.

The allegations against Biden have drawn scrutiny to the former vice president's past public interactions with women and mixed history on women's issues. Critics in recent days have surfaced infamous images of Biden tightly embracing a female reporter from behind and clasping his hands above her waist, whispering into many women's ears and touching women's faces and necks. In a now-viral photograph from 2015, Biden can be seen putting his hands on the shoulders of Stephanie Carter, the wife of former Defense Secretary Ashton Carter, and whispering in her ear. The incident, which occurred during her husband's White House swearing-ceremony, at the time received significant media attention and was described as "extremely odd, and creepy."

Carter said the photograph of her and Biden had been "misleadingly extracted" from her husband's swearing-in ceremony, and the former vice president had offered to support her. In an essay published Sunday on Medium, titled "The #MeToo Story That Wasn't Me," Carter said she wanted to "reclaim" the story behind the widely-discussed picture of her and Biden.

Biden's encounter with the teenage daughter of Democratic Sen. Chris Coons of Delaware, Biden's home state, has also received significant attention in recent days. At a swearing-in ceremony for Coons in 2015, a video captured Biden holding the upper arm of the senator's 13-year-old daughter, leaning into her and whispering into her ear while she appears visibly uncomfortable. The former vice president can then be seen kissing her on the head – a gesture that appeared to make the girl flinch. Coons said this week that Biden's behavior did not bother his daughter, who has known the former vice president her whole life.